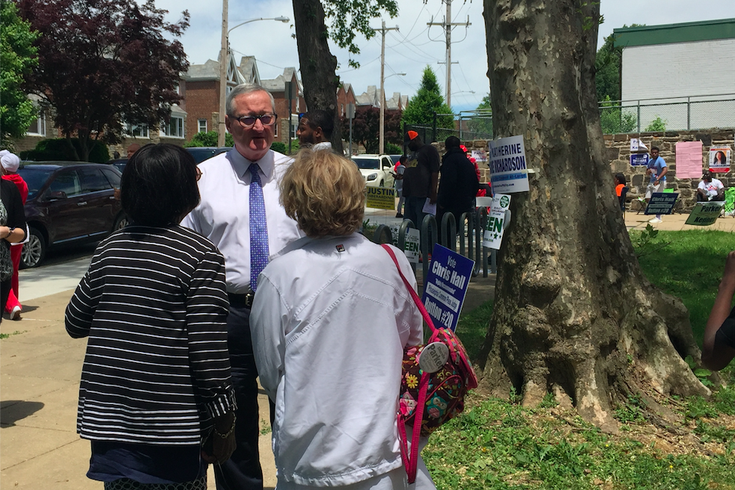 After arriving early for lunch at Relish restaurant in West Oak Lane, incumbent Mayor Jim Kenney visited the polling place at the nearby Finley Rec Center.

Jim Kenney, who was elected to serve as the 99th mayor of Philadelphia in 2015, took a major step toward re-election on Tuesday night when he bested two challengers in the Democratic primary.

He was declared the winner by the Associated Press, which called the race about an hour after polls closed.

With 36 percent of precincts reporting, Kenney garnered about 67 percent of the vote in a race where he again faced off against state Sen. Anthony Hardy Williams and former City Controller Alan Butkovitz.

According to early results, Williams finished second with 22 percent and Butkovitz was third with 11 percent, according to unofficial vote tallies.

Though it was a quiet primary – primarily because Kenney opted not to engage in more than one public debate with his challengers – much talk in the campaign revolved around the controversial soda tax championed by the mayor.

Kenney, a former city councilman, even kept a limited schedule on Tuesday, voting in Old City and attending a canvass kickoff event with AFSCME 1199C in the morning, with a stop at Relish restaurant and voting place visit at nearby Finley Rec Center in West Oak Lane early in the afternoon.

At Relish, he spoke about his discomfort in having to run for re-election while working as the mayor.

As it was four years ago, his Election Night party was held at the National Museum of American Jewish History on Independence Mall.

While Williams had yet to concede as of 9:20 p.m. – a campaign spokesperson said they were still watching results and would be closer to a decision in about 15 minutes – Butkovitz had done so.

"Kenney clearly won, and I wish him well in the election," he said. "We thought it was important that our issues be raised, the inaction on homicides in the city, a proactive strategy on creating jobs to combat poverty. I hope that he'll be a little sharper on those issues moving forward."

As with most Philadelphia mayoral elections, the primary tends to decide the winner. The last heated Democratic primary was in 1987, when incumbent Mayor Wilson Goode held off challenger Ed Rendell by about 60,000 votes.

Still awaiting him in the general election – and champing at the bit for the incumbent to agree to a debate – are Republican candidate Billy Ciancaglini – a defense attorney from South Philadelphia – and Milton Street, the perennial candidate and rabble rouser who recently announced that he was launching a campaign as an independent.

"It's what I expected," Ciancaglini told PhillyVoice moments after the race was called. "I'm going to try and reach the entire city. Now that Democrats are eligible to vote for me, I'm going to reach out to them, as I didn't speak to them as much before. Now I will.