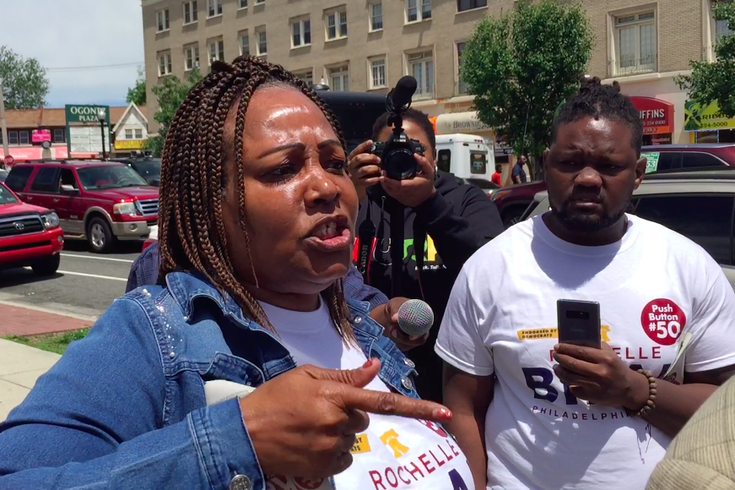 Rochelle Bilal, a candidate trying to unseat incumbent Philadelphia Sheriff Jewell Williams, said she was not permitted to enter the traditional Election Day gathering at Relish restaurant in West Oak Lane on Tuesday, May 21, 2019. She thinks it's because she dared to challenge the Democratic Party itself.

It’s an Election Day in Philadelphia, so it goes without saying that a little bit of drama broke out at a traditional lunchtime gathering of assorted political types.

The setting was Relish restaurant on Ogontz Avenue in Philadelphia’s West Oak Lane neighborhood, an event that – in many ways – has usurped the Famous 4th Street Delicatessen in Queen Village as the place for city politicians to see and be seen.

There, you had incumbent Mayor Jim Kenney who, upon arriving more than a half hour before his scheduled time, had a dining room pretty much all to himself before others showed up.

After some small talk – he said this campaign was different not only because he “didn’t have a job” when he ran four years ago, but it's more difficult for an elected official to campaign for reelection amid criticism for keeping a limited public schedule – he was asked about his message for those yet to vote.

The first reports of field drama came from Seventh District City Councilwoman María Quiñones-Sánchez, who once again is seeking re-election without backing from the Democratic party.

“There’s been some craziness: people claiming poll-watcher certificates so our watchers couldn’t get them, people with Cruz T-shirts in a polling place, literature at tables that we had to call the District Attorney’s Office about,” she said. "You know, the usual.

“It’s been slow at the polls," she added. "We might have to start dragging people out to vote!” 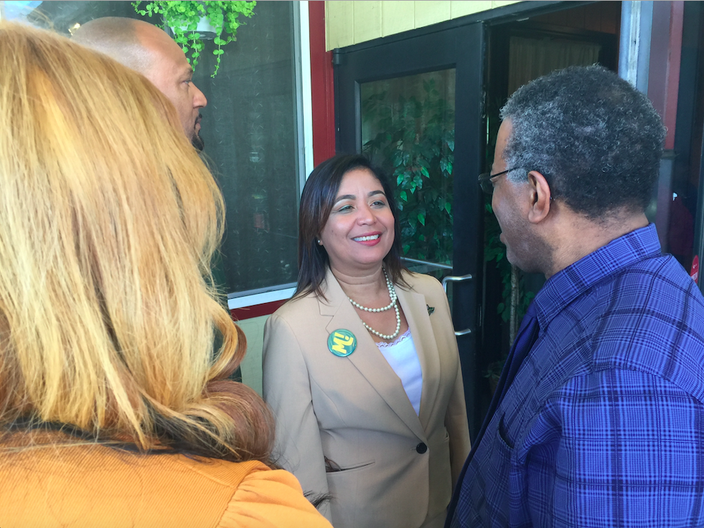 Seventh District City Councilwoman María Quiñones-Sánchez said she's heard of some electoral hijinks at polling places in her area, but that that's par for the political course.

‘I BELIEVE IN KARMA’

Among the office-seekers who sat down with WURD-AM radio inside the restaurant was incumbent Councilman At-Large Allan Domb.

With a campaign bank account flush enough to advertise on television early and often, he echoed Kenney’s sentiment about the challenges of running as an incumbent.

“You get a lot less sleep than usual, but what makes it easier is that I love both jobs,” said Domb, whose TV ads featured legendary Philadelphia boxer Bernard Hopkins. “His is an amazing Philadelphia success story. He literally turned his life around and became one of the greatest Philadelphians ever.” 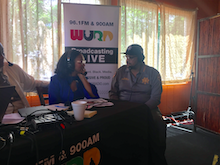 Also speaking to the live-radio broadcast was embattled Philadelphia Sheriff Jewell Williams, who didn’t seem keen on talking to other reporters at Relish. This, after allegations of sexual harassment led the city Democratic Party to yank its endorsement of him in April.

He mentioned that he’s heard stories about people tearing down his campaign signs in recent days, but that it didn’t much bother him because “I have 2,000 more signs to put up.”

“I believe in karma. If it’s God’s will, we’ll be there,” he said of his re-election prospects. “We’ve brought life to the Sheriff’s Department.”

One of Williams’ three primary opponents, Rochelle Bilal, was unable to hear those words, though. Outside the restaurant, she claimed that she was refused entry because she wasn’t on a guest list at the front door. (That list is controlled by the party organizers, not the restaurant itself.)

“I’ve come to this thing for five years and never had a problem getting in,” she said. “But that’s our Democratic Party in action. That’s what they do, they keep me out because I chose to run against that predator Jewell Williams.”

Bilal did say she’s running to change the “pay-to-play” nature of the Sheriff’s Office, and cited shortcomings including court security not catching the person who left a racist note in a judge’s chambers.

Erika Almiron, an activist and City Council at-large candidate, was able to get inside early to get a photo with Kenney, but said she also was turned away when she tried to get re-enter Relish. 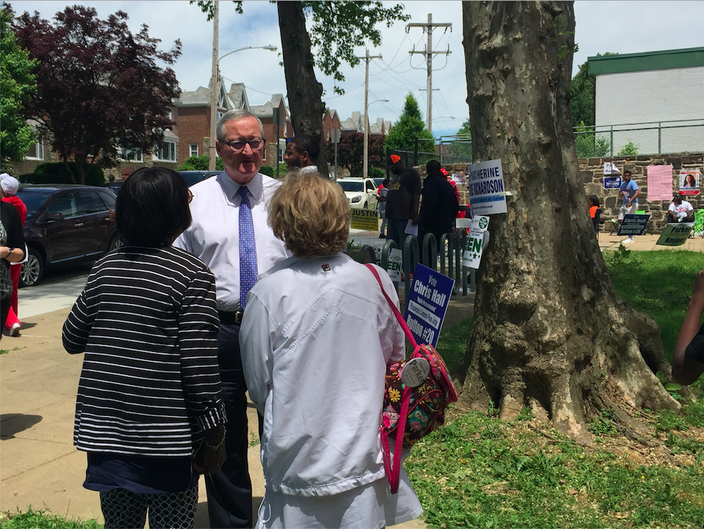 After arriving early for lunch at Relish restaurant in West Oak Lane, incumbent Mayor Jim Kenney visited the polling place at the nearby Finley Rec Center.

“I don’t know how these things work. They said my name wasn’t on the list,” said Almiron, who took the slight a lot better than Bilal.

But Bilal used the snub to mount a proverbial soapbox outside the restaurant, even as Williams stood mere feet away, surrounding by friends and campaign workers, his face buried in a cellphone for much of the time they were in close proximity.

A video captured by one of Bilal’s campaign workers, and shared with PhillyVoice, showed them walking into the building but not being allowed to enter.

“The person told me I wasn’t on the list so I couldn’t come in,” added Bilal, the head of the Guardian Civic League’s Philadelphia chapter. “There has to be change. We’re sick of bullies in the Democratic Party. I will not be bullied. Trust me: we are going to win this race because of that.

If so, she's going to have to accomplish a surprising victory on a day where reports of voter turnout focus on one word: low.