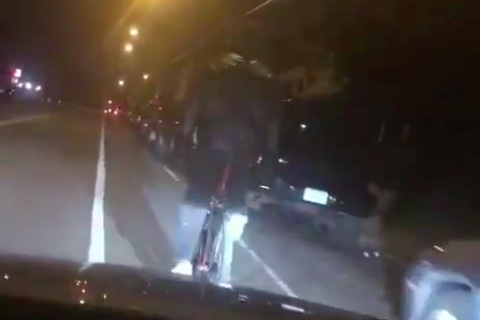 Video circulated on Twitter shows a driver in Philadelphia apparently strike a cyclist on purpose.

Philadelphia police have launched an investigation into a viral video on Twitter that appears to show a driver intentionally hitting a cyclist pedaling in the bike lane.

The video, published last Thursday by @BenjiinPhilly, provoked an angry response from droves of users who speculated on the legitimacy of the clip and condemned its poor taste. (Note: Video and tweet contain racially offensive language).

Several users responded to the video by tagging the Philadelphia Police Department with a request to look into it. Others questioned whether the incident was staged or if the cyclist was a mannequin, based on the cyclist's upper body movements after after impact.

One user suggested the incident appears to have been filmed along the 5200 block of Florence Avenue in Southwest Philadelphia.

A Philadelphia police spokesman said Lt. John Walker of the Southwest Detective Division will hold a press conference about the investigation Monday night at 6 p.m.

The video was published just two days before 34-year-old Pablo Avendano, an avid Philadelphia cyclist, was fatally struck by an SUV at 10th and Spring Garden streets. Avendano, who was making a delivery for Caviar at the time, was knocked off his bike and run over. The driver remained at the scene and cooperated with authorities.

Last November, 24-year-old Emily Fredricks was killed in a collision with a trash truck at 11th and Spruce streets.

Efforts to expand protected bike lanes in Philadelphia have picked up momentum over the past year, meeting some resistance from neighborhood groups and city officials concerned about vehicular traffic congestion. The city has vowed repeatedly to make progress on its commitment to Vision Zero, the multination road safety initiative that aims to eliminate fatalities through balanced urban design.