And they'll be prepared for an Eagles win 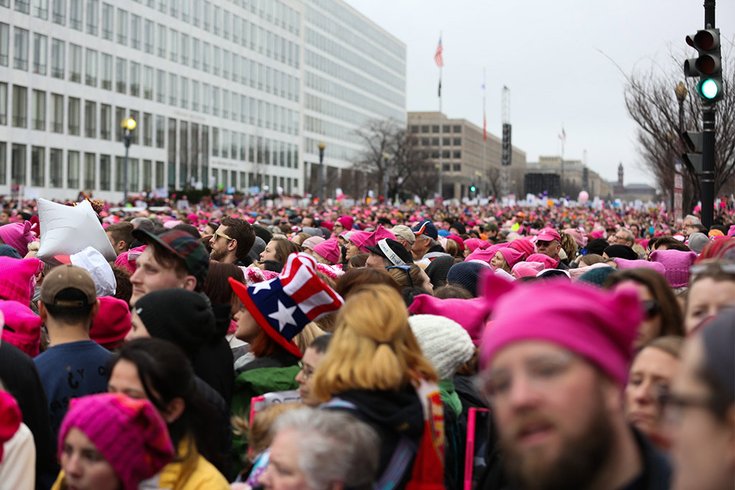 Protesters march in Washington D.C. for the National Women's March on Jan. 21, 2017. Marches will again be held Saturday across the nation, including Philadelphia, to rally for women's rights.

Speaking at a press conference, Wilson refuted rumors that police would subject march attendees to random stop-and-frisk searches at Saturday's event, which is expected to bring more than 50,000 people to the Benjamin Franklin Parkway.

"We're not searching people," Wilson said. "We have visual screening as participants go into the Parkway. There's entrance points, but no one is being stopped."

The Women's March on Philadelphia – a followup to last year's event – will begin at 10:30 a.m. at Logan Square. At 11 a.m., attendees will march along the Parkway to Eakins Oval, where several speakers will lead a rally.

Earlier this week, a message circulated on Facebook, urging people to skip the march due to the alleged stop-and-frisks. The message, shared widely, read as follows:

"The Women's March of Philadelphia thinks it's ok to collaborate with the police department to set up security checkpoints and conduct random searches on march attendees, ostensibly stopping and frisking them, putting those already targeted by law enforcement at an even greater risk."

Wilson called the message an "unfair characterization" of the security measures and the organization of the event.

"They had negative comments about the organizers inviting the police to this event," Wilson said. "They don't have a choice. It's public space. We have to look at each (massive event) and come up with a security plan."

Wilson reiterated that police will not conduct random searches on Saturday. But fireworks, weapons and illegal substances are forbidden.

"We had this last year," Wilson said. "It's a nice event. It's family-friendly, but it does draw a huge crowd."

To protect marchers, Wilson said police will utilize trucks and bike racks as barricades. The impacted streets will close at 5 a.m. on Saturday.

People wishing to join the march can enter Logan Square at three entrances: 20th and Race streets, 20th and Vine streets and 18th Street and the Parkway.

Those attendees who only want to participate in the rally can enter Eakins Oval at 22nd Street and the Parkway, Spring Garden Street and Pennsylvania Avenue, and 25th Street and Kelly Drive.

The Facebook page for the march discourages attendees from carrying bags, backpacks or satchels, saying they are subject to search and could create delays.

Millions of women marched worldwide last year on the Saturday following President Donald Trump's inauguration. In the ensuing year, the #MeToo movement emboldened women to speak out about sexual harassment and misconduct. Women called out numerous powerful men, including celebrities, journalists and executives.

The theme of the march is "We Resist. We Persist. We Rise."

"We stand against those in our country and society who seek to divide us and stifle the diversity that makes our nation great," the march organizers wrote on the event's Facebook page. "We will no longer allow the rights and interests of women and those who identify as women in mind, body or spirit to be disregarded."

Police also are preparing for mass crowds to take to the streets Sunday night following the NFC Championship game at Lincoln Financial Field – particularly if the Eagles win.

Police will have additional officers stationed both inside and outside of the stadium, Wilson said. District captains also have identified local hotspots to monitor following the game.

"They're historical locations where people come out to celebrate when one of our sports teams wins," Wilson said. "We'll have plenty of officers on hand to cover the hotspots."

Among the bigger hotspots – Cottman and Frankford avenues in Northeast Philadelphia and South Broad Street, from City Hall to the stadium complex.

No parking will be permitted on Broad Street from South Street to the stadium complex, beginning at 2 p.m. on Sunday.