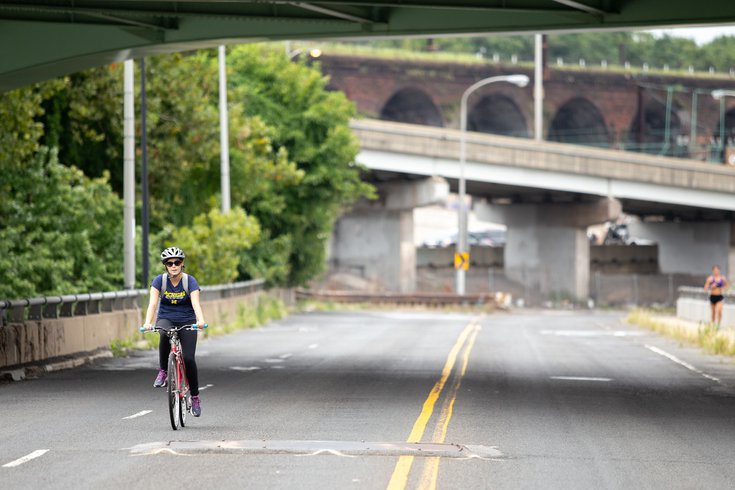 Martin Luther King Jr. Drive has beeen a popular space for Philly residents to safely exercise outdoors during the COVID-19 pandemic. The roadway will be reopening to vehicular traffic in August after 14 months without cars.

Any frequent user of Reddit will be the first to tell you that for all the information and knowledge available on the platform, there are days when opening up the site or app is a comically sad experience.

Overnight Thursday, a cyclist in Philadelphia took to the PhillyCycling subreddit to share a perplexing and morbid photo of a rat whose body had been painted over by a temporary line striping machine on Martin Luther King Drive. That photo made its way to the Philadelphia subreddit and drew a sizable response.

MLK Drive has been closed to vehicles since the start of the coronavirus pandemic, a decision the city made to facilitate social distancing for outdoor recreation. Much to the chagrin of cyclists and runners who have relished the car-free stretch, the road will be reopened to traffic next month.

In advance of the change, the city has been completing maintenance and improvements along the nearly four-mile long roadway, which runs through West Fairmount Park between the Schuylkill River and I-76 from Eakins Oval to the Falls Bridge. The work has included flood mitigation, installation of new lighting and road repaving and striping.

The Philadelphia Streets Department said Thursday that it was aware of the rat photo making rounds online and is not very happy with the contractor on the project.

"The contractor has been notified that this is unacceptable work, and this inappropriate act will be properly addressed," a spokesperson said. "The contractor was completing temporary markings in a line striping truck on a section of MLK when they noticed the rat. Before applying the permanent markings, the rat was removed. It appears the photo was taken in between the short period of time between the temporary and permanent markings. The Streets Department takes this matter very seriously. The integrity and safety of the city's roadways is a priority for the Department. It apologizes for the offensive nature of the photo."

The Streets Department did not provide the name of the contractor on the project and the Office of Transportation, Infrastructure and Sustainability did not immediately respond to a request for additional information.

Roadkill is an unfortunate reality of vehicular traffic. You hate to see it.

How much the contractor knew about the rat, and when exactly workers became aware of it, remains unclear. Line striping is often done in the dark using machines for precision. Work crews may not have realized what happened until the photo had already been taken, but the Streets Department believes the contractor should have been much neater about the project from start to finish, whether they knew about the rat and continued striping for efficiency's sake or not.

If the cyclist hadn't noticed the rat in the bike lane, they or another person could have potentially been hurt riding over it. The photo that was taken because someone did notice the rat is just a thing to be expected if that's what a person sees on their pleasant bike ride. Suffice it to say, it's never a great look to have a dead rat with paint on it in the road after a job paid for by the city.

As for the bigger picture? Stark photography of animals killed in this manner has an absurd way of amplifying their significance, or on the other end of the spectrum, bringing out humankind's grotesque irreverence in the face of a pretty cruel, Hobbesian world for all living things. The city undoubtedly has more pressing issues — rat infestations are among them — but it's still possible and perhaps only right to feel a little something for the soul that was lost, no?

In the best of all worlds, maybe the rat is a sign and a catalyst for broader conversations about the future of MLK Drive. The Bicycle Coalition for Greater Philadelphia and others have been urging this discussion over the past 14 months.

"Now is the time to do this," Bicycle Coalition policy director Randy Lobasso wrote in May, looking ahead to future disruptions in the area. "Over the next three years, construction is set to start on the rehabilitation of the MLK Drive Bridge (which will take two years), and then on the Falls Bridge (which will take about a year, according to estimates). Even if MLK Drive went completely back to the way it was pre-COVID, full access from bridge to bridge will be limited once bridge construction commences."

Nature works in mysterious ways. Let's hope this rat's demise can be turned into something positive and forward-thinking for MLK Drive in the coming years, since opinions from many stakeholders may differ on what should be done.

"It’s likely many of those folks do not see eye to eye over the future of the road at this point," Lobasso wrote. "But they all deserve to be heard and to have the city come up with a configuration that benefits them."