Philly really did put "Beer Week" on the global map 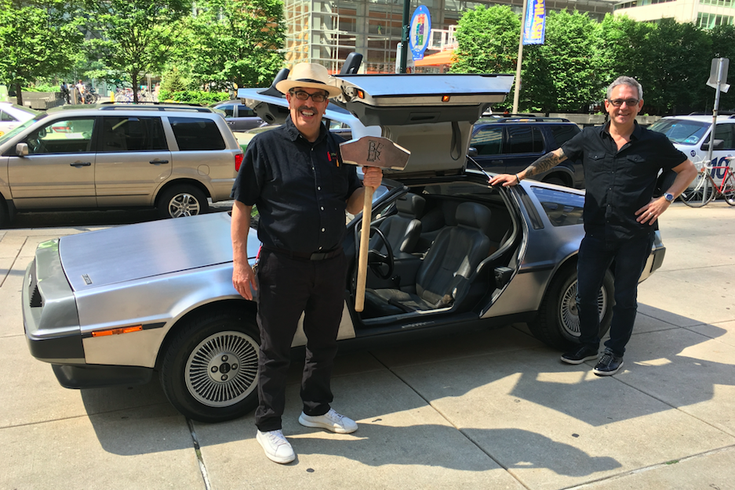 Tom Peters proudly holds the Hammer of Glory alongside Jason Evenchik in front of Evenchik's 1981 DeLorean outside Uptown Beer Garden in Center City on Wednesday, May 17, 2017.

It’s not the suds talking when Tom Peters, owner of Monk’s Café in Center City and co-founder of Philly Beer Week, says that Philly founded the very first “Beer Week” phenomenon in the world.

“It’s been so successful that more than 100 cities across the world have copied the whole idea,” Peters said before a crowd of press and beer drinkers outside the Uptown Beer Garden in Center City Wednesday afternoon.

“And so there’s an Amsterdam Beer Week. There’s a Brussels Beer Week. They’re all over the world…Montreal…And in fact, I was invited to go give a lecture at the Tokyo Beer Week next year, so I’ll have to brush up on my Japanese, which is – zero,” he laughed.

Founders and board members of Philly Beer Week joined together Wednesday to announce this year’s plans for the 10-year anniversary of the beloved celebration of Philly brews. Peters received a proclamation on behalf of Mayor Jim Kenney acknowledging the 10-day festival and Philadelphia itself as "America's Best Beer-Drinking City."

“This year will be a little bit different. Beer Week starts on a Thursday, so I hope everybody has already decided to take a sick day Friday,” said board president William Reed, owner of Johnny Brenda's and The Standard Tap in Fishtown.

“You will not regret that.”

Jason Evenchik, owner of the Vintage Syndicate, which is comprised of Time, Vintage, Heritage, Bar, Tiki, Garage Passyunk and Garage Fishtown, pulled his 1981 DeLorean (that’s right, the same make from the “Back to the Future" movies) onto the scene Wednesday outside Uptown Beer Garden to escort the Hammer of Glory (HOG), Philly Beer Week’s traditional mascot.

Philly Beer Week begins with Opening Tap on June 1 at the Fillmore and runs through June 11 with an assortment of beer-drinking events. For a full list, click here.