Despite hardships of COVID-19, these new eateries have big plans for the coming year 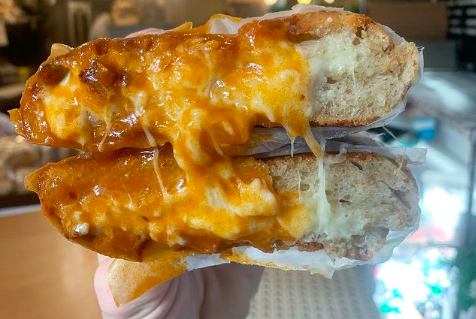 Matt Cahn's Middle Child will expand to Fishtown in 2021 with Middle Child Clubhouse, a swankier version of the Washington Square West diner-deli. The planned opening is one of four in Philadelphia recognized by Food & Wine in a list of the year's most anticipated new spots in the country.

As difficult and demoralizing as 2020 was for the restaurant industry in the United States, there are at least some signs of hope that 2021 will mark the beginning of a long and prosperous recovery.

To ring in the new year, Food & Wine looked across the country for 15 highly anticipated restaurant openings this year. Two of them are in Philadelphia, while two others are on track to open in Bala Cynwyd.

First up is West Philadelphia community space Honeysuckle, the brainchild of chef-poet Omar Tate. The alum of Philly and New York restaurants, including Fork and the now-closed Russet, conceived of the idea several years ago and began running a pop-up version of the restaurant last year during the COVID-19 pandemic.

Tate aims to open the brick-and-mortar Honeysuckle in Mantua later this year.

"I want to shift the notion of restaurant to a concept that doesn't just feed people, but focuses on nourishment," Tate said in a YouTube video, which accompanies a GoFundMe campaign for the restaurant. "Honeysuckle uses history, the arts, education, agriculture, commerce and food to pursue this mission. This is a multi-faceted concept."

Chef and artist Omar Tate, along with his wife and partner, chef Cybille St.Aude-Tate, plan to open their West Philadelphia community space in late 2021. Inspired by Tate’s pop-up dinner series of the same name, the Honeysuckle community center will include a grocery shop, café library, meat market, and supper club, which, according to Tate, aims to center and honor Black food.

To date, the Honeysuckle GoFundMe has raised more than $94,500. You can follow along with Tate's progress on the restaurant's Instagram page.

The second Philly restaurant mentioned by Food & Wine is Middle Child Clubhouse, an extension of Matt Cahn's Washington Square West diner-deli that opened in late 2017. This time, Cahn will be opening up shop in Fishtown:

In 2021, the alum of New York City’s Court Street Grocers and Superiority Burger will open Middle Child Clubhouse. A slightly swankier version of his modern sandwich shop, Middle Child Clubhouse will take inspiration from favorite East Coast eateries, including Upper East Side burger mainstay J.G. Melon. During the day, there’ll be a full coffee program and menu of salads and sandwiches, and by night, burgers and steak-for-two, plus local beer, cocktails, and natural wine.

Throughout the coronavirus pandemic, Middle Child's social media presence has been a mixture of activism and sarcastic humor. Its reaction to the Food & Wine plug, a faux denial, fits neatly into the second category.

Details about where Middle Child Clubhouse will land in Fishtown have not yet been released, but it figures to be another popular addition to the neighborhood. Follow Middle Child on Instagram for updates about the project.

The third and fourth Philly area openings in the works this year are two Montgomery County projects, The Landing Kitchen and The Lark, both from Philly food scene veterans Nick Elmi and Fia Berisha. Here's what Food & Wine had to say:

Philadelphia-based chefs and restaurateurs Nicholas Elmi (Laurel, In the Valley, Royal Boucherie) and Fia Berisha (Aether) have teamed up to bring two new dining concepts to the region. Slated to open in February, northwest of Center City in Bala Cynwyd, the riverfront all-day café the Landing Kitchen will showcase baked-in-house bread and pastries, breakfast and lunch options, and a dinner menu of small plates and seasonally-changing entrees. Lark, the duo’s coastal restaurant featuring sustainably-sourced seafood and handmade pasta, will open in March.

As we enter a second year of life in the age of COVID-19, these openings are welcome reminders that there will be good times to come on the other side of this. And for Philadelphia, it's a positive sign to see this much buzz and creativity around the culinary scene in the year ahead.