Thinking back on 2020: These were my favorite dishes from local restaurants 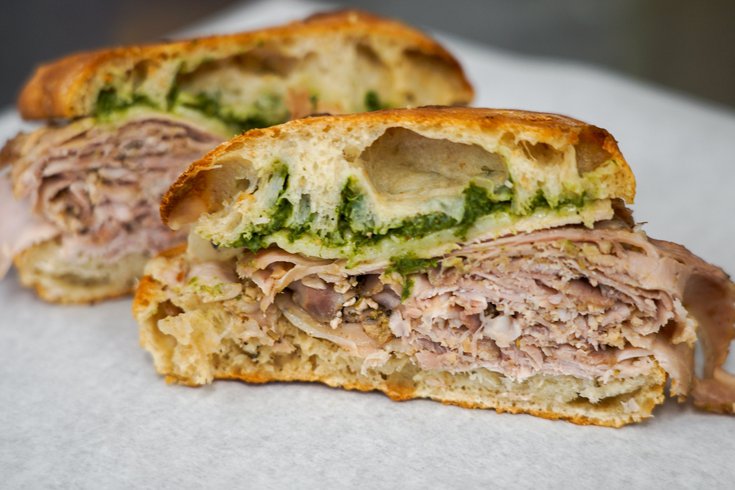 Porcos at 2204 Washington Ave. in Philadelphia serves porchetta sandwiches. They're all delicious, but two stand out as my favorites and made the list for best dishes I ate in 2020.

Food & Wine Magazine recently posted "The Best Dishes We Ate in 2020" and included a Philly cheesesteak and burger from Bucks County.

The article got me thinking about what I ate this year, the restaurants I visited before the pandemic and the takeout I ordered and outdoor dining I enjoyed during the city's COVID-19 restrictions.

Our city's restaurants, and all who work in the industry, have endured an incredibly tough year. But the food scene is still amazing despite all the hardships of 2020 and I want to celebrate it by giving recognition to some of the best bites I had throughout the year.

Food & Wine named two local dishes as favorites, but as someone who lives in Philly, I know there are so many more that should be included, too.

Right before the shutdown in March, I visited Michael Solomonov's Israeli grill Laser Wolf. It was actually my third time going to the restaurant in the short span since its opening and while everything was good, especially the salatim (assortment of vegetable side dishes) and pita, I was hooked on the tuna steak. It's a dish I haven't stopped thinking about since I had it months ago.

This year I also tried Porcos Porchetteria, which opened at the end of 2019. The walk-up restaurant with a takeout window serves porchetta sandwiches inspired by the ones found in and around Rome. The porchetta is thinly sliced and delicious, but it's the pork crackling and house-made ciabatta that really makes it exceptional.

Through the summer I'd split the Spicy Porker and the Cubano with friends during social distance hangouts in the park. And I recently found out they offer breakfast sandwiches now, too.

Another summertime favorite, if I could get it, was 1-900-ICE-CREAM. They make new flavors every week or so, then send out an email to anyone who signs up to be on the "flavor drop" list. After that, it's up to you to order the pints, sometimes for pickup and sometimes for delivery, before they sell out.

I had a pint in June called Sami Strawberries with roasted, whole bean Madagascar vanilla ice cream and a strawberry jam swirl that was unbelievably flavorful for being so simple. I wish I had an entire freezer's worth right now. If you really want to make yourself drool, check out their Instagram featuring their many different flavors.

More recently, one of my favorite places to stop by or order takeout from is Bad Brother in Fairmount. Before the current ban on indoor dining, they were doing deals on cheeseboards and bottles of wine on Wednesday nights. It was an excuse to get out during the week, while also supporting a local, family-run business.

I would sometimes order dinner as well and while I tried most things on the menu (and loved them), I always returned again and again to the sausage roll made with ground chorizo, queso and pickled peppers and onions on a seeded roll. I've had it hot at the restaurant, cold the next day at home and for takeout plenty of times, and it's always held up. I'll probably order one this week.

I also ordered takeout repeatedly from Manoa Tavern, located a short drive away in Delaware County, whenever possible. People in the neighborhood rave about their cheesesteak egg rolls, which are made with Mongolian marinated beef and Cooper sharp cheese, but I have a different favorite on the menu. It might be a little basic to some, but the Caesar salad with a giant, house-made crab cake was the comfort food I craved the most frequently during the pandemic.

While these are my picks based on where I dined and ordered from throughout 2020, they're only a sampling of what Philly has to offer. I also asked the rest of the PhillyVoice team about the best dishes they ate this year and got a few responses.

"A lot of mussels dishes usually come soaked in a white wine sauce. However, Ambrosia’s come in a saffron broth with shallots and chopped parsley," said Ralph. "And while it’s listed as a starter on the menu, it’s big enough to be an entire main course."

"I have been going to The Red Rooster Inn in Northeast Philly for years and my go-to dish is always their coconut shrimp. The golden coconut encrusted shrimp are juicy with the just right amount of crunchiness," she said.

I would love to hear from our readers, too. Share in the comments some of the best dishes you've had this year from a local restaurant or eatery. A lot of places could use some extra support right now.