8 concerts you need to see this weekend 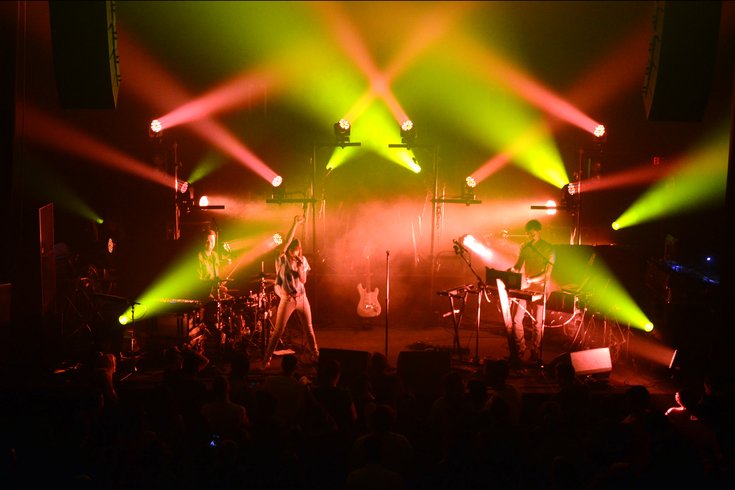 Union Transfer, one of the city’s newer major concert halls, distinguishes itself with excellent sound and light quality, along with a stellar selection of microbrews and tasty vegan fare. All ages can enjoy indie, hip-hop, punk and dance acts.

If the warm weather isn’t enough to bring you out of the house this weekend, Philly’s consistently busy live music schedule no doubt has something to offer. From live DJ sets to intimate acoustic shows, check out our roundup of this weekend’s best live performances below.

All shows are 21+ unless otherwise noted.

After forming more than a decade ago, Museyroom — the Philly-meets-Brooklyn trio of Jack Donovan, Ben Cohen and Matt Coppola — has finally announced plans to release a debut album. That album, "Pearly Whites," was announced in November with the release of a sweet-sounding lead single called “Ballad.” Thursday night, the guys show off some of the new record at Ortlieb’s before the official release later this month.

Will Holland is a multi-talent — a DJ, instrumentalist and producer rolled in one — known by fans primarily as Quantic. Since 2001, Holland has released more than a dozen albums, remixed songs and played on albums from the likes of Alice Russell and The Whitefield Brothers, touching on disparate genres along the way. Thursday night, Quantic brings his “Tropical Elevation” tour to The Ardmore Music Hall.

St. Louis indie rock band Foxing released their sophomore album this past fall in the form of "Dealer," a heart-wrenching follow-up to their debut, "The Albatross." The five-member band adds on a sixth for touring duties, and despite a mishap at a recent performance — lead singer Conor Murphy reportedly had his nose broken by an unruly fan — their Friday night show at Union Transfer will definitely go on.

West Philly’s Matthew Law is bringing out a very special guest to his monthly Friends & Fam party at Kung Fu Necktie this Friday. Benji B, the British DJ and BBC Radio 1 host, will join the usual festivities as a part of his just-announced North American tour. Law’s Friends & Fam is always a hit, but Benji B — who pulled a credit on Kanye West’s latest album — makes this one a definite can’t-miss.

Mickey Factz is a quiet veteran: After years on the mixtape and battle rap circuit, the emcee landed himself a spot on the coveted XXL Freshman Cover in 2008 and aligned himself with Lupe Fiasco shortly after. Factz is still grinding and arrives at The Fire Friday night.

It’s been almost a decade since Daniel Lopatin released his first album as Oneohtrix Point Never, and his latest, his seventh overall and second for the renowned British record label Warp, finds him at his most ambitious. Lopatin offers fans a measured dose of familiarity with "Garden of Delete" — certain hallmark synth timbres rise up like old friends — but he’s also ventured into remarkably new territory. Given the sounds that Oneohtrix has conjured up, the album will fill every nook of Union Transfer when Lopatin performs on Saturday night for an all-ages crowd.

Greg Dulli is known to most as either the lead vocalist for The Afghan Whigs or the Twilight Singers, but he’s been a prolific solo artist and collaborator elsewhere as well. Dulli, who was born in Ohio, kicked off a North American tour this week that delivers fans a live breakdown of much of his career output along with some new material.