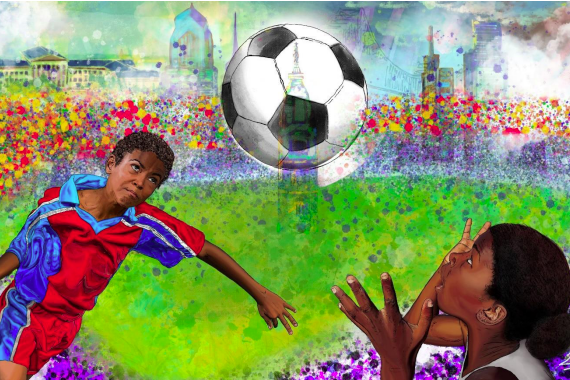 Mural Arts Philadelphia has created a digital mosaic, shown above, as part of Philadelphia's bid to host the 2026 FIFA World Cup. Soccer fans can submit their photos to be added.

Philadelphia soccer fans can add their photos to a digital mosaic being created as part of the city's bid to host the 2026 FIFA World Cup.

The city's bid committee has partnered with the Mural Arts program to create the mosaic, titled "Love of the Game." People are encouraged to upload photos demonstrating their passion as players or fans through Feb. 28.

If Philadelphia is chosen as one of the 10 World Cup host cities, the committee and Mural Arts plan to have the mosaic physically rendered in celebration.

"Love of the Game" was designed by Nilé Livingston, a West Philly native and founder of Creative Repute. It was commissioned as a testament to the passion and drive in Philadelphia, particularly among its sports fans. The mural was unveiled Monday at Lincoln Financial Field, the proposed venue if FIFA chooses Philadelphia as a host city.

"At the very core of Mural Arts is a passion for using the transformative power of art to ensure equal access to resources and opportunities," Mural Arts Executive Director Jane Golden said. "While this mural, designed by Nilé Livingston, celebrates our hope of winning the bid, it also celebrates the important mission of growing the game of soccer. We are so excited to launch this digital mural during Mural Arts Month because art, like sports, is a participatory experience."

Mural Arts, the largest public art program in the country, has more than 7,500 murals across the city. It often partners with organizations to provide a platform for public expression and restoration of public art.

Today we launched the Love of the Game digital mosaic with our friends @MuralArts, but we need your help filling it in - go to https://t.co/aEKl3sXDpG to add a picture of your Philly passion to this piece of World Cup Bid history. #TheBidIsOn #MuralArts pic.twitter.com/tqbrKzdM8l

"To have thousands of local soccer fans be able to support our bid by being an active part of this digital mural will only further demonstrate to FIFA, CONCACAF and U.S. Soccer the passion we have for hosting the World Cup in 2026," said Daniel J. Hilferty, the incoming Chair of Philadelphia Soccer 2026, the city's bid committee. "We are delighted to partner with Jane Golden, Nilé Livingston and Mural Arts Philadelphia to bring this digital mural to life and we look forward to finding it a physical home in Philadelphia when we are successful in winning the bid."

Soccer fans can submit photos on Philadelphia Soccer 2026's website. Once approved, applicants will receive notification that their photos will be included. It may take up to 48-72 hours for a photo to be approved.