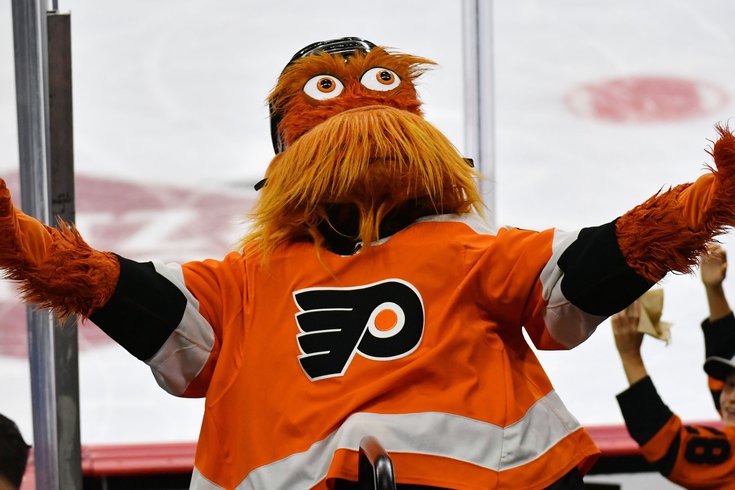 Gritty may have been busy cheering on his favorite hockey team Saturday night, but a spoof of the Flyers mascot appeared during a sketch on 'Saturday Night Live' this weekend.

Gritty was busy Saturday night cheering on his beloved Flyers against the Florida Panthers at the Wells Fargo Center, a game which the orange and black lost 4-2.

But a fake version of the Flyers mascot was featured during a sketch on "Saturday Night Live" this weekend.

The fake daytime television show is described as featuring "hardcore masculine energy"— including lots of pranks, "sneak up surprises," awkward male dancing and men getting into fights.

Among the show's pranks include Gritty busting into random women's bathrooms, according to Sudeikis' character.

The sketch cuts to a mock version of the Flyers mascot sneaking into a women's bathroom. Gritty then forcibly kicks down a stall door, showing a startled Chloe Fineman trying to use the bathroom.

"What the f*ck are you doing?!," Fineman screams at Gritty as he sprints out of the bathroom.

Fineman then catches up to and tackles Gritty and starts beating up the Flyers mascot in the hallway.

Gritty has had his fair share of appearances and jokes on the sketch comedy show over the last three years. The Flyers mascot appeared during the "Murdur Durdur" sketch from earlier this year.

Gritty was also made fun of several times on "Weekend Update" in early 2020 after the Flyers mascot was accused of punching a 13-year-old boy in the back. We'll certainly see more Gritty jokes on "Saturday Night Live" in the future.

This weekend's episode also featured a sketch mocking both the signing of the Declaration of Independence in Philadelphia in 1776 and the plot of the 2004 film "National Treasure." The sketch showed the Founding Fathers debating over whether they should put a secret treasure map on the back of the historical document.

The "Ted Lasso" star Sudeikis was the guest host of this weekend's episode. Brandi Carlile was the musical guest.

Full episodes of "Saturday Night Live" can be watched on YouTube or Peacock, NBCUniversal's streaming service.