What you need to know about Allegiant Stadium's COVID-19 vaccine policy and tailgating rules, as well as the local Eagles' bars, the weather forecast and a primer on Nevada's pot laws 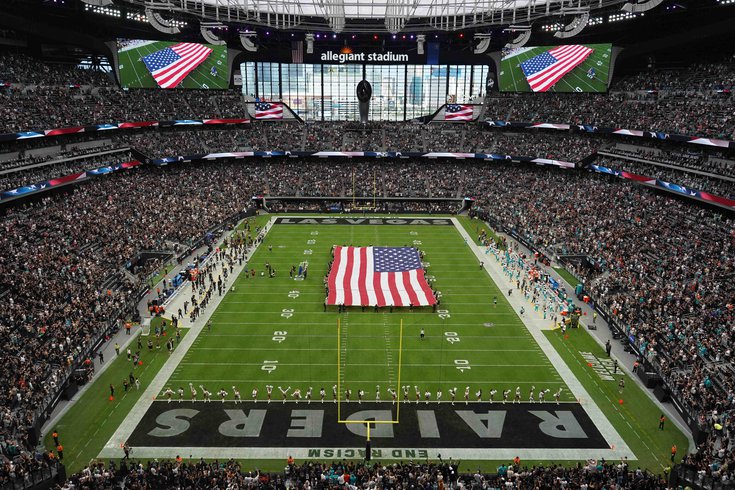 Thousands of Eagles fans are expected to travel to Allegiant Stadium in Las Vegas for Sunday's game with the Raiders. Below is information COVID-19 restrictions and protocols at the stadium and elsewhere in the city, this weekend's weather forecast; the rules and options for tailgating and other information about things to do in Las Vegas.

The Philadelphia Eagles hit the road in Week 7 to take on the Las Vegas Raiders in a game that well-traveled Birds fans likely circled on their calendars as soon the NFL released its 2021-22 schedule.

Sunday's game marks the first time the Eagles will play at the Roomba-like Allegiant Stadium, the Raiders' $1.9-billion, domed facility that opened last year in Paradise, Nevada, a town about 6 miles south of downtown Las Vegas. After decades in Los Angeles and Oakland, the Raiders have created a premier destination to which traveling NFL fans can plan weekend trips in the Entertainment (and gambling) Capital of the World.

Kickoff on Sunday is scheduled for 4:05 p.m. Eastern Time (1:05 p.m. Pacific Time), and the game marks another tough test for the 2-4 Eagles, who have faced a gauntlet of top-tier opponents to start the season. The Raiders, 4-2, are coming off an AFC West divisional win last week against the Denver Broncos but also are in the midst of a transitional period after the resignation of head coach Jon Gruden. Old, offensive emails Gruden sent were unearthed during the league's investigation into the Washington Football Team.

Eagles fans attending Sunday's game have plenty to consider for their trips to Las Vegas – from tailgating options to entertainment and important local COVID-19 regulations they will have to follow over the course of the weekend.

We've got you covered with the information you'll need to make the most of your weekend in Las Vegas.

Fans must be vaccinated for COVID-19 to enter Allegiant Stadium

Everyone 12 and older attending the Eagles-Raiders game on Sunday must show proof of COVID-19 vaccination to be permitted inside Allegiant Stadium. Back in August, when the Raiders announced this, they became the first NFL team to require fans to gets their shots before watching games in person.

The easiest way to prove you are vaccinated is by downloading the free, mobile app Clear. It asks users to upload selfies and vaccination cards which are then verified through image-recognition and biometric data software.

If you do not use the Clear app, you can show your vaccination card and a form of ID at an alternate screening station at Allegiant Stadium. Negative COVID-19 tests will not be accepted in the place of proof of vaccine.

Everyone headed to Las Vegas, fully vaccinated or not, needs to pack some masks. Nevada has an indoor mask mandate that applies to everyone. 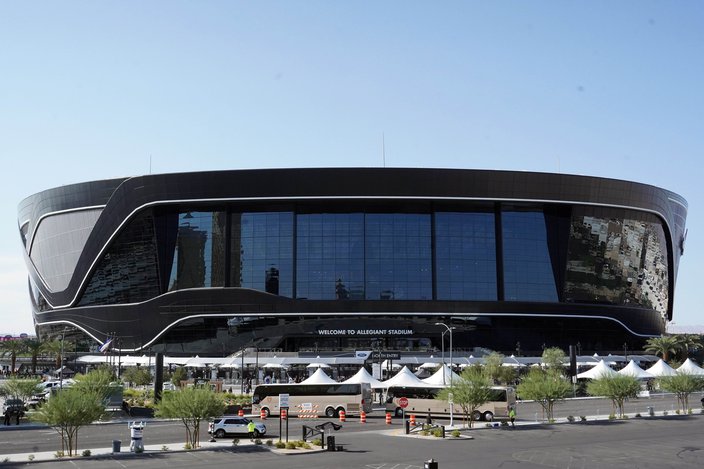 Fans going to Allegiant Stadium for Sunday's game between the Philadelphia Eagles and Las Vegas Raiders should download the mobile app Clear to provide proof they have been vaccinated for COVID-19.

Enjoy the Vegas sun this weekend

While the Eagles are the No. 1 reason Philly fans are flocking to Las Vegas, the comfortable, desert weather is a close second. The weather forecast shows it will be sunny and warm on Sunday afternoon. Here's the forecast for the whole weekend:

FRIDAY: Mostly sunny, high near 83 degrees throughout the day; cooler in the evening, lows around 60.
SATURDAY: Sunny in the afternoon, high temperature of 77 with wind gusts up to 18 mph.
SUNDAY: Sunny and warm on game day, high near 78 and low near 60 degrees.
MONDAY: Partly sunny with a high near 74 degrees and rain likely after 11 a.m.

There are Eagles bars in Las Vegas and a Chickie's and Pete's, too

For Las Vegas first-timers, or those looking to hang with other Eagles fans this weekend, the Torrey Pines Pub, at 6374 W. Lake Mead Blvd., is sure to be Birds-friendly. The bar does tend to be packed on game days, according to a compilation of NFL team bars by the Las Vegas Review Journal.

An at-home favorite, Chickie’s and Pete’s opened a restaurant at the Sahara Las Vegas on Oct. 6. The sports bar chain that started in Northeast Philly originally announced plans for a westward expansion back in 2019. Though the COVID-19 pandemic and its impact on sports and businesses delayed the grand opening by nearly two years, the team at Chickie’s and Pete’s Sahara are excited to welcome Eagles fans to their new location, whether it's to watch the game or just stopping by for Crabfries.

Unique to the Las Vegas Chickie's and Pete's location, the restaurant features a William Hill Sportsbook where guests can place bets on the Eagles-Raiders game or any other sporting event, Eater reported.

Other Eagles-friendly bars in the area include Blondies Sports Bar & Grill, whose website includes a detailed reservation page for game days, along with a map of the seating arrangements at the bar, so fans know they have good seats to watch the game or to celebrate – or commiserate – in afterward.

There are tailgating options at and around the Raiders stadium 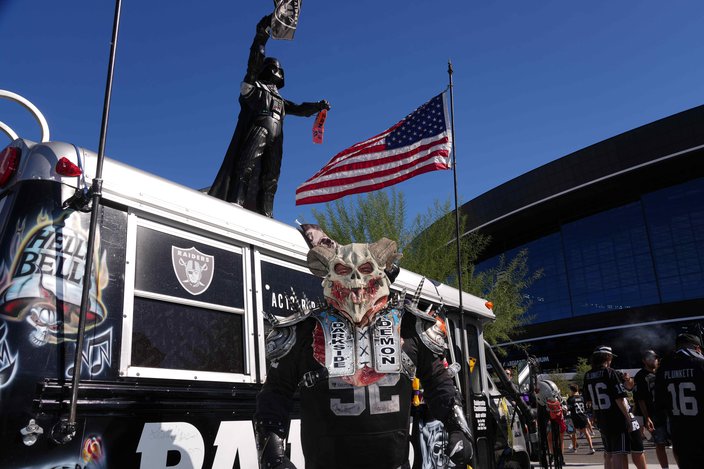 Raiders fans rival Eagles fan in their passion and tailgating prowess. Above, Raiders fan Gabriel Andrade, dress as Darkside Demon, poses during a tailgate before a game in September.

The Raiders' loyal and rabid fanbase is among the few in the NFL that can legitimately go toe-to-toe with Eagles fans. A certain level of respect has grown between these two teams, who once met in Super Bowl XV and typically only match up every four years.

That history, combined with the novelty of Las Vegas for Eagles and Raiders fans alike, should make the new tailgating experience at Raiders games a welcoming atmosphere with light-hearted competition between two fanbases that can handle a little trash talk.

Tailgating in the Allegiant Stadium parking lots is covered by the guest code of conduct, which spells out the rules and behavior expected both before and during the game.

Fans are permitted to tailgate in the stadium parking lots, but all tailgating activities are limited to areas directly in front of or behind vehicles, up to the emergency access lines painted in each row. Tailgating in open parking spaces is prohibited and guests must use appropriate garbage receptacles.

Notably, for fans who traveled in large groups, oversized vehicles longer than 20 feet and trailers are not permitted at the stadium. Owners of RVs and oversized vehicles are advised to contact the Oasis Las Vegas RV Resort, which is located about 4.5 miles south of Allegiant Stadium and offers a huge RV campground. The Raiders have a relationship with the resort and offer a free shuttle service to and from the stadium on game day.

Fans looking for more of a casino-style tailgate within walking distance of Allegiant Stadium can check out the Bud Light Beer Garden, located between the Mandalay Bay and the Luxor. Opening four hours before kickoff and still rocking after the game, the 130,000-square-foot space is situated at the corner of Las Vegas Boulevard and Hacienda Avenue.

Entry to the Budlight Beer Garden is free and fans will find all kinds of food, drinks, games and live entertainment.

Marijuana is legal in Las Vegas, but know the rules

Eagles fans who are over 18 years old and want to show their true green colors will have plenty of options to purchase marijuana and pot edibles, but there are a number of important rules and laws to follow.

You can browse this map of Las Vegas dispensaries or check out recommended places to buy edibles, but those who purchase these items should exercise caution.

It isn't worth the risk of trying to bring marijuana into Allegiant Stadium, since it's a smoke-free facility and the list of prohibited items can be construed to include any item deemed to be "dangerous, inappropriate or disruptive to other guests’ enjoyment of the event," in addition to "illegal drugs and drug paraphernalia." There is the risk that marijuana, in any form, could be confiscated at the gates.

After your stay in Las Vegas, it's also important to remember that federal law still treats marijuana as an illegal drug. Even if fans are flying between states where marijuana is legal (in Pennsylvania, it's not), it remains against the law to take pot products on flights.

Getting caught with marijuana at an airport can lead to murky legal territory. TSA officers do not specifically search for marijuana, but if they come across it, they are legally obligated to report it to police, who may take action or otherwise require you to ditch it before boarding a flight.

How these situations are handled may vary from place to place, and possessing a state medical marijuana card might improve a person's chances of leniency, but travelers are advised not to attempt taking any of these items into airports or on planes.

Lastly, those who may be excited about Las Vegas' move to create cannabis lounges will still be a bit too early to take advantage of that this time around. These businesses won't begin opening until 2022.

For those looking for some non-football activities to do – that don't involve sitting casinos and gambling or just sitting poolside in the sun nursing your hangover – check out this compilation of events happening in Las Vegas this weekend from Thrillist.

It includes Las Vegas Seltzerland, an afternoon hard seltzer taste test at the Angel Park Golf Club. There are general and VIP tickets available, starting at $39. Guests will have access to the taste test, which includes more than 30 different kinds of seltzer, along with food, games, and activities.

There also are tickets still available for the Aquarius Film Festival, which begins Saturday at 11 a.m. at the Art Houz Theater, at 804 S. Third Street. Festival passes start at $55, and allow guests to view any of the available screenings.

And the return of the Electric Daisy Carnival also is happening this weekend in Las Vegas, and although the big music festival on the Motor Speedway is sold out, some last minute tickets for performances and club events are still available through the conclusion of the week-long event on Tuesday, Oct. 26.