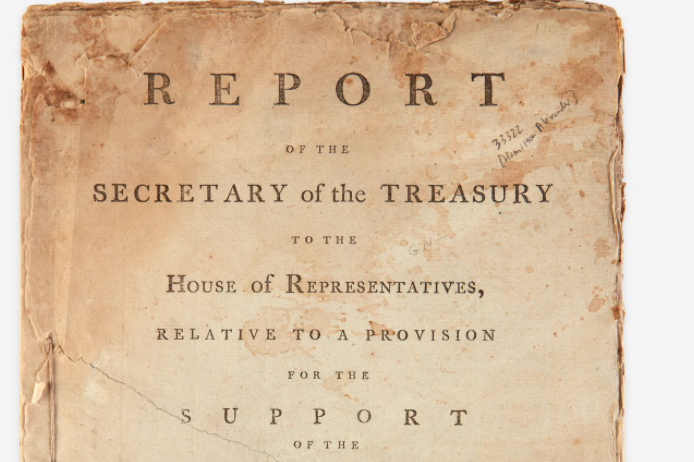 A first printing of the 'Report of the Secretary of the Treasury to the House of Representatives,' which outlined Alexander Hamilton's economic policies, sold for nearly $82,000 at a Philadelphia auction.

A unique assortment of Alexander Hamilton items, highlighted by a report considered to be the landmark document of American capitalism, sold for nearly $600,000 Monday in Philadelphia.

"The Alexander Hamilton Collection," an array of rare personal and professional documents, including some that were signed by the Founding Father, was auctioned off in 44 lots by Freeman's.

The collection's highlight, a first printing of the "Report of the Secretary of the Treasury to the House of Representatives" sold for nearly $82,000. The document, which outlined Hamilton's economic plans for the young nation, was estimated to sell for $30,000-$50,000. The report helped establish the U.S. financial system as we know it.

Other historical documents highlighting Hamilton's work at the Treasury Department and his negotiations for public credit sold for as much as $63,000.

A rare, first edition of the infamous "Reynolds Pamphlet" sold for more than $10,000, hitting its pre-auction estimate of $8,000-$12,000. Printed in Philadelphia, the booklet is Hamilton's summary of his affair with Maria Reynolds. He admitted to the relationship but claimed he was extorted by Reynolds and her husband. He insisted he wasn't corrupt.

"The buyers that participated in the sale were a very dedicated and passionate group that were all determined to bring home a piece of American history — and we're thrilled to have sold all lots offered, thanks to them," said Darren Winston, Freeman's books and manuscripts department head.

The Hamilton collection was put together by John Herzog, the founder of the Museum of American Finance in New York City. Herzog collects financial documents from the Federalist Era, which lasted from 1789-1801. During that time, Hamilton's political party controlled most of the U.S. government.

Herzog's background in finance led to him developing a deep-rooted interest in Hamilton, specifically in collecting documents from the period Hamilton served as the nation's first treasury secretary under President George Washington from 1789-1795.

Earlier this year, a rare signers' copy of the Declaration of Independence was sold for $4.42 million at a Freeman's auction. The document's final price was more than five times its pre-auction estimate of $500,000-$800,000. It's the second-highest price ever paid for any copy of the Declaration of Independence, and the highest price ever paid for an American document printed in the 19th century.