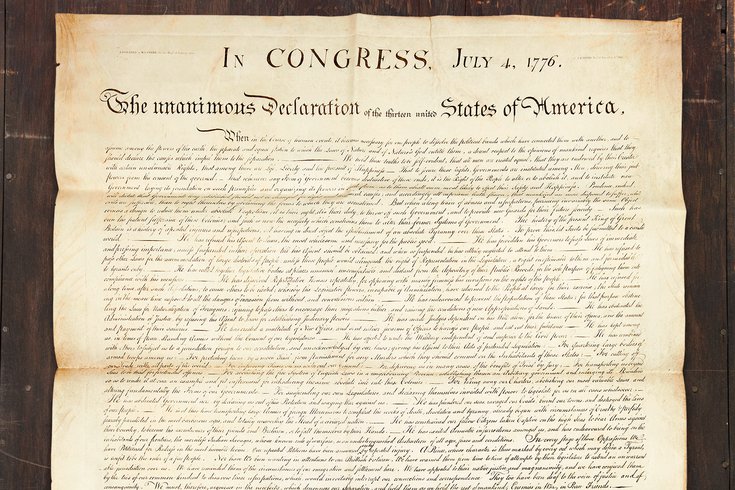 Only 201 copies of the 1823 William J. Stone engraving of the U.S. Declaration of Independence were produced and given to surviving signers and statesmen. The copy above, presented to Charles Carroll, the last surviving signer, was found at a home in Scotland and sent back to Philadelphia to be auctioned.

A rare printing of the Declaration of Independence once presented to Charles Carroll, the last surviving signer of the original document, sold for $4.42 million Thursday in Philadelphia.

The final price, which includes the buyer's premium, was more than five times its pre-auction estimate of $500,000 to $800,000. The price was confirmed by a spokesperson for Freeman's Auction, which orchestrated the sale.

The 1823 printing is one of 201 parchment copies produced by engraver William J. Stone amid a wave of patriotism that followed the War of 1812. It is among 52 known to have survived.

The copies, commissioned by then-U.S. Secretary of State John Quincy Adams, were presented to official repositories, significant officeholders and the surviving signers of the Declaration of Independence.

At the time, there was growing recognition that the Founding Fathers were nearing the end of their lives. That same spirit led Philadelphia to rename its five public squares after historical figures, including George Washington and Benjamin Franklin, in 1825.

Stone labored for three years on his copperplate engraving, which is considered the most precise rendering of the Declaration of Independence ever produced. The engraving is known for showing the text of the original document and its signatures in facsimile. Its size, at 24 x 30 inches, also closely resembles the original.

A line at the top of Stone's engraving distinguishes it from other renderings made at the time. It reads: "Engraved by W.I. STONE for the Dept. of State by order/ of J.Q. ADAMS Secy of State July 4th 1823."

The auctioned copy is the last of six signers' copies known to be privately held. It is one of two presented to Carroll, a U.S. senator and the only Catholic signer of the Declaration of Independence.

The document was handed down to Carroll's granddaughter, Emily Caton, and her husband John McTavish, who had his name inscribed on it. The copy was subsequently passed through a Scottish family, but it disappeared for 177 years before being found in an ancestral home in Scotland.

The other copy given to Carroll is included in the collections of the Maryland Center of History and Culture.

The auctioned copy will be exhibited by Freeman's this fall.

Earlier this year, the American Philosophical Society revealed that it had discovered a paper copy of the Declaration of Independence engraved by Stone. It is one of eight paper copies known to exist.