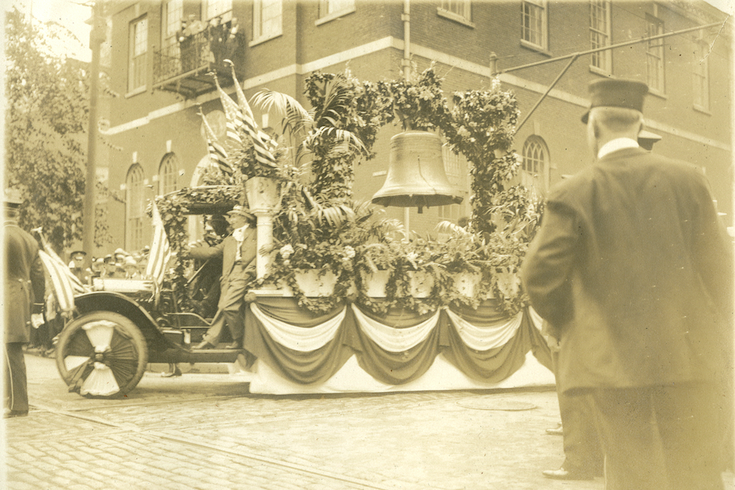 The Liberty Bell leaves Independence Hall on a truck before making its final journey – by train – across the United States in 1915.

Some 18,000 people pass through the Liberty Bell Center on any given day, enduring lengthy waits to gain a few minutes up close to the famously cracked bell.

The long lines that form outside the center's entrance at Sixth and Market streets are a familiar sight to any Philadelphian wondering through Old City. But there was a time, just over a century ago, when those crowds gathered elsewhere to see the Liberty Bell, helping cement its status as a cherished American relic.

The Liberty Bell hit the road for seven promotional tours between 1885 and 1915, traveling to various expositions across the United States. What started with a trip to New Orleans, in part to inspire reconciliation during the aftermath of the Civil War, eventually ended with a cross-country trip to San Francisco, a city rebuilt from a disastrous earthquake.

RELATED: How does one clean the Liberty Bell?

The Liberty Bell has not left Philadelphia since returning from California in November 1915. It is unlikely to do so again, despite the success of its prior journeys. After all, the fragile bell remains a big draw for the city.

"There was a cry for it to tour the country during the Bicentennial," said Robert Giannini, senior museum curator for Independence National Historical Park. "That was pretty much shot down. We needed it here."

Few people, if any, know the Liberty Bell better than Giannini, who joined the park's staff 45 years ago. In addition to conducting research, he's monitored its physical condition over the years. And when the Postal Service sought to depict the Liberty Bell on the first "Forever" stamp, it sent Giannini searching for the best image. 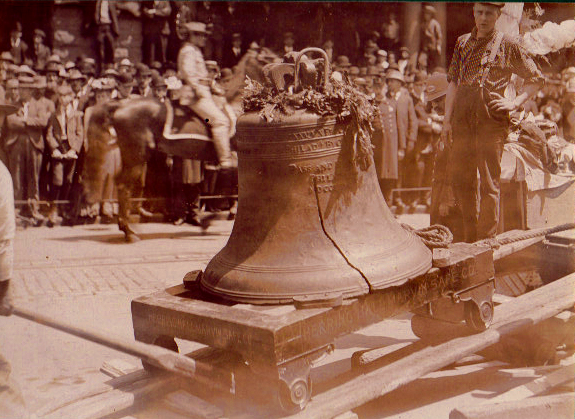 Riggers secured the Liberty Bell to a dolly to move it during a trip to Charleston, South Carolina in 1902.

"I always like to tell people that even though the bell was silenced by the crack and the drilling out of the crack, the inscription is the important thing on the bell," Giannini said. "It says 'Proclaim liberty throughout all the land unto all the inhabitants thereof.' I think that's the message. Even though it's silenced, it's still screaming this message that's on the upper portion of the bell."

That message particularly resonated with the abolitionists who first dubbed the State House bell as the Liberty Bell in the 1830s. Poets and writers later began telling its story, sometimes erroneously, transforming the bell into a national symbol. By the 1876 Centennial celebration, it was as iconic as the Pennsylvania State House, better known as Independence Hall.

Nine years later, the Liberty Bell hit the road, heading to the World's Industrial and Cotton Centennial Exposition in New Orleans, with much fanfare. Over the next three decades, millions of people watched the Liberty Bell pass through their towns.

Jefferson Davis, the former Confederacy president, was among the first to greet the bell. Despite being ill, he rushed from his Mississippi home to speak at its reception ceremony, according to an account published by the Daily Picayune.

"I thank you and your associates, and trust that your anticipations of the harmonizing tendency if this journey of the old Bell across the States of the Union, some of which had not sprung into existence when its tones first filled the air, may be in every respectfully realized," Davis said. "Glorious old Bell, the son of a revolutionary soldier bows in reverence to you, worn by time, but increasing in sacred memories." 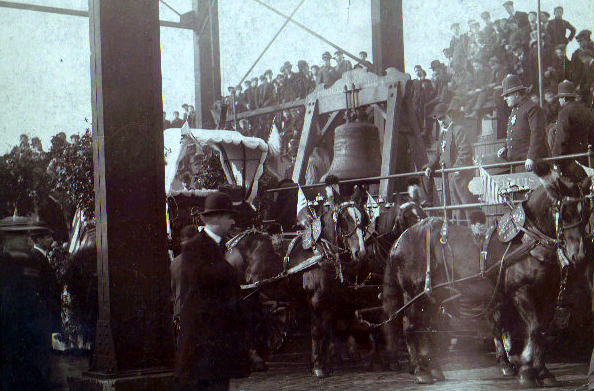 A crowd gathers to see the Liberty Bell as it tours the country during its 1904 trip to St. Louis for the Louisiana Purchase Exposition.

Following the trip to New Orleans, Philadelphians gradually became concerned that further travel could damage the bell, if not cause it to break into pieces. Nevertheless, the Liberty Bell was sent to Chicago for the World's Colombian Exposition in 1893. That kick-started a series of five trips taken over an 11-year period, although city officials denied several other requests for the bell.

But wherever it went, people flocked to see it.

An estimated two million people saw the Liberty Bell during its 1902 trip to Charleston, South Carolina, as it passed through Harrisburg; Roanoke, Virginia; Asheville, North Carolina; and Savannah, Georgia, among other towns, according to the San Francisco Chronicle.

The Liberty Bell nearly didn't make its 1915 excursion to San Francisco. Fearful of its fragility, Philadelphia leaders were reluctant to send the bell, which had not traveled in a decade. But urged by West Coast residents, including children, who wished to see it, they relented.

"They were being cautioned about the movement of this bell," Giannini said. "They said that it's very fragile and it could fall apart. They were pretty right about that. In 1915, a 'spider' was prepared to hold the bell together. That's still with it to this day. If you go look at it now, there are these little hooks that come out on the edge of the lip of the bell. Those hooks are basically what is holding the bell together." 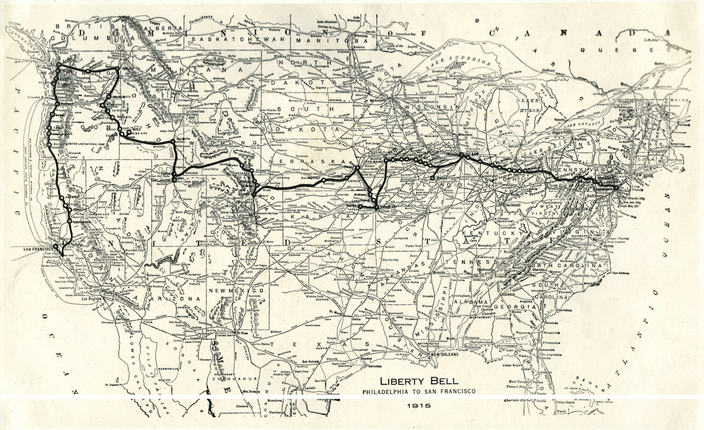 The Liberty Bell traveled to San Francisco in 1915, stopping in various towns and cities as it crossed the United States. The journey marked the last of seven promotional trips the bell made between 1885 and 1915.

The San Francisco Chronicle described that concern in a Sunday Magazine article anticipating the bell's arrival: "Never before has the Liberty Bell been so jealously guarded as now. A whole force of experts and guards is with it, and every effort has been made to insure its safety from further cracking or disintegration."

The 10,000-mile trip to California and back, made by train, sent the Liberty Bell through 30 states, including those in the Pacific Northwest and the Southwest. A photo album chronicling the journey, preserved by the Historical Society of Pennsylvania, depicts crowds of people, many of whom kissed or touched the bell.

"The fact that they were there and they suffered through those crowds, and waited in those long queues to touch it, I think they just felt something," said Vincent Fraley, communications manager at Historical Society of Pennsylvania. "It's a visceral reaction. And that's why (activist) groups picked this symbol."

Abolitionists, suffragettes and gay rights advocates all used the Liberty Bell, in some fashion, to exemplify their causes in the last 180 years. Suffragettes created an exact replica, dubbed the Justice Bell, and refused to ring it until they received the right to vote. Gay rights advocates protested outside Independence Hall on July 4 for five straight years in the 1960s.

"If you think of all the other national relics, the Liberty Bell supersedes all of them — in the imagination and in the reality," Fraley said. "We have a cornucopia of symbols to choose from, but every group has always picked this one. I think it's because of the liberty connotation, through its inscription, which the abolitionists really picked up on. 'Proclaim liberty throughout the land to all inhabitants.' It doesn't say to some inhabitants at some times." 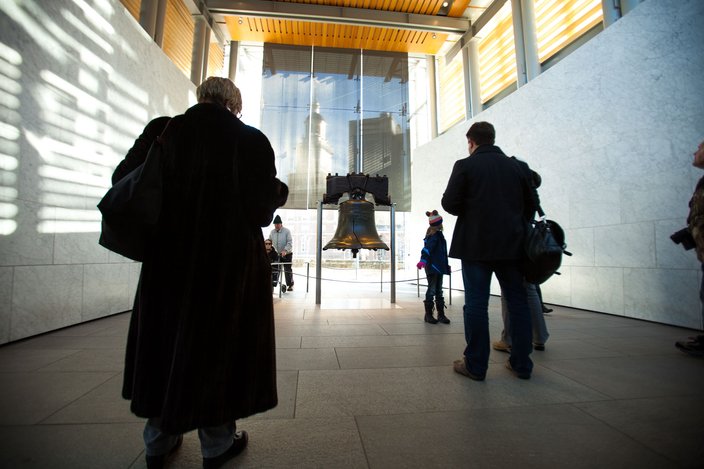 Some 18,000 people visit the Liberty Bell on any given day, according to Independence National Historical Park.

That so many groups have used the Liberty Bell as a symbol in different eras speaks to the bell's power and potency, Fraley said.

It's a power evidenced by the visitors the Liberty Bell continues to attract, year after year. Some 4.3 million people visited Independence National Historical Park last year, making it one of the most visited sights maintained by the National Park System.

More than four decades after he began working at the park, Giannini said he remains surprised at the thousands of people who visit the bell each day. Many of them are from other countries.

"They really come to see that bell and what it stands for," Giannini said. "We're not a perfect country by any stretch of the imagination, but we strive to be that way."