With a show premiering Thursday on CMT, the star talked about viral videos, pets, living in Northeast Philly and more 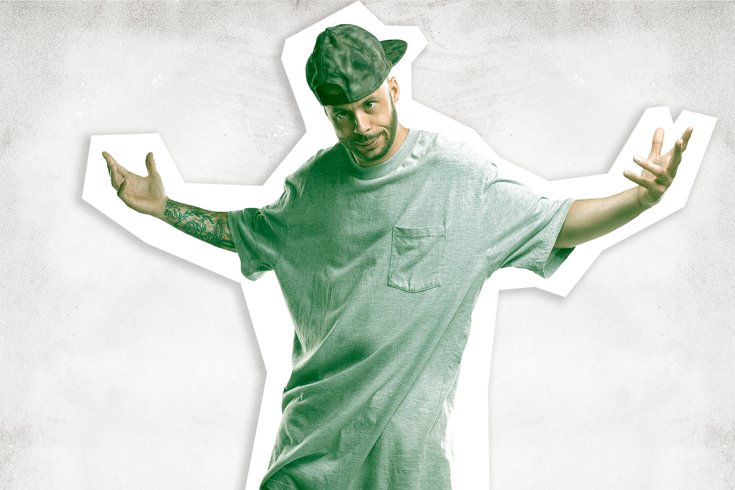 Northeast Philadelphia's Ed Bassmaster is the star of a new show on CMT. It premieres at 10 p.m. on April 14.

On Thursday night, Ed Bassmaster – the renowned YouTube star from Northeast Philadelphia – will take his talents to cable television. Specifically, “The Ed Bassmaster Show” will premiere on CMT (Country Music Television) at 10 p.m.

Well, watch this supertrailer from the show, read Jason Nark’s 2014 profile or check him out on YouTube and Twitter . (Might I recommend the barely-safe-for-work “granny prank”?)

PhillyVoice caught up with Bassmaster for a phone chat late last week in advance of the show’s premiere.

As with many things related to viral pranksters, there was some confusion about whether Bassmaster would conduct the interview as one of his many characters, or as himself.

Many of the questions were crafted with the former in mind; it was briefly awkward.

By the end, we chatted about his roots in the business he found himself in, but we’ll present it as the conversation went down anyway, with hyperlinks indicating why the questions were asked in the first place to avert any confusion.

With no further ado, our Q&A with Ed Bassmaster…

I hate hitchBOT and I’m happy it got destroyed. What do you think about hitchBOT?

A robot that got destroyed in Philly last year. Thought you’d heard about it.

I honestly didn’t hear about that.

I don’t like the people here. They’re very unfriendly. Actually, they’re very nice. I’ve only gotten jumped three times. Northeast Philly is great. It’s where home is. The only problem is our house. We’ve outgrown the space.

Who is your favorite person in Philadelphia?

That’s a good question. I’d have to say Ben Franklin. He’s cute and looks like a teddy bear, kinda. He seems like a nice old man. He had hippie hair before the hippies. Plus, I think he invented electricity or something; never mind. I don’t know about that.

Have you had pets?

Yes. They’re still alive. Two cats and a dog. Robert the cat. Chuck the cat. Richard the dog. He’s a thug, Richard. I’ll tell you what makes him a true thug: He lets Robert push him out of the way and eat his food. Robert is big and fat. He takes Richard’s dinner. We jump in and say, ‘Hey, hey, hey, time out.’ But the dog does nothing but just look at him. That’s why he’s a thug.

Have you ever worked at a drive thru or have any friends who have? (See here, here, here and here for Bassmaster’s drive-thru stylings)

Yes. I’ve been on both ends of the drive-thru – punked and pranked. It’s all in good fun. We’re all out here trying to make a living. With the drive-thru pranks, I throw them a curve ball, but they’re always laughing at the end.

Other than that, I think drive-thrus are convenient.

I hear you have a new show coming out on TV. What can you tell me about it?

It’s going to be 10 episodes, I think. A cast of my characters doing shenanigans publicly. We’re having a good time doing it.

Will there be a Philly tie to it, as in was any of it filmed here?

Well, the star is from Philly. That's the only tie at this point. I hope to film things here in Season Two. A lot of my Philly fans are coming up to me asking, "You guys filmed in Philly, right?" Well, not exactly. It'd be nice to film in the hometown. CMT has been really receptive to everything I've mentioned that goes against the grain. They're pretty cool. I'm enjoying it so far. They haven't p----d me off, and there's a bunch of country folks over there.

How did this all come about?

Tony DiSanto reached out. He's the executive producer. Runs DiGa. He and a partner approached me a few years ago with an idea for a show. Two years later, he hit me up and asked if I wanted to be on a pilot for an Ed Bassmaster show, but a lot of guys on set were late or didn’t show up or purposely did not read the lines.

I said I can do this, and they had faith in me.

Don’t let the network fool you, CMT:. Everybody I tell says, "CMT?" They do a double take. My show can live on any network. We can go worldwide with this s--- now.

What have been your favorite skits in your creative run so far?

Honestly, I don’t know. There's a lot of them, man.

I've been doing this since 2006 and there has been tons of epic reactions and heartfelt reactions.

Did you envision this as your life path?

I did stand-up [comedy] in Philly and did well with it for very short time but I didn’t feel I was where I wanted to be. I always wanted to be on stage, something like "Saturday Night Live." SNL was a dream since I was a kid.

I had a 9-to-5 job when YouTube came out. Same day I found it, I opened an account. I went out and got video camera. I posted something and friends at work, my family, were laughing at it and sharing it with their friends at work. At first, when I got 30 more hits, they were 30 people that I don’t know laughing at what I was doing, which was mind-blowing. Then it went to 100, then 1,000, and I thought, "Wow. This is crazy." I was offered a YouTube partnership by 2008 or 2009 and it just went from there.

What would you like your fans in Philly and beyond to know that I haven't asked about?

What I’d really like get through is that I'm really thankful to my YouTube audience because that’s how I got my start. It’s YouTube that opened up these doors for me.

People say I'm a sellout because I want to do TV and movies? Well, I grew up wanting to be a TV star; I didn’t grow up wanting to be YouTube star. I'm always going to love YouTube. There's nobody telling me what to do with my content. There's freedom there, and I give YouTube so much credit.

On the flip side, kids ask how to make a video go viral. There's no formula. You throw it up there and you never know. Upload something, and it can catch on.

But if you're going into it for the money, well, you might want to find a job. When I started, there was no money, no partnerships. What I want to do was make people laugh, and that was heartfelt.

Thanks for the time, Ed Bassmaster!