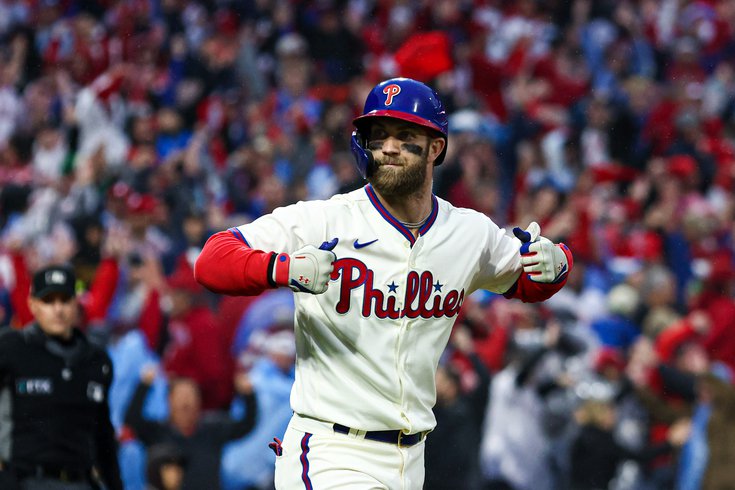 Bryce Harper looks toward the Phillies' dugout and begins celebrating after he hit the go-ahead two-run homer to give the Phillies the lead late in Game 5 of the NLCS against the Padres.

Man, what a year.

From the Phillies' unbelievable run to the World Series to the Eagles' dominance of the NFL, Joel Embiid's continued MVP case, the Union's march to the MLS Cup Final, and the Flyers...well..."building," this has been one of the more successful and by far wildest 12 months in Philly sports in a long time.

So many moments, so many memories, and nowhere near enough days to fully talk about it all.

But we're going to try anyway.

As we approach the new year, the PhillyVoice sports staff will be looking back on the rollercoaster of a year that was amongst the city's major teams, from all the biggest moments and storylines to the major figures that helped make it all happen.

We'll start with a countdown of the year's best plays, and upfront: There were a ton and we know we didn't get to all of them, so feel free to sound off in the comments or on social media with your favorites.

The 2022 Phillies didn't have the best defense, but they sure did get timely plays from guys often criticized for it.

In the case of Nick Castellanos, he made the same sliding catch in right field during three huge moments in the postseason: For the second out in Game 1 of the NLDS, for the final out of the ninth in Game 1 of the World Series to send it to extras, and for the first out of Game 3 at Citizens Bank Park to a roaring crowd of 46,000 strong.

We are going to extras! pic.twitter.com/ZUMzHapDf6

The Phillies were not about to go away.

After falling into a 5-0 hole in Game 1 of the World Series down in Houston, the Phils climbed all the way back to force the Astros into extras. Then in the 10th, J.T. Realmuto gave them their first lead, launching a solo shot opposite field to give the Phillies the deciding run and soon after a 1-0 series lead.

The Fall Classic would return to Philadelphia with at least a series split, and for the juggernaut Astros, a message was sent that this was going to be a fight.

Jean Segura waited a long time to finally experience playoff baseball and on the way to the NL pennant, he had one of the wildest nights a player could maybe ever have during Game 3 of the NLCS.

He gave up the lead, got it back on a pitch no one ever hits, got picked off right after, then – when the line needed to be held – made a diving play to get out of the jam that he met with a flex and a roar alongside 46,000 strong.

"I almost started flexing with him. It was great," Realmuto said afterward.

There are so many great plays to highlight from the Eagles' season so far, but if any really encapsulate what the year was about to become, it's this one during the Monday night massacre of Minnesota back in Week 2.

At the top of the second quarter at the Linc, Quez Watkins burnt past the Vikings' secondary and Jalen Hurts hit him with a perfect pass over top for an easy 53-yard touchdown.

The Eagles went up 14-0, the crowd went wild, and Hurts crossed his arms looking for his respect.

An MVP campaign was born right then and there.

The Raptors were playing the Sixers tough in their first-round playoff series and in an often ugly Game 3 up in Toronto, it took everything star center Joel Embiid had to push his team to a 3-0 series lead, even through an injury that was later revealed to be a ligament tear in his thumb.

Tied 101-101 with just 2.6 seconds left in overtime, Embiid, drawing a double team, took the inbound pass on a catch and turn and sank the three to win it.

Scotiabank Arena went silent and the Sixers celebrated on the brink of advancing to the second round, though they would need three more tries to actually do it and that much more out of Embiid in the process, which went on to cost them against Miami.

If it weren't for upper-deck seats at Petco Park, that ball probably still would've been in orbit. And heck, Bryce Harper might still be trying to comprehend what he saw that night in San Diego.

Kyle Schwarber hit a bunch of homers during the postseason run, but that one off Yu Darvish in Game 1 of the NLCS? He absolutely crushed it, sending it 488 feet into the seats at an exit velocity of 120 miles per hour.

How the cover stayed on the ball is a mystery, but you won't find anyone complaining.

There's just something about that No. 12 Phillies jersey and October home runs in the California night.

One of those moments early in a run where you just know a team's going straight to the end.

In Game 4 of the NLDS in the bottom of the third, Realmuto launched a fly ball to that perfect spot off the wall near the 409' marker in Citizens Bank Park's centerfield. The Braves' Michael Harris couldn't get to it, nor play the bounce, and Realmuto went storming around the bases as 46,000 in the crowd roared.

The Phillies went up 4-1 and went on to put the defending champs away to advance to the NLCS for the first time in 12 years.

This one is in here as a collective because the Eagles have ran it to near-perfect success all season, to the point where they can straight up tell you it's coming and still get the yard or two they need without fail. Hurts and the offensive line are going to get that first or the touchdown, and so far, there's been nothing the rest of the NFL can do about it.

Jason Kelce telling the Dallas D-Line “you know whats coming” before they sneak it lmfaoooo pic.twitter.com/d5fXHFwkKr

It had been weeks since the Phillies had been home and 11 years since Citizens Bank Park had hosted a postseason baseball game. So when Game 3 of the NLDS against the Braves finally arrived, Philadelphia was ready for a party.

One of the longest-tenured Phillies, with a career full of frustration, turned on the first pitch from Atlanta's Spencer Strider and everyone in the building knew it was gone as soon as they heard the crack.

Citizens Bank Park erupted and Hoskins, exhaling years of heartbreak, spiked his bat into the ground as he moved to round the bases.

Red October was back, better than ever.

Or "Bedlam at the Bank," whichever call you prefer. Either way, there was no other choice for No. 1.

On the cusp of the NL Pennant with the Phillies down a run to the Padres in the eighth, Bryce Harper, the club's $330 million man created a moment for the ages with one swing of his bat.

Robert Suárez's pitch sailed into the seats in left-center, the Phillies, who backed into the postseason just a few weeks before, were suddenly three outs away from the World Series, and a rain-soaked Citizens Bank Park – alongside the entire city – went into a frenzy.

"I told [hitting coach Kevin Long] before I walked up the steps 'Let's give them something to remember," Harper said after the clinching Game 5.

Harper and the 2022 Phillies etched themselves a permanent spot in Philadelphia's lore, one that we'll be talking about for the rest of our lives.

What a moment. What a team. What a run.