Bryce Harper and the Phillies: How it started vs. how it's going 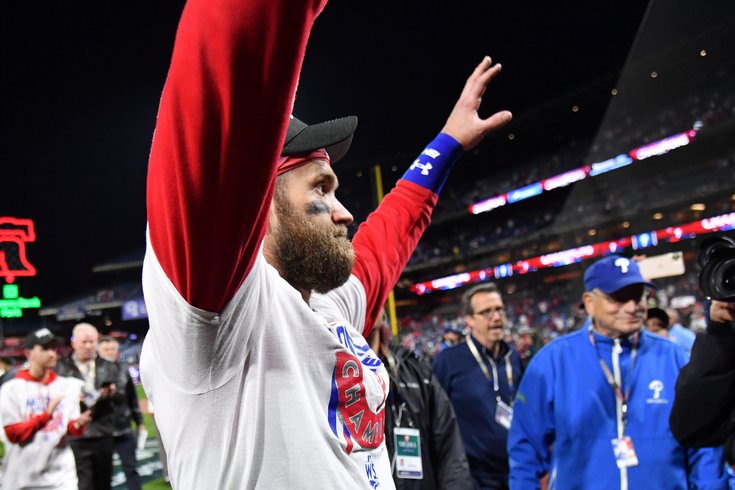 Bryce Harper raises his arms in victory during the celebration after the Phillies won the NL pennant.

Few on the roster knew what these celebrations were like. None of them knew what they would be in Philadelphia.

But they know now. Everyone does.

On an almost poetically rainy day at Citizens Bank Park, the Phillies stood atop a makeshift stage in the middle of the field with the crowd and the city out in the streets at the loudest they've ever been.

The moment Bryce Harper signed up for more than three years prior had finally arrived, and he and the Philadelphia Phillies rose to the occasion.

After near limping into the postseason, the Phillies turned devil magic back against the St. Louis Cardinals and the farewell tour for Yadier Molina and Albert Pujols. They demolished the defending champion and division rival Atlanta Braves, then silenced the San Diego Padres, on a miracle run of their own, with some of the single biggest moments in franchise history.

It's been a long season, and now only the Houston Astros stand in their way from that coveted piece of metal and a parade down Broad Street.

But the actual road has been even longer.

This is how it's going: Harper and the Phillies, with all the momentum in the world right now, are National League Champions on the doorstep of becoming World Champions.

The sun shined down upon Clearwater, Florida. The Phillies had their guy.

After months of rumors and speculation, John Middleton and the old front office regime of Andy MacPhail and Matt Klentak pulled off the biggest free agent signing in franchise history.

In front of his family and an entire section of media at what used to be called Spectrum Field, Bryce Harper made a 13-year, $330 million contract official, putting on his No. 3 Phillies jersey and hat for the very first time.

In a rebuild and a postseason drought going on eight years, one of the biggest stars in baseball chose Philadelphia. Not the pride and prestige of the Yankees in the Bronx, not the glitz and glam of the Dodgers out West. Harper, a baseball prodigy turned superstar and former MVP with the Washington Nationals, chose the Phillies and everything they could be if they reached the summit again.

It was huge. This was the move, this was the guy, that was going to get the Phillies back to the playoffs.

Jayson Werth would tell him stories about those Red October glory days when they were both in Washington. The parade, the red Hulk Hand, the sellout crowds, the rally towels. Harper wanted in. He wanted to bring that all back.

But in his excitement, he slipped. "We want to bring a title back to D.C.," he said, and the baseball world wasn't about to let that one go.

A few weeks later, one of the most anticipated seasons in years, with a second-year, forward-thinking manager in Gabe Kapler and a reworked roster highlighted by Segura, Realmuto and Harper, finally began. The Phillies swept the Braves. Citizens Bank Park went nuts.

This was it. This was the year the drought ends.

Harper was good, and for a while, so were the Phillies. But then they stalled out. The drought continued.

But it was going to take more time, more than anyone was ever expecting. Way more work too.

The Nationals, meanwhile, won the World Series and narratives, however irrational they were, began setting in. 'They didn't need Harper,' 'They were better off without him,' 'You couldn't win with him,' and so on.

Washington quickly imploded after that run, but the Phillies failed to move forward. Those talking points stuck. Kapler was fired and in came Joe Girardi, but in a heavily COVID-altered 60-game season, Harper and the 2020 Phillies couldn't out-slug sloppy fielding and a historically bad bullpen.

Klentak was demoted, MacPhail eventually left, and Dave Dombrowski took over as the President of Baseball Operations after the Red Sox fired him not even a full year removed from their 2018 title.

It was more of the same in 2021. Despite a campaign that saw Harper win his second career NL MVP award, the Phillies still couldn't get over the hump. There were flashes of brilliance, but they stalled out again. The playoff drought hit 10 years running. 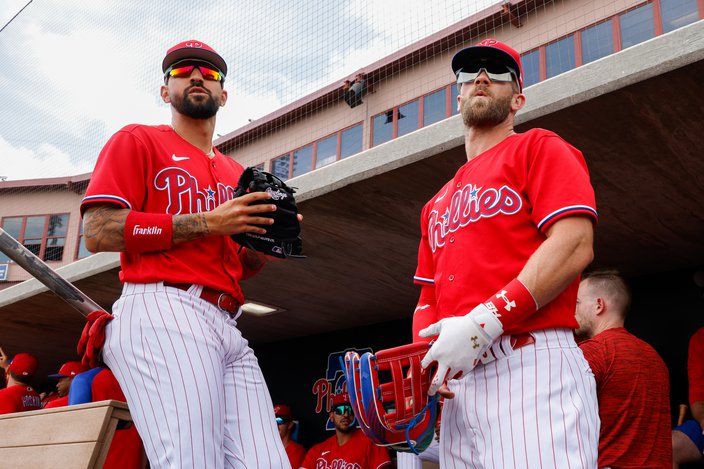 Nick Castellanos and Bryce Harper back at spring training.

There was always something different about 2022 though, and it wasn't just the expanded playoffs and the universal DH (though those are two big reasons why the Phillies are here right now). Once the lockout ended and the accelerated free agency period opened, Dombrowski's decisions, with the OK from Middleton and constant insistence from Harper made the message perfectly clear: It's October or bust.

The Phillies, for the first time in their history, exceeded the luxury tax threshold. They spent $179 million combined on Kyle Schwarber and Nick Castellanos, two of the biggest sluggers on the market, to complete a lineup designed to thump the team all the way to the end.

Schwarber had already been there with the Cubs in 2016 and after revitalizing his career during his stint with Nationals under hitting coach Kevin Long, who the Phillies quickly hired last October, he wanted to reach the top again.

Castellanos, after years of futility with the Tigers and a short stint with the Reds, just wanted a shot beyond the first round.

"I've played over a thousand big league games and have zero playoffs wins," he said all the way back in March. "So cool. I've made money, I've hit homers, I've played on TV. But I haven't won no games that matter."

That all seems like a lifetime ago now. So did the Phillies' futility out of the gate until they finally made the call to fire Joe Girardi and promote now-permanent manager Rob Thomson. So did having to tolerate Odúbel Herrera's and Jeurys Familia's spots on the roster, having to go without Segura, Harper, and Castellanos for extended stretches, Alec Bohm's redemption (he's still all right), the division-leading Mets always having their number, and that one last ugly, often infuriating wild card race with the Brewers.

Leave it to baseball to make a few months seem like an eternity, but all the questions, all the doubts went far in the rearview once that final out was recorded down in Houston on October 3. The drought was over and though few could initially see it, a new confidence was born. The Phillies were going to the playoffs. All bets were off. 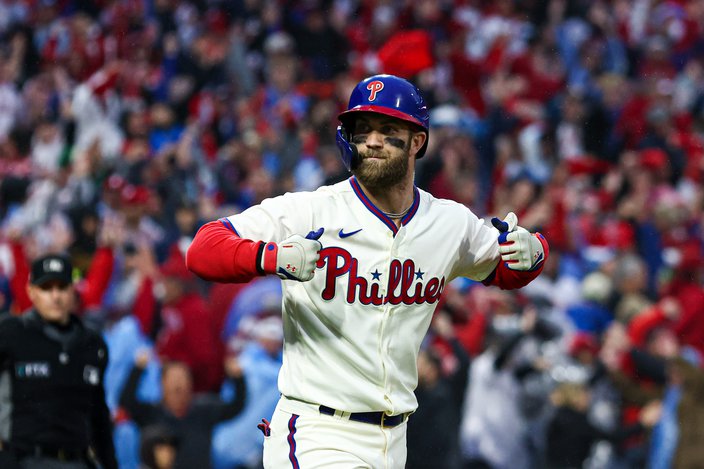 Bryce Harper looks toward the Phillies' dugout and begins celebrating after he hit the go-ahead two-run homer to give the Phillies the lead late in Game 5 of the NLCS against the Padres.

The moment had finally arrived, but that moment doesn't happen unless a million other things go right.

It doesn't happen without Aaron Nola pitching lights out in the two biggest starts of his life. It doesn't happen without a miraculous six-run ninth in St. Louis, without each of Rhys Hoskins' homers and every cathartic spike and bat flip that followed, without every Schwarber bomb, without the daycare growing up right in front of us, without Jean Segura's relentless determination and unreal plate coverage, without Realmuto rounding the bases as fast as he can, and so many more.

With the Phillies one win away from the World Series in Game 5 of the NLCS, Harper emerged from the dugout to catch the first pitch from the guy who helped sell him on Philadelphia years before. The red Hulk Hand, the rally towels, the sellout crowds, they were all brought back.

With the Phillies down a run in the eighth, Harper stepped into the batter's box with one on. Facing Robert Suarez, he saw seven pitches, battling and adjusting with each one as everyone watching held their breath.

"I told [Kevin Long] before I walked up the steps 'Let's give them something to remember," Harper said afterward.

The seventh pitch crossed the plate. He turned on it. The ball sailed over the fence in left-center. The crowd erupted, the Phillies had a lead and in an instant were three outs away from the World Series.

Joe Davis yelled that it was "The swing of his life!" on the FOX broadcast, Scott Franzke exclaimed "Bedlam at the Bank!" on the radio. Citizens Bank Park could be heard from miles away.

The moment had arrived, Bryce Harper and the Phillies – after years of heartbreak, of repeatedly falling short – rose to the occasion.

The red Hulk Hand, the rally towels, the sellout crowds were all back, better than ever even. The only thing missing was the parade.

So as Harper and the Phillies stood on the stage after the final three outs of Game 5 were recorded, the new message was delivered.