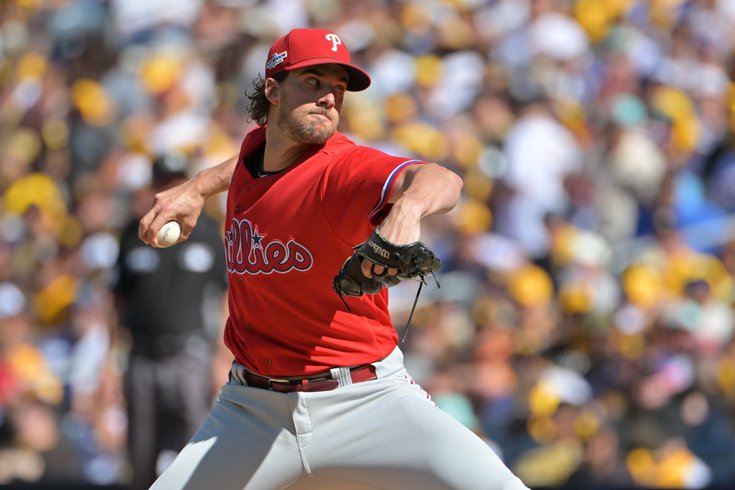 Phillies starter Aaron Nola delivers during Game 2 of the NLCS against the Padres last week in San Diego.

The longest-tenured Phillie is getting the nod for Game 1.

Nola is 2-1 with a 3.12 ERA and a 1.10 WHIP in his first ever postseason. He hit a rough patch in his last start out in San Diego, where he got tagged for two homers and six earned runs in Game 2 of the NLCS, but has otherwise been lights out against the Cardinals in the Wild Card round and then the Braves in the NLDS.

When the Phillies last saw Houston at the end of the regular season, with the magic number for the last NL Wild Card spot whittled down to just 1, Nola got the start for the October 3 series opener and pitched the game of his life.

The 29-year-old righthander pitched 6.2 innings of shutout ball, striking out nine and flirting with perfection to help secure a 3-0 win and the Phillies' first playoff appearance since 2011.

The miracle run took off from there.

Wheeler is 1-1 with a 1.78 ERA and a minuscule 0.51 WHIP in October, coming off an NLCS where he shutout the Padres for seven innings in Game 1 then, fighting for grip through the rain, held them to just two runs through six in the pennant-clinching Game 5.

Since the Phillies clinched on Sunday, Wheeler would've been ready in time to start Game 1, but Thomson chose to go for the extra day's rest as he would've had his two best starters still available at the top either way.

"I think the numbers speak to the fact that both him and Nola on an extra day's rest, their numbers are a lot better," Thomson said. "Any time we can give those guys an extra day, we'd do it."

The timing also makes it so that Nola and Wheeler will get another turn if needed should the series go the full seven games.

"It's just happened to work out where we've been able to have some time off or have enough time between their starts that they can go 1 and 2 in each series," Thomson said. "It's worked out and for us. It's a huge advantage because now in a seven-game series you get them twice. So in a potential seven games you have your two best guys, it's a big advantage."

The rotation through the postseason so far has been Wheeler, Nola, Ranger Suárez, and then a bullpen start, but Thomson didn't want to commit to anything beyond Game 2 other than that the Phillies would be sticking to the four-man rotation setup that has gotten them here.

First pitch for Game 1 in Houston Friday night is set for 8:03 p.m.