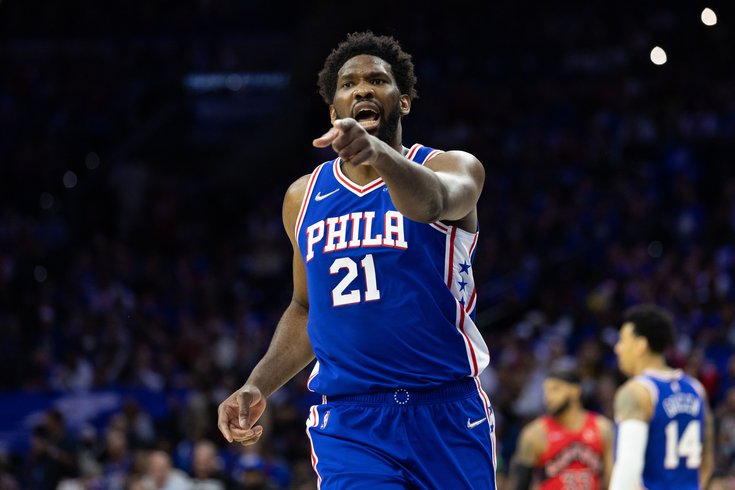 Sixers center Joel Embiid has a torn ligament in his thumb, an MRI confirmed on Sunday, matching fears already held internally by the front office. Head coach Doc Rivers would not outright name the diagnosis at the team's practice facility in Camden, but he said that their initial suspicions were right.

"It just confirmed what we thought," Rivers said Sunday. "There literally will be no change. We thought what it was, and it was. So you just keep moving on."

The good news, if we try to spin it as if there is some, is that Philadelphia had already been acting as if this was the case, and Embiid's determination to play through the issue is unchanged based on receiving an official diagnosis. Embiid will continue to have the area wrapped with tape in order to play in games, and will continue to work with the Sixers' medical staff to manage the issue through the rest of the postseason. ESPN's Adrian Wojnarowski reported Sunday afternoon that surgery will be necessary to deal with the injury down the road, but that will wait until Philadelphia's season has concluded.

With Embiid in a compromised state, the fear will be that the end comes sooner for this group than desired or anticipated. Embiid and the Sixers played a stinker on Saturday afternoon in Toronto, creating just a bit of doubt that they're going to close a pesky Raptors team out, but they should ultimately still be able to get past their opponent to the north without a top-shelf performance from Embiid. The series moving back to Philadelphia for Game 5 puts them in a friendly gym where they won decisively in each of the first two games.

It should be noted, though, that the repercussions of the injury showed up in Game 4 on Saturday. Embiid noted that shooting the ball was not much of an issue for him, but other important areas of the game were a struggle.

"It was more when it comes to rebounding, at the free-throw line, and also passing," Embiid said. "I don't know how to explain, but it's whatever. The biggest story is we lost the game, we weren't able to close it out, and we got to do a better job."

"I wish it would have happened on my other hand and not my shooting hand, but I'm going to adjust. I guess that means I'm going to have to use my left hand even more than I'm used to. I'm going to adjust, and I thought tonight I was fine shooting the ball. They just were really aggressive about every single time I touched the ball, really everywhere on the court, they just doubled and tripled me. They tried to get the ball out of my hands, so I got to make adjustments, be more physical, and get deeper touches."

Passing issues looked like more of a floor-reading/decision-making problem for Embiid on Saturday, but rebounding was a constant issue for the Sixers, and Embiid's activity there left a lot to be desired.

If pulling down boards in traffic is a big enough pain source to stop him from pursuing them at all, Embiid is going to have to chip in there some way and somehow. Taking a more active approach to sealing off the Raptors would be one method, but that doesn't take his thumb out of the danger zone even if he could trust his teammates to complete the rebounding chance.

Another potential point of concern — will the thumb impact the sort of plays the Sixers can run and have success with? The James Harden/Joel Embiid pick-and-roll has been a gold mine for Philadelphia since the former arrived, and asking Embiid to catch passes with some zip in traffic might end up being a bigger ask than you'd think. Should that be the case, it puts limitations on what Philadelphia can run and when.

Naturally, Harden's importance in this series and the rest of the run only grows as a result of the Embiid injury, his offensive talents needed more than ever before. While Harden's playmaking has continued to be a driver of success for Philly, his scoring efficiency still isn't there, though Doc Rivers said Sunday he liked some of what he saw from Harden on their road trip to Toronto.

"The last two games I've actually thought he's had great explosion. He's beating people off the dribble, it's when he gets in there is where he's not making the shot," Rivers said. "I feel comfortable. He missed two of his main floaters down the stretch, which he doesn't miss that shot, and there was no one around. He just missed the shot. I'm fine with him taking those."

"I still want him to take the open three. He's had a couple of those, he had one in the first half where he was wide open, he put it down and he took a two. I jokingly said, Daryl in Houston would have come down and yelled at you, oh I said he wouldn't have yelled at you he would have yelled at Mike [D'Antoni]...I don't think he's had a lot of those in his career, but he's getting them now, those are the ones he still has to get comfortable with."

On Toronto's end of things, guard Fred Van Vleet picked up another knock of his own in Game 4, exiting with a hip issue that Toronto is calling a hip flexor strain for the time being. He's questionable heading into Monday's pivotal Game 5, and if Van Vleet can't go, the Raptors will presumably lean into the longer, more athletic lineup that featured in their win on Saturday.

For the Sixers, that doesn't appear to change much of anything. Their focus remains on what they can control internally, setting aside the thumb issue, the Raptors wills and will nots, and even the officials who have been a constant source of scrutiny in this series. They know what they're getting from this opponent by now, and all that's left is to execute.

"The way they play, you know it. You know what they're doing, and they do it honestly because they can," Rivers said. "They're doing what they should do, and we've got to do what we need to do to counteract that. We've done that until the other night."