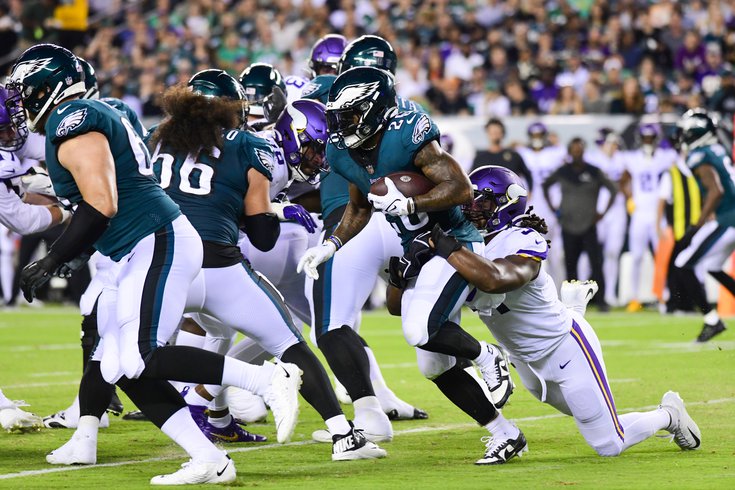 The Eagles run game remains a force to be reckoned with.

The Eagles stomped the Vikings in primetime on Monday Night Football, riding dominant performances from Jalen Hurts and Darius Slay to a 24-7 win.

• If Jalen Hurts was putting together halves like the first half of this game on a regular basis, we wouldn't just be anointing him the long-term QB of the Eagles, we'd be putting him in conversations for awards like NFL MVP. We're a long way from that point yet, but within the details of this game are signs of real progress, reasons to believe that this guy might just establish himself as the answer.

Right at the top of the list — Hurts' willingness and ability to attack the middle of the field. It's something that has been discussed a great deal with Hurts dating back to his days as an amateur prospect, and he showed absolutely no fear going at the Vikings in the heart of their defense. Better yet, Hurts was in sync with all of his weapons as they broke out of routes of all sorts, hitting short timing routes and soft spots in zone coverage depending on what the moment called for.

Improvement has sort of been taken as a given with Hurts, but it doesn't make it any less exciting when these new things pop up in his game. Given the base of athletic talent that's there and the leadership qualities he seems to have, consistent, steady progress from Hurts would be enough to send most of this fanbase into hysterics. So much of the offseason was spent marveling at the upgrades they'd made and speculating on whether Hurts would be able to capitalize on the talent surrounding him. He has managed that and then some, with the Eagles looking like one of the best offenses in the league even with a shaky performance from the offensive line in Week 1.

Consistency, of course, is the thing separating the mere mortals (the QBs in Hurts' general tier) from the guys who consistently march teams on deep playoff runs year after year. But through the first two weeks, Hurts has been one of Philadelphia's best performers period, and he has done it in different ways depending on what the moment called for. He's off to a heck of a start.

(Something you also love to see is the everybody eats approach the Eagles took through the air on Monday. All four of DeVonta Smith, Dallas Goedert, Quez Watkins, and AJ Brown put up at least 69 yards, making it hard for the Vikings to key in on any individual threat as the Eagles marched toward inevitable victory. The more unpredictable you can be throwing the football, the harder it is for teams to disrupt your approach and sit on your throws. There's plenty of room for all this talent to shine on offense.)

• How about a bit of credit for the coaching staff for their preparation of this team heading into a marquee matchup? Though we can rightfully crown Hurts for one of the best performances of his young pro career, it felt like he constantly had guys open and in positions to run with the ball in their hands all night. The Vikings didn't do much adjusting throughout the night as the Eagles tore up their zone, but you don't take credit away from Philly for continuing to hit the opponent in every soft spot they exposed.

The week of preparation seemed to go beyond whatever they were talking about and drawing up pre-snap. There were moments when guys like Smith and Hurts lined up and then looked at one another after seeing what the defense was showing, signaling adjustments based on what the Vikings were showing them. This looked like a group that had a great understanding of who and what they were dealing with, and beyond that, they did an excellent job of capitalizing on that knowledge. When knowledge meets execution, you have the recipe for a rout.

• Some more credit on the offensive side of the ball goes to the boys in the trenches, and I thought this was a night-and-day difference from their effort against the Lions. Hurts made some tremendous plays on the move as he tends to do every week, but the time he had in the pocket on Monday night was striking. When Hurts needed time to drop back and uncork a deep throw, they offered it. When it was just a quick drop, they were overqualified for the job. The big boys pulled out and got to the outside when it was needed, but this was not a night where they needed to dominate through Hurts' leg talent.

• On the rare occasions where the Eagles have managed to put pressure on quarterbacks so far this season, it has felt like they've pretty much always gotten a pass breakup, interception opportunity, or an outright takeaway on those plays. Case in point: with pressure coming toward Kirk Cousins early in the third quarter, Darius Slay lived up to his Big Play nickname and ended a Vikings scoring threat right before they could reach the endzone.

As a nice cherry on top, Slay took his newfound turnover and sought out a famous fan in the crowd, gifting the football to fellow Philadelphia star James Harden. Love me a good crossover episode.

The secondary was not done with their playmaking in a tough spot. After a blocked kick from the Vikings brought Minnesota into Eagles territory, Avonte Maddox made a terrific play to pick Kirk Cousins off for a second time, keeping the dream of another 38-7 victory over Minny alive:

The Eagles have not looked especially good on defense when they've rushed four and effectively given quarterbacks all day to throw, but I think there should be some excitement over what we're seeing from the guys on the back end so far this year. If they're not breaking up passes before they reach their target, they've frequently been step-for-step with their man and ready to bring down the recipient moments after the catch. For my money, tackling has been improved to start the year, and that has allowed the Eagles to minimize big plays and damage before they can happen.

For all the grief all of us (myself included!) have given Jonathan Gannon, this was a big-time performance against a team that was built to stress test them. Kudos all around.

• Justin Jefferson wasn't skunked in this game, but major kudos to Slay for the work he did against Minnesota's top threat in this one, because Jefferson looked a lot closer to an ordinary wideout than a bonafide star. Slay didn't shadow Jefferson the entire night — we wouldn't have ended up with Hasson Reddick on Jefferson in coverage otherwise — but he got a ton of reps against the No. 1 guy for the Vikings. Philadelphia's top corner didn't just come out of that matchup looking good, he outright won the battle, turning in a performance that was only equaled by teammate Hurts.

Slay came away with the interception you saw above, and right when it looked like Minnesota might steal some momentum midway through the fourth, Slay rose to the occasion again, picking off Cousins one play after an interception opportunity fell through his hands.

.@bigplay24slay with his 2nd interception 🗣

He was omnipresent against the Vikings, and it is not an exaggeration to say he put himself in a position for five different interception opportunities, ultimately coming down with two of them. Saying Slay was locked the hell in is underselling just how good he was. It didn't feel like Kirk Cousins could throw his way without risking an Eagles takeaway, and he has been the face of Philadelphia's improved secondary play through two weeks of action. They have been on time and ready to strike.

(With Slay mostly shutting down Jefferson, this could have become an Adam Thielen showcase game, but James Bradberry and the rest of the game made sure to hold up their end of the bargain. Slay starred, but it doesn't take away from the work that got done elsewhere.)

• With the Vikings forced to drop back and throw for the majority of the second half, the pass rush finally began to show signs of life as the game wore on, and thousands of sighs of relief must have gone up around the city. Fletcher Cox is pretty far removed from his best days in midnight green, but a fourth-quarter sack looked and felt good all the same.

Does that mean Jonathan Gannon should rush four as much as he does? Maybe not. But since he's the guy who was the mastermind behind a dominant effort, I suppose he gets at least the next week to say and do as he pleases with regards to the defense.

• 2-0 heading into a meeting with former quarterback Carson Wentz is a beautiful position for this team to be in. Beat up on Washington next week and the hype train is going to go off of the rails. It may before the game even happens, frankly.

• Hasson Reddick on Justin Jefferson in the slot almost made my gouge my eyes out. Never again.

• Kenneth Gainwell owns full responsibility of Hurts' lone interception of the night. Right off of his hands and into the mitts of Jordan Hicks.

(Okay, maybe you could argue Hurts should have thrown it into the dirt/away in general, but I think the play call is more egregious than anything the QB did.)