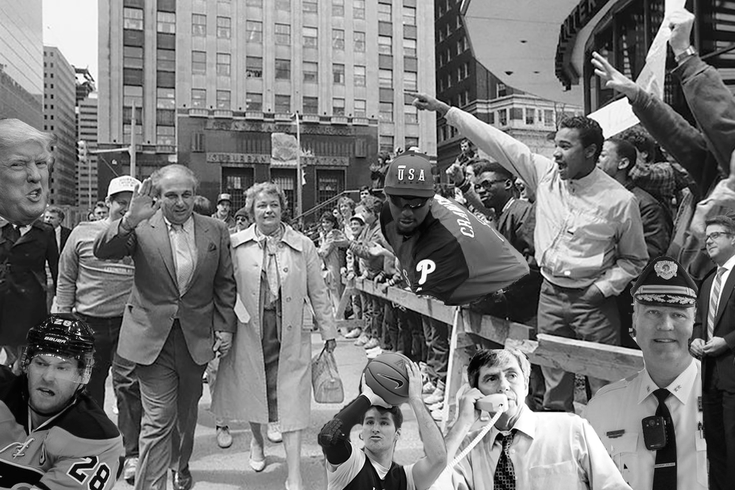 Answers to this week's PhillyVoice Quotes Quiz can be found in this photoshopped image.

The answers are tucked at the bottom of each post (with the context available via hyperlink). We will know – and tell everybody – if you scrolled down and illicitly claimed you went 15 for 15. Real talk.  (Oh yeah, sorry for the lack of a quiz last Friday. I was out of town.)

3. “I hope they win and get a big, expensive parade. In no other big city would there be morons writing screeds such as this. I'd wager [Brian] Hickey never writes an article opposing a social spending program because the costs are too high and taxes already too intrusive.”

4. "I don't know who created those bruises."

5. “As I recall there was also a teenage curfew law at the time so three of us would have been violating that law.”

6. "The 15th police district is in extremely poor condition."

7. "This label change underscores just how medically unnecessary and politically motivated restrictions on medication abortion in states like Texas and Oklahoma truly are."

8. "As a leader, it is only about having the people’s 6, and because I have theirs, they will have mine."

9. “I would love to get help for them before they become chalk outlines on some Philadelphia street."

11. “We're not just giving a kid a toy at Christmas without batteries."

12. “I wanted to give him some advice beforehand just so he knows what the deal is when he gets here.”

14. "The whole experience taught me that I can overcome anything because it tested me more than I ever have been in my life."

15. "Classic rock and country music really rally people around the American flag and get them to have that very 'USA! USA!' feeling."