Photo exhibit of razed Philly buildings is a call to action, artist says 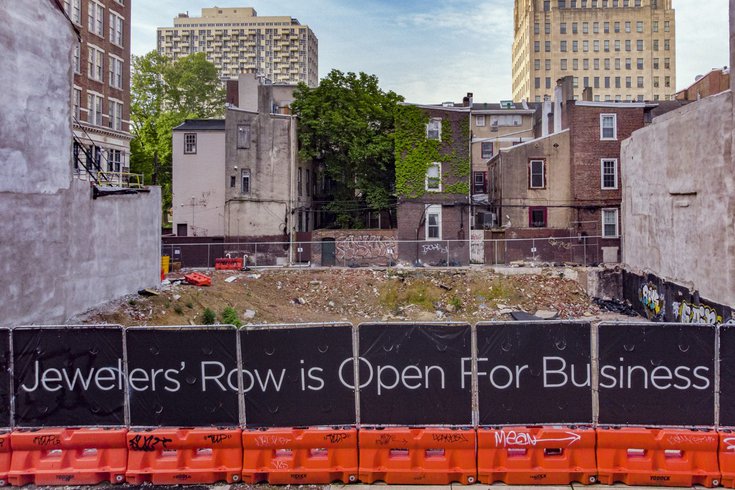 Philadelphia photographer Bradley Maule curated a collection of photos that show the effect of demolition on the city. Five buildings in Jeweler's Row were recently demolished to make way for a Toll Brothers Tower.

Photographer Bradley Maule has put together a collection of images he describes as part photography exhibit and part call to action.

The exhibit, titled "STOP DEMOLISHING PHILLY," features buildings in the city that have been torn down, which Maule hopes will draw attention what he calls Philadelphia's "demolition crisis."

"People should care because the look of the city is changing," Maule said. "Philadelphia is growing, and we want that, but I don't want it to grow at the expense of what makes it interesting."

RELATED: Enjoy a happy hour with goats at The Farm at Awbury | Dunkin' offering free coffee to its rewards members this Eagles season | B. PHL Innovation Fest returns with virtual and in-person tickets

"STOP DEMOLISHING PHILLY" will be on display at the old Security Elevator Co. building at 1640 Fairmount Ave., beginning Friday, Sept. 10 until Saturday, Oct. 2. Between those dates, the exhibit is open Thursdays and Fridays from 6-9 p.m. and Saturdays from 10 a.m.-2 p.m.

Maule shot the 19 photos featured in the collection during the past six years, he said.

The artist has lived in Philadelphia since 2000 and focuses his photography on architecture and landscape. He said he has watched the city evolve and historic buildings be leveled to make room for new developments.

One of the featured photos in his exhibit shows the demolition of five buildings on Jewelers Row in Old City; they were razed to make way for a Toll Brothers tower on the 700 block of Sansom Street.

"If you look at Jewelers' Row, the scale of it is all in the three- to maybe five-story range. You have that brick streetscape and the shops and the apartments upstairs. It's very classic Philadelphia," Maule said. "And so for these five buildings in the block to be torn down to make room for a 24-story glass skyscraper – you gotta be kidding me!"

Maule hopes his gallery raises awareness about Philadelphia's demolition crisis, and visitors get inspired to fight back against it.

He partnered with Repoint Philadelphia – a nonprofit organization that is an advocate for historic-preservation policies. They have created a flyer that will be distributed to attendees that lists action items to promote preservation of buildings, like demolition review, flexible historic districts and tax abatement reform.

Demolition review, for example, would trigger a delay in the issuing of demolition permits so that the historical commission could review the buildings individually.

In Philadelphia, if a building is on the city's Register of Historic Places, owners need approval from the Philadelphia Historic Commission to make changes to it. Currently, there are thousands of properties listed on the historic register.

"In a perfect world, Jim Kenney would give an executive order that puts a moratorium on demolition permits from now until the end of the year," Maule said. "I don't ever see that happening, but that would be the ideal scenario."

Maule is hosting an opening reception to kick off the photography exhibit Sept. 10