People are calling for the sign to be removed, but it's owned by a private citizen who doesn't think it's racist 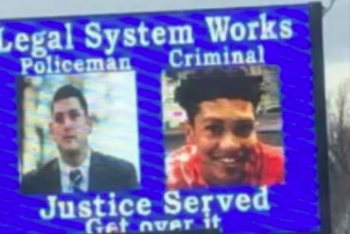 A billboard displaying a racial slur and controversial images of Antwon Rose is receiving a lot of backlash.

A billboard displaying some controversial imagery of Antwon Rose is getting a lot of attention on social media this week amid protests and riots in the wake of the acquittal of the police officer who fatally shot the young black man.

The billboard reads, "Legal System Works, Justice Served, Get over it," along with photos of Rose and former East Pittsburgh police officer Michael Rosfeld. Above Rose's photo is the word "criminal" and above Rosfeld is the word "policeman."

The other side of the electronic board contains a racial slur, reading "Question: Why can Blacks say n**** but Whites can't?"

Unsurprisingly, the billboard has caused a lot of backlash in Pennsylvania and beyond. The board's electricity was even tampered with on Monday night amid calls for the owner to take it down.

The sign — owned by local businessman John Placek, according to WTAE — has been leased for two years from the local fire department in Worthington, Armstrong County. The images of Rose and Rosfeld reportedly are just one of many racist slides the electronic board plays.

Pennsylvania Rep. Jeff Pyle has even commented on it, saying his office has gotten a lot of calls asking for it to be removed.

"Actually, you'd kind of be preaching to the choir," Pyle said in a video posted to YouTube on Monday. "I've seen the gentlemen's billboards before and most definitely do not approve."

Since it's privately owned, Pyle basically said it's out of his hands.

According to what Pyle says in the video, Placek has threatened to sue the fire department if they break the lease. Pyle also said that PennDOT cannot do anything about the signage, as it's removed from the roadway.

In an interview with WTAE, Placek said he does not think the language is racist. His reasoning for it is that "We got to get people talking about (race). We gotta get them excited. And that's what I've done," he said.

"We need to get over the part, I'm black, you're white, you're hispanic. Who cares? I don't care about that. I do care how you act, I do care how you stand for my flag, our flag. ... The board was never meant to hurt anybody. I would never do that. I'm a patriot, I'm an American."

The social media backlash over the language and message has been explosive.

What the hell is going on in Pennsylvania!!!!???? How is this sign even allowed??? pic.twitter.com/a3InZfiDP4

Wow this guy sounds exactly like trump ... there’s clearly no doubt who he voted for

In case anyone had any doubts about how racist Pennsylvania is: Armstrong County billboard featuring Antwon Rose, Michael Rosfeld sparks controversy on social media #justiceforantwonrose https://t.co/feg5Zbfofi

Disgusting. You can see his true feelings when he says, "how YOU stand for MY flag." He catches himself, but it's there. Racist to the core. He's trying to spark something, but it's not conversation.