The burglary occurred Sunday around 7:30 p.m. on the school's campus in Montgomery County, the Lower Merion Police Department announced. 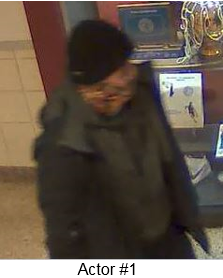 Lower Merion Police/
Authorities said two suspects gained access to the building by forcibly opening an exterior entrance. The duo disabled the lock and removed the glass from a display case that school officials have dubbed the "Kobe Showcase." The exhibit contained several items of "sentimental importance" celebrating the school's former basketball star who skipped college to go directly to the NBA.

School principal Sean Hughes and athletic director Don Walsh said the stolen items included a framed replica of Bryant's high school jersey, the 1996 PIAA Boys Basketball State Championship trophy, the net from that championship game, programs from state and district title games, a proclamation from the Pennsylvania House honoring the team and several pairs of Nike sneakers that had been autographed by Bryant.

Lower Merion Police/
"Material items can be replaced, and we will make every effort to restore and even enhance the contents of the case with the help of alumni and friends," Hughes and Walsh wrote. "And even if we cannot replace all the items, the moments that produced them are still very much alive in our memories and honored through the ongoing traditions of Aces Nation."

Police said both suspects wore gloves and concealed their faces during the robbery.