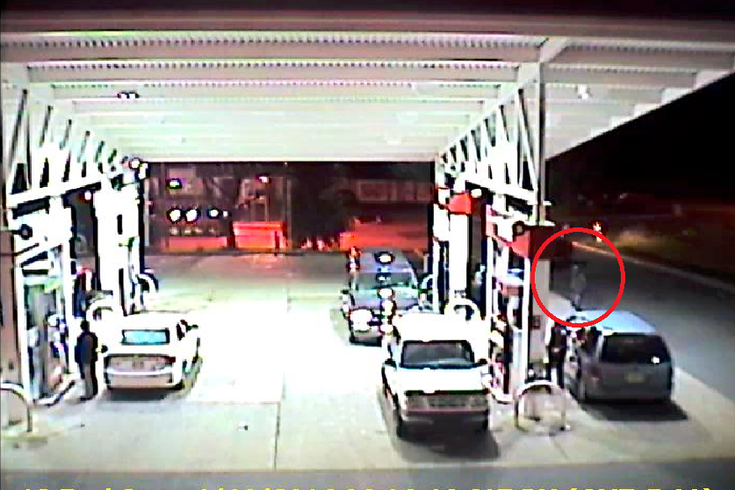 Surveillance footage shows the suspect, circled in red, wanted by Bensalem Police for attempting a carjacking at a Wawa gas station.

Police are looking for a man they say committed one crime and unsuccessfully attempted another at a Bensalem Wawa.

According to authorities, the most recent incident happened on Sunday when the suspect went up to a female victim seated in her car while filling it with gas at the Wawa located at 2250 Lincoln Highway.

The man allegedly grabbed the woman's car door and kept it open despite her attempts to close it, putting his hand over her mouth and telling her to "keep quiet" as he tried forcing her out of the driver's seat.

The victim fought back, police say, and blasted her car horn. Those nearby came to help while the suspect fled into the nearby Neshaminy Interplex.

This isn't the first time the man has struck at the Wawa location, according to authorities. Around 2 a.m. on Dec. 30, he allegedly used a knife to threaten a man at the gas station, making him drive around to various ATMs and take out undisclosed amounts of cash.

Here's how police describe the suspect: a black male in his 20s, standing 5’-9” to 6’-0” tall, wearing dark pants, a dark hooded sweatshirt, a knit cap and gloves.

Anyone with information on the suspect is asked to call Bensalem Police at 215-633-3719.