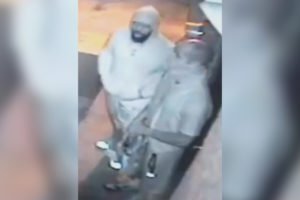 Philadelphia police are seeking help from the public to identify these two men for their suspected involvement in 11 home invasion robberies.

City police are seeking help from the public in identifying two men sought for their suspected involvement in 11 home invasions targeting Asian businesspeople in Northwest and Southwest Philadelphia.

From May 3 to Aug. 1, the suspects broke into homes attached to businesses that had closed for the night, police said. In many cases, victims were tied up and threatened at gunpoint.

Police said the men have stolen money, cigarettes, jewelry and electronics during the home invasion robberies.

Video taken from several of the robberies can be seen here:

According to police, incidents were reported:

According to police, the suspects in all of the incidents were described as two black males. One of the men, police said, has a thin build and a bald or short-shaved head with a short beard and two tattoos of bold text on the inside and outside of his right forearm. The second wanted man, police said, has a heavy build and facial hair, as well as numerous tattoos on both arms as well as his neck.
Police are asking anyone who may have information to contact 911 immediately. If you'd like to submit a tip anonymously, you can contact police at (215) 686-8477 or text a tip to 773847.
Also, tips can be sent anonymously to police here.