Is Pope Francis the next great Argentinian basketball star? 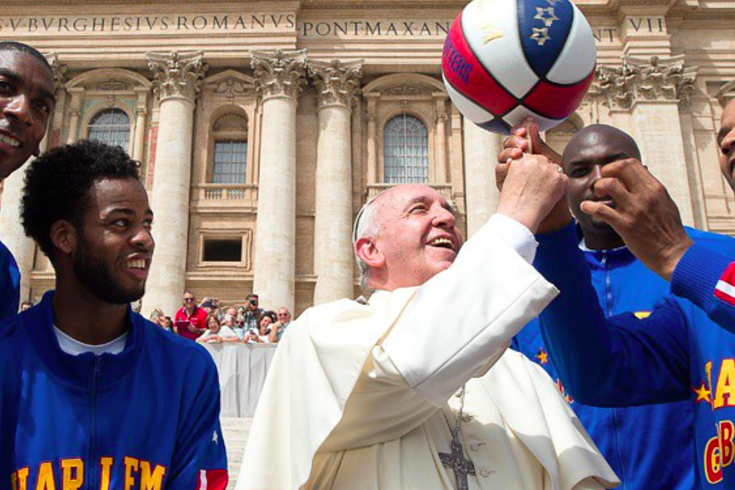 Pope Francis hanging out with the Harlem Globetrotters in Vatican City.

The NBA Draft Lottery isn't for another two weeks, but the Harlem Globetrotters may have just taken the best international prospect off the board.

As part of their 90th anniversary tour, the Globetrotters paid a visit to Pope Francis Wednesday at the Vatican and even let the 78-year-old Argentinian try his hand at some of their old tricks before naming him an honorary Globetrotter, according to Yahoo!:

Pope Francis met with members of the Globetrotters on Wednesday during his weekly general audience in St. Peter's Square. The 'Trotters visited Vatican City as part of a promotional push for their upcoming 90th anniversary tour, marking the eighth time the club has had an audience with a Pope, and they took full advantage, with Globetrotter "Flight Time" Lang getting "a red, white, and blue ball spinning on his own finger, then took the pope's right index finger and let a smiling Francis try it himself," according to The Associated Press.

The team also named Pope Francis an "honorary Globetrotter," a title bestowed upon "an individual of extraordinary character and achievement who has made an everlasting mark on the world." He's just the ninth person ever to receive the weirdly prestigious distinction, joining a pretty broad array of individuals — former U.S. Secretary of State Henry Kissinger, comedian Bob Hope, NBA legend Kareem Abdul-Jabbar, comedian Whoopi Goldberg, South African activist and president Nelson Mandela, Olympic gold medalist Jackie Joyner-Kersee, Pope John Paul II and civil rights activist Jesse Jackson — who would, it's safe to say, make for a fascinating nine-man rotation in a contest against the Washington Generals.

The Pope even got his own jersey: