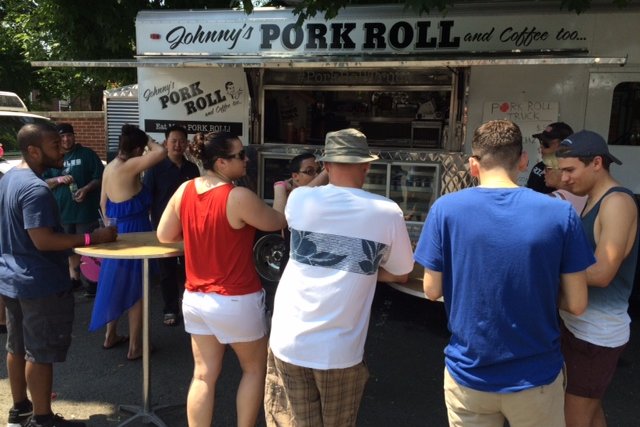 Hundreds lined up Saturday to sample New Jersey's answer to the cheesesteak as Trenton Social's Pork Roll Festival. The festival roll on until 10 p.m.

Pork roll is New Jersey’s gift to the world.

Think of a pork roll, egg and cheese served on a Kaiser roll as the Jersey answer to a Philadelphia cheesesteak and you get the idea.

So much so that two pork roll festivals are going off simultaneously until 10 p.m. Saturday in the place where pork roll was born and still thrives – Trenton.

Today’s post-industrial Trenton still makes, and the world takes: Both main pork roll makers, Case’s and Taylor, are still cranking out their secret blends of pork, salt, sugar and spices in Trenton.

And while the makers are guarded about what goes in their products, fans of pork roll like nothing more than sharing.

Take Mike Portock, 24, from Somerset County, arrived early in the day for his first ever festival at Trenton Social, one festival’s venue.

On the table sat a fistful of food: A Kaiser stuffed with browned slices of pork roll, oozing melted cheese, the yolk of a glistening fried egg dripping sensuously, flecked with salt and pepper with a crimson crown of ketchup peeking out.

But before selfishly taking a bite, Portock did what true Jersey gentlemen are inclined to do first these days: he took a cell phone picture and shared it on Instagram. 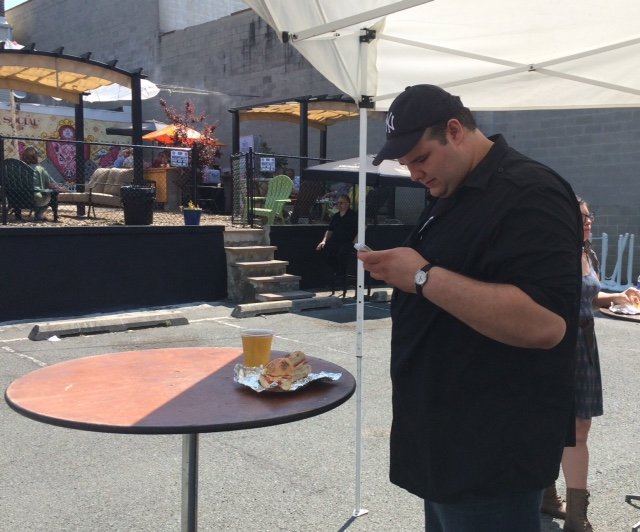 Before taking a single bite of his awesomely gooey pork roll, egg and cheese sandwich at the Trenton Pork Roll Festival, Mike Portlock took a picture so he could share Jersey's gift to the world with others.

“For my friends,” he explained, before taking an oversized bite.

“A couple of my friends are working here, but really, a festival with pork roll? I’m sold!”

Both festivals featured a mix of food, beverage, and music.

Later on Saturday, Miss Pork Roll is expected to be crowned at the Official 3rd Annual Pork Roll Festival at Mill Hill Park in Trenton.

A politician is even expected there to extol the virtue of officially designating the pork roll as the state’s official sandwich, but really, no stinking badges are needed for this designation.

Like Portock, food writer Susan Sprague Yeske, has eaten pork roll since she was a child.
Her memory of the food comes from visits to Ocean City, New Jersey where slices of Taylor pork roll danced across a flame, then settled on a bun.

The long-gone wood-paneled grill served up it sandwiches with frosted mugs of soda, birch beer in particular, on the side.

A former Times of Trenton newspaper food editor, Yeske was approached to provide recipes for the book, The Pork Roll Cookbook. She was at the festival signing copies.

When she began about three years ago, a Google search turned up just seven recipes. So she went about seeking ideas and creating her own recipes, creating 50.

Her favorite is among the simplest: Candied pork roll, which means cooking pork roll with brown sugar to form a glaze.

And while most eat it as a side or as a sandwich, Yeske said pork roll substitutes well for ham or sausage in many recipes.

The book’s history section by journalist Jenna Pizzi recounts the 150-year-old history of Case and Taylor, explaining the cured meat’s distinct salty, but sweet tang resulted from methods of preserving meat before refrigeration.

Pizzi sidesteps the whole is the stuff Taylor Ham or is it pork roll, though she points out that it does not meet -- or is that meat? -- the definition of ham, so indeed all of it, no matter the maker, is pork roll.

The name question comes up mainly as a litmus for where in Jersey do you hail from, with Taylor Ham a New York metro-area term.

In fact, NJ.com's crackerjack digital reporter Stephen Stirling is overseeing a poll to settle this. While the vote goes on until Monday, early voting shows at least geographically about three-quarters of New Jersey say pork roll, not Taylor Ham.

And while neither Case's nor Taylor reps were at the Trenton Social gathering on Saturday, The Pork Roll Princess was there and definitely holding court.

“That’s Robby – nobody calls me Roberta – Goldstein. Goldstein, can you believe it? Goldstein making pork roll!” she said.

Originally a Battisti from a Trenton Italian-American family, her family business, the  Pork Roll Store in Allentown New Jersey, bested its bigger competitors in a blind taste-testing at Trenton Social on Friday, the Pork Roll Princess is eager to point out.

The difference, she said, is her family uses all natural spices.

Saturday was her company’s first appearance at either of the festivals. Goldstein loved the crowds, but hated the heat.

“Divas don’t sweat,” she proclaimed, dabbing away a bit of moisture on her brow.