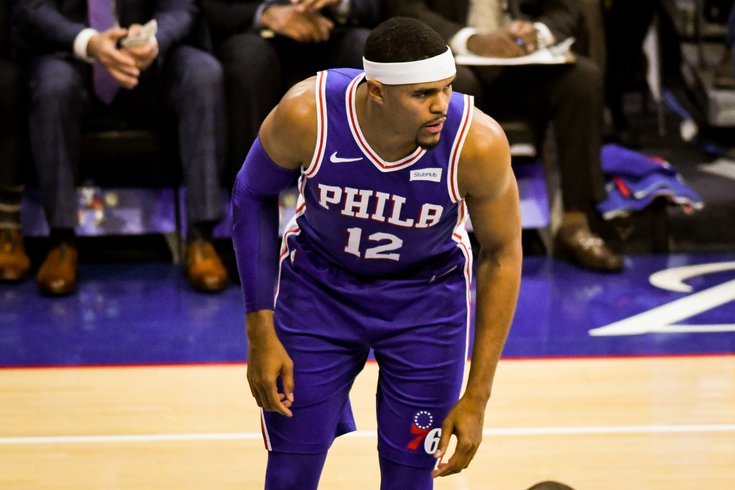 Tobias Harris during the Philadelphia 76ers game against the Boston Celtics at the Wells Fargo Center.

If you think it has been a terrible experience to watch the Sixers go through their paces on offense from the outside looking in, imagine being part of that day-to-day slog as a player or a member of the coaching staff. You come into the season with NBA Finals type expectations, beat your most hated rival on opening night, and then watch as the cracks slowly begin to show, and all the old nightmares about your team construction come roaring back.

But there is no time to dwell or sulk for Philadelphia, as they have a conference they still want to go out and win. And finally, mercifully, they will be back on their home floor for a few games instead of jet setting around the country while trying to build a new identity from the ground-up.

The offense is not good, sandwiched in between the Indiana Pacers and Minnesota Pacers at No. 18 in efficiency through the first 13 games of the season. They have been what their record says they are — a middling basketball team, talent aside. And though the Sixers aren't hiding from the challenge, they understand the battle will be won over time.

"Our problems of concern at the moment are offensively related, it's how do you take this team and grow it to where it's functional?" Brown said at practice Tuesday. "I think it's going to take every bit until Christmas to get some type of rhythm beat to what we do. Along that path, we will never forget that we are a defensive-based program, and everything unravels if we don't do that."

(That defense, by the way, is just barely within the league's top-10, dead even with the Los Angeles Clippers. There are a number of reasons they have fallen short of the league-leading pace they hoped to set this year, from injuries to intermittent complacency to some tough shotmaking from other teams, but they're going to have to be much crisper there to make up for their failings on the other end.)

The question for the Sixers to answer is just how sharp they are able to make this odd collection of pieces on the roster. They believe they are a team built for April, May, and June, though they certainly understand they have a lot of work to do before they get there. It is a roster with two modern centers starting together, a 6-foot-10 point guard who doesn't shoot jumpers, and a severe lack of ballhandling and shooting to go around.

Not all of their problems feel like long-term issues. Al Horford is shooting nearly five threes per game and making just 31.6 percent of them, which isn't reflective of his shooting ability or the quality of looks he's getting. 62.5 percent of his threes are of the "wide open" variety, according to NBA tracking data, and he has been worse on those looks than when he is guarded tighter. Two seasons ago, he shot over 43 percent from deep on those same shots, and most other years he hovers above-average when teams leave him alone.

Unfortunately, this is not as simple as shooting variance. The Sixers are in the bottom third of the NBA in free-throw rate, a number driven by Philadelphia's hub for criticism, Ben Simmons. Simmons is getting to the line less than ever, which you can chalk up to several important factors — he's less active on the offensive glass than in years past, he doesn't have the elite release valve in JJ Redick that he had in the past, and perhaps most importantly, teams are more confident in how they can defend him than ever, with Simmons returning with no meaningful changes to his game this season.

It is a team that is built around a starting lineup with four guys who instinctually see a smaller matchup and try to post them up, but who don't necessarily where to go and what to do when someone else is in that position.

"It's 2019, almost 20, there are only so many blocks to post," Brown said Tuesday. "And so how do we take this thing where we talk about pick-and-roll guys, and who are the pindown guys, and how do you place it on a court? Because we all know accurately, he should be placed here, this is where he can operate the best, now how does that affect the other four people?"

"We can go down and find a mismatch every time down the floor. I thought at Cleveland we did a pretty good job — Ben rolled somebody in, then Tobias, Al Horford, Jo, but at some point, when somebody claims that part of the floor, other people have to react like, well, that real estate is bought. I got to go look at this place and not that place. And that takes time."

• Tobias Harris, when asked for his thoughts on why the Sixers aren't getting to the line as much as they probably should:

"That's a trick question, I don't want to lose no money, so I ain't going to say nothing," Harris said.

But Harris would go on to address the issue, as it is certainly a skill that has to be developed and sharpened just like anything else. Players don't wake up one morning and just start generating free throws in the NBA, and it has been a multi-year process for Harris that he says is impacted by other little factors.

"My whole career I haven't been able to get to the free-throw line at the consistent rate I would like to. And I've watched film, did a lot of studying on how to draw those fouls and whatnot, it's still a work in progress," Harris said. "I'm not a flopper, so I think that hinders me sometimes a little bit. I think we can find some more ways to get to the free-throw line a little bit more. Maybe that's limiting some mid-range jumpers and getting all the way downhill, maybe being more physical, but we'll work at it."

• Asked about a report from ESPN's Adrian Wojnarowski that he would be taking the head coaching job for the Australian national team for the 2020 Olympics, Brett Brown declined to offer a comment. There's something interesting to monitor there for the time being, with a note that this is strictly editorializing and not reporting.

Brown obviously has a deep family history with Simmons, and may soon be connected to him through the international game as well, should Simmons follow through on his promise to play in next summer's Olympics. If the Sixers fail to reach their goals this year, Brown stands out as the obvious sacrificial lamb in Philly.

But with Brown having empowered Simmons as the team's point guard from the beginning — for better and/or for worse, depending on your view — I wonder just how receptive Simmons would be to such a change, and how much influence he would have on potential moves regarding the head coach. I don't need to remind anyone Simmons is a client of an agent who has helped shake up the NBA landscape on multiple occasions.

Everyone has said and done the right things for now, and if the Sixers win at a high level this year, all this will mean is Brown and Simmons double duty. It's just always wise to be mindful of everything we don't see and know, which is often more important than what we can see on the court.