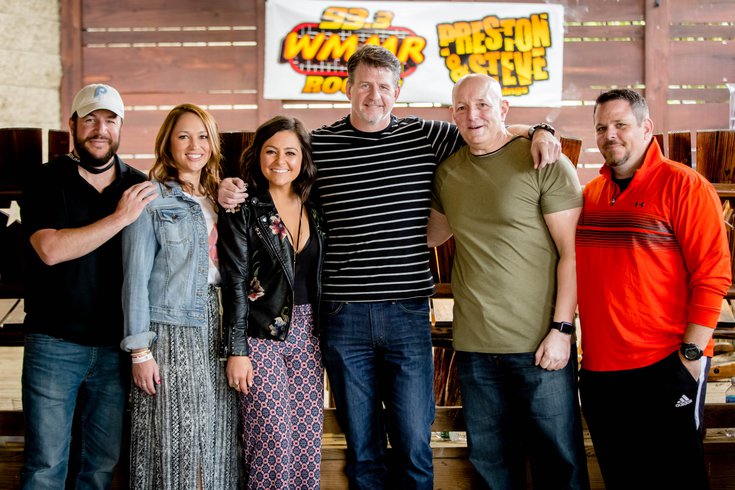 From left to right: Nick McIlwain, Kathy Romano, Marisa Magnatta, Preston Elliot, Steve Morrison and Casey Foster of the 'Preston & Steve' show on 93.3 WMMR. Elliot and Morrison will be inducted into the National Radio Hall of Fame on Thursday, Oct. 28, 2021, at the Wintrust Grand Hall in Chicago.

WMMR's Preston Elliot and Steve Morrison have dominated Philadelphia's morning radio landscape for more than a decade because they've been known to push the envelope on what they can get away with on the air.

"We’ve had weddings, quinceañeras (and) proposals," Morrison told PhillyVoice in 2018. "We had a dumpster pool party in the backyard parking lot."

Now, the co-hosts of "The Preston & Steve Show" have a new accolade to add to their resumes. Elliot and Morrison were selected to the National Radio Hall of Fame's 2021 class in the Spoken Word On-Air Personality category.

"To say that I am overwhelmed is an understatement," Elliot said. "A career in radio has been a dream for me since I was a little kid and to see that dream become a reality was already satisfying enough. I can’t even begin to imagine what that kid would think if he knew that one day, he would be granted the honor of being inducted into the Radio Hall of Fame. This achievement would, of course, not be possible without our loyal listeners and the support of my radio teammates and friends that have helped and inspired me throughout the years. Nor would it be possible without the love from my friends and family. Thank you so much for this honor!"

Elliot, of St. Louis, and Morrison, a Long Island native, joined forces in 1998 for the first iteration of their morning show on Y100. Back then, it was called "Preston, Marilyn and Steve" and featured 98.1 WOGL's Marilyn Russell, who parted ways with Y100 after a four-year run. In 2005, Elliot and Morrison took their show to WMMR, where it has occupied (and crushed competitors) in the weekday 5:30-10:30 a.m. slot ever since.

"I knew we would find our audience — that [they] would find what we did entertaining, but I never thought that we would hit number one and then dominate and hold onto that audience and double that number and keep going and going," Elliot told PhillyVoice in 2018.

"This honor is for the whole show!" Morrison wrote on Twitter. "Congratulations to you, Kathy, Nick, Marisa, Nick Murphy, Connor, and many more. There is no Preston and Steve Show without you!"

Keep that glass up, Casey! This honor is for the whole show! Congratulations to you, Kathy, Nick, Marisa, Nick Murphy, Connor, and many more. There is no Preston and Steve Show without you! :) https://t.co/lFsOQkvZjD

Elliot and Morrison have interviewed everyone from Larry the Cable Guy to Dolly Parton to Carl Weathers. Every year, they hold a Campout for Hunger food drive in the parking lot at Xfinity Live! to raise money for Philabundance.

Elliot and Morrison will be formally inducted during an Oct. 28 ceremony at the Wintrust Grand Hall in Chicago. To see the full list of 2021 nominees, visit the Radio Hall of Fame's website.

"Looking at the list of luminaries currently in the Radio Hall of Fame, I cannot help but wonder what profound clerical error had to occur to put us into their ranks," Morrison said. "Regardless, words can only fail to describe just how humbled we are by this honor. The truth is none of this could have happened without the vigorous efforts of our coworkers, everyone throughout Beasley Media Group, and most importantly, all of our friends and family who hang with us every morning, Monday through Friday, as we talk about ... stuff."