Preston & Steve: No slowing down after 20 years on the air

From horses in the studio to dumpster pool parties to acts of S&M, the fellas at WMMR have almost seen it all in two decades 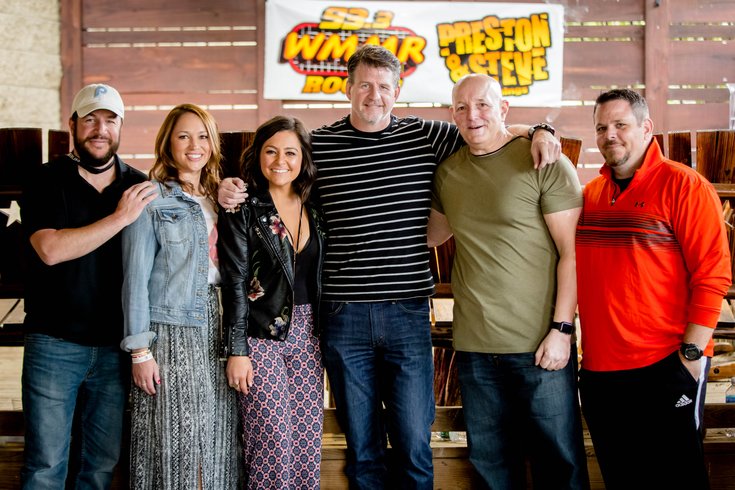 By now, you may have heard that Preston Elliot and Steve Morrison are celebrating a big anniversary.

But what you may not know is what apexes they have reached in their 20 years together – this includes their most extreme moments, best and worst guests, and other behind-the-scenes bits you haven't been able to see while listening on the radio.

Whether you’re a morning commuter, an Internet listener, or tuning in at work, there is little doubt Preston & Steve has evolved into a brand in and of itself. This month, the dynamic duo celebrates 20 years behind the mic together, and they have no plans of slowing down.

Elliot, who acts as the show’s “captain,” steers the ship, and co-host Morrison provides the comedic banter – the real “gut laugh,” as Elliot describes it. But everybody at 93.3 WMMR plays an important role in getting loyal listeners of the Delaware Valley to tune in every Monday through Friday.

For the past decade, Preston & Steve has been ranked the top-rated radio show in Philadelphia, according to Nielsen. In the summer of 2004, the show was rated fourth in the market among people ages 18 to 24, (particularly men) surpassing in popularity Howard Stern’s last month on-air before Sirius, and it outranked each of David Lee Roth’s, Opie and Anthony and Kidd Chris’ tenures at WYSP.

“I never expected that,” Elliot said.

“I thought we were just kind of chugging along. I knew we would find our audience – that [they] would find what we did entertaining, but I never thought that we would hit number one and then dominate and hold onto that audience and double that number and keep going and going.”

Elliot, 50, and Morrison, 58, began their careers at Y100 along with Marilyn Russell (now at 98.1 WOGL) as “Preston, Marilyn and Steve,” in 1998. After a four-year run, Russell parted ways with the station to spend more time with family, and the show moved to WMMR, where it occupies the 5:30 to 10:30 a.m. slot. Every weekday morning, they whoop it up with in-studio and phone interviews, celebrity impersonations, wacky news stories and running gags.

WHAT HAPPENS IN THE STUDIO...

During their time together, Elliot said he and Morrison have been able to push the envelope when it comes to what they can get away with on-air.

From nearly burning down Y100 a couple times to having a horse mosey on into the studio, the fellas said they can’t believe some of the stuff they’ve seen go down.

Occasionally, we’ll bring out the trappings of a zoo, but a self-knowing zoo..."

“As a public service, we had ‘drunk day,’ where we let people know what it’s like when people get drunk…These guys have gotten rip-roaring drunk on air, completing different types of contests and physical agility tests. We’ve had pillow fights…paint ball jeopardy…”

“Remember the time those girls brought in a Cat o' nine tails and beat the sh*t out of that guy?” Elliot reminisced.

“We will push limits in that realm and take it to the extreme…The one thing we don’t want to do is fake it,” said Morrison.

“We’ve done so many things that are out there that – when you talk about moments on the show – it’s just the nature of it. Twenty years…wow," he said. 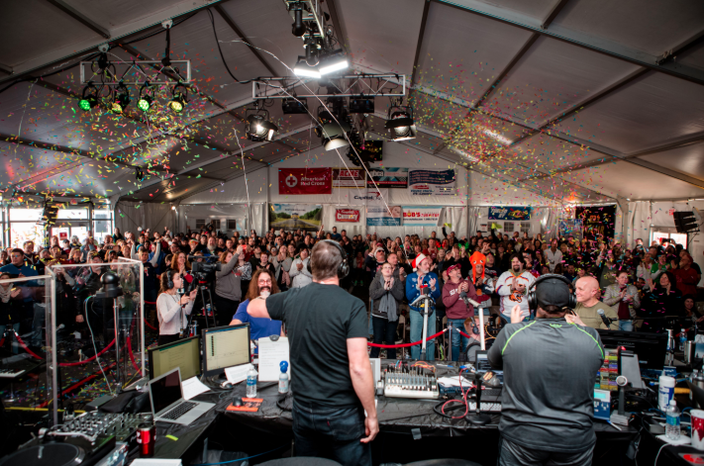 Preston & Steve, along with Pierre Robert and Casey Boy, celebrate the end of the 2017 Camp Out for Hunger food drive at Xfinity Live!

Asked the worst guest they ever interviewed, the pair looked at each other and said in unison:

“It wasn’t even in the studio. It was on the phone and we were just asking legitimate questions. Here’s a guy who’s on an improv comedy show (“Whose Line Is It Anyway?”) and he was arguably one of the funniest ones on the show, so we’re having a light, funny conversation with him and he was having none of it. He wanted to have a serious conversation.”

“We are at the point now where we’ll have major stars in here...Queen Latifah was on and she was half asleep.”

As for best interviews? Both said the makings of a great guest are those who are less pretentious, more obscure, and more open about themselves.

And one of the team’s proudest feats is their annual Campout for Hunger food drive. They started this endeavor in the very beginning, where they do the radio show from the sports stadiums in South Philly and sleep in a trailer every night the last week of the year in the parking lot at Xfinity Live!, all in an effort to fight local hunger. Last year, they collected 1.6 million lbs. of food and raised more than $272,000 for Philabundance.

“We started it year one, and it’s been one of the most consistent things of our career,” said Elliot.