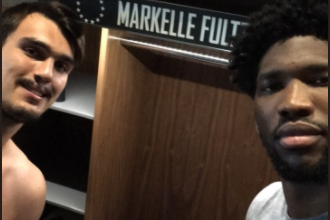 After all of the Sixers trade rumors over the past few weeks, it looks like we’re finally learning the identity of their first-round draft pick.

In what ended up being a pretty poorly kept secret (not that the Sixers mind, especially considering where they’re going to be picking), University of Washington guard Markelle Fultz will work out at the Sixers training facility in Camden in a few hours.

According to The Vertical’s Adrian Wojnarowski, the Sixers-Celtics trade is real. We’ll have to see what the compensation ends up being, but it sounds like the Sixers could be trading another draft pick along with the 2018 Lakers pick:

Sources: The plan's for Markelle Fultz's visit to Philadelphia today to clear way toward finalizing a deal with Boston for No. 1 pick.

Discussions have centered on Sixers sending 2017 No. 3, 2018 Lakers pick, and possibly 2021 1st -- including complicated protections. https://t.co/LwswzXyCzf

Meanwhile, when he’s not poking fun at Dario Saric, Joel Embiid is gathering his teammate for a photo opportunity and strongly hinting at an addition to the Sixers roster. Subtlety has never been JoJo’s strength:

Last year, Ben Simmons posted an Instagram picture of him and Embiid last season at his Sixers workout (caption: TRUST THE PROCESS), putting to rest any speculation of the Sixers drafting anyone else with the top overall pick.

If the trade goes through, the Sixers will own the No. 1 pick in the 2017 NBA Draft as well. The Sixers-Celtics trade isn’t official, but tonight’s Markelle Fultz workout in Camden might be the final step.