A Facebook event to protest the refugee deportations at the airport gained steam over the weekend, drawing support from more than 35 organizations as supporters joined in protests at airports around the United States.

"We will NOT be silent as human beings fleeing war and terror are denied sanctuary," the group asserted. "We will gather at the PHL International Terminal A West (Arrivals) to voice our opposition and to call on all relevant federal, state and local government agencies to refuse compliance with the racist, inhumane, and illegitimate executive orders issuing from this shameful president."

The scene both at and on way to the airport Sunday showed protesters were out in full force. 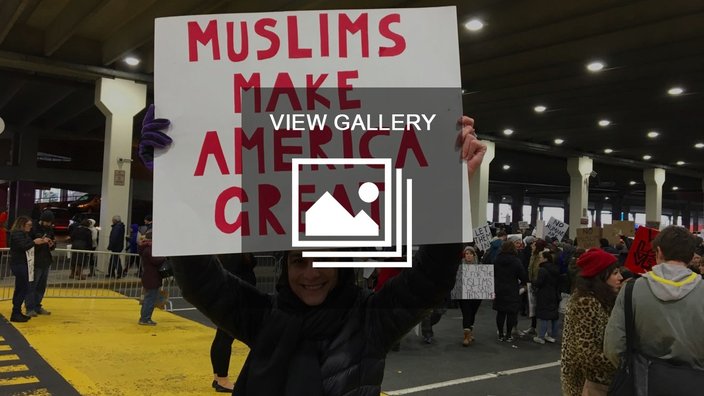 #resist Traffic to get into the Philly airport protest are yuge!!!!! #thisiswhatdemocracylookslike pic.twitter.com/9dLCQizsFu

At this moment crowd size is similar to that of last nights #immigrationban protest at PHL. Do not believe hall is going to be big enough. pic.twitter.com/mkAtz2Ya3l

Spotted on the way to PHL Airport to protest the illegal Muslim ban #IAmAnImmigrant ✊🏽🔥 pic.twitter.com/9jIPwpbumC

The crowd at #Philly airport stretches across Terminal A. Police just expanded the barriers further into road to accommodate crowd. pic.twitter.com/2cjfBXdYjg

Philly folks ain't playing. This airport is rocking with protesters..... "No hate no fear Muslims are welcome here!" #nomuslimban pic.twitter.com/ufOLwGnJ1f

Streets in front of the terminal at Philly airport filling up by the second. Jam packed here. #NoBanNoWall pic.twitter.com/OekggL7j1c

Kenney, who has challenged Trump on plans to strip federal funding from sanctuary cities like Philadelphia, was joined at the airport Saturday evening by Pennsylvania Gov. Tom Wolf, U.S. Sen. Bob Casey, Philadelphia Councilwoman Helen Gym and U.S. Rep. Bob Brady, who turned out to oppose a measure many expected from the president but were disappointed to see so swiftly put into action.

On Sunday morning, Kenney said that all detainees had been released from Philadelphia International Airport and that arriving passengers shouldn't anticipate issues as a result of the executive order.

I am so grateful to all those who worked to see these two new Americans released and reunited with their families, namely the ACLU, the International Refugee Assistance Project, volunteer lawyers, the Philadelphians who demonstrated peacefully last night, Senator Casey, Governor Wolf, Congressman Brady, Congressman Evans, State Rep Brian Sims, State Rep Jordan Harris and Councilwoman Helen Gym. I also thank our other congressional colleagues Rep. Brendan Boyle, Rep. Charlie Dent and Rep. Brian Fitzpatrick for their vocal opposition to this unconstitutional order. While we will have to continue to work to see this order completely defeated, this is an important victory against hate.

We’re proud to announce that in addition to the release of anyone detained at the airport yesterday afternoon, all new passengers arriving today will be treated the same as they would have been prior to the executive order.

The U.S. Department of Homeland Security reiterated Sunday that it plans to enforce all of the president's executive orders, including those on prohibited travel. 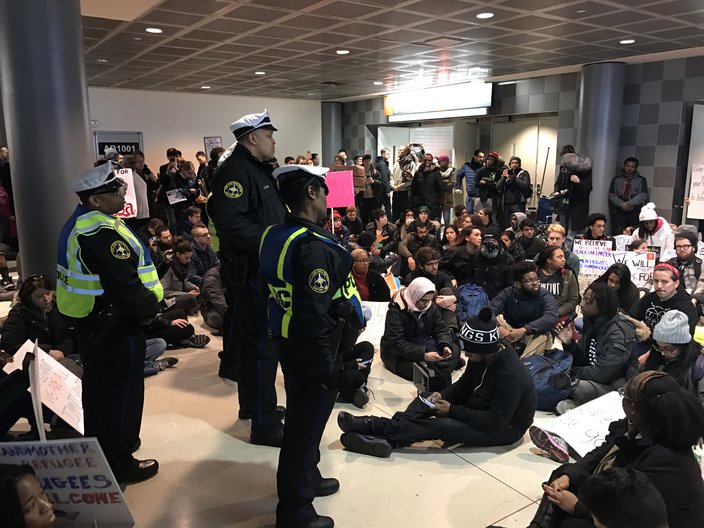 "We are committed to ensuring that all individuals affected by the executive orders, including those affected by the court orders, are being provided all rights afforded under the law," Kelly said. "Accordingly, absent significant derogatory information indicating a serious threat to public safety and welfare, lawful permanent resident status will be a dispositive factor in our case-by-case determinations."

There are signs Trump's policies will face legal challenges, including the decision of a federal judge in Brooklyn to block a portion of the president's order on refugees. Judge Anne M. Donnelly said Saturday night that sending the refugees home could cause "irreparable harm," ruling that the administration cannot immediately remove those detained, though they are also not guaranteed entry.

By Saturday, 109 people who were in transit to the United States, including 11 refugees at John F. Kennedy International Airport in New York City, had been denied entry in the day since President Trump signed the executive order. Another 173 were stopped from boarding planes bound for the U.S. and 81 eventually received waivers to enter the country as protests unfolded at major airports nationwide.