Few films have as much buzz right now as director Todd Haynes' "Carol," the story of two New York women who fall in love in the 1950s.

While, on its surface, it sounds like any standard love story, what's captivated so many are the film's characters, who, rather than express it outright, show their love through 118 minutes of quiet yet passionate moments of intimacy. Cate Blanchett (Carol) gives a performance defined by seductiveness and self-assurance while co-star Rooney Mara (Therese) does just the opposite, surprising audiences with her withdrawn and self-conscious presence. That A-grade acting, coupled with intelligently shot visuals, a moody score and era-appropriate costuming, earned the film honors at the Chicago International Film Festival and Cannes International Film Festival earlier this year. Critics, meanwhile, say the film is likely to nab a "Best Picture" nomination when the 2016 Academy Awards take place in February.

In short, this is a film you'll want to see when it rolls out to the masses Nov. 20.

Following the Philadelphia premiere of "Carol" as part of the 2015 Philadelphia Film Festival, we caught up with Haynes for a glimpse behind his film adaptation of Patricia Highsmith's 1952 novel "The Price of Salt."

Why did you pick this story in particular to tell? What about it captured you?

Well, this one came to me. For the first time, it wasn’t something I originated or developed from the beginning. It had a long history prior to me coming on board, and I didn’t know the novel when it came to me in May 2013, with Cate attached. I read the first draft of the script, and I read 'Price of Salt,' and I know Cate is going to play Carol, so I’m already seeing Cate in the role and it’s starting to unspool in my head as I read it for the very first time.

But I just loved how acute and painful and awkward a story of falling in love it was. And how much that was intensified by being locked inside Therese’s warped, distorted perspective -- her being the more passive character, the weaker character. Carol has almost all the power and agency and all the big conflicts in her life, so you’re on the powerless side of everything. And that’s exactly what falling in love feels like.

The word 'gay' or 'lesbian' doesn’t come up once in the entire film, despite it being a love story about two women. Was that intentional or a product of the time period?

It’s in the book, which is so interesting. It’s in the script. And, of course, there’s that scene that’s really important when Therese is in the record store and she looks and she sees a couple -- a butch-femme couple of women eyeing her -- and she’s horrified. There’s a moment of immediate aversion where she’s like, 'That’s not me! I am not that!' You know? She doesn’t know what she is and she can’t really find the words for it, but when there is that kind of overt image of it, it’s all too complete and finite for her to feel any sorority or comfort in that. It’s so interesting because I think that’s how we form ourselves, through a process of rejection and creating an inside and an outside.

You've talked about paring down dialogue for this film and storytelling through expressions. But thinking back on it, is there any dialogue you wish you’d kept or storytelling you’d have done with more time?

No. I really think the silences speak so loudly and the awkwardness and the gestures -- like, I was just describing earlier this moment in the book when Carol puts her hand on Therese's shoulder at the piano, when she also gives Carol a little quick kiss on the head. And Therese is recounting it in the book like, ‘All I could feel were her fingers burning through my shoulder, and I missed the kiss! The thing I most want to be present for is the kiss,’ but you’re completely distracted by the other thing. You’re not even present for your own pleasure when it might happen to you. And I just am like, ‘Yeah, that’s so smart.’ So I think the camera does a little weird readjustment, which it doesn’t do a lot of in the movie. I think it’s a lot about reducing, to the degree where one small event feels like a bigger event. And if you did too much with the camera before that, it wouldn’t register. It wouldn’t signify.

... The whole movie is a buildup, and some audiences are maybe not going to have the patience for that because it’s quiet and sort of pensive. 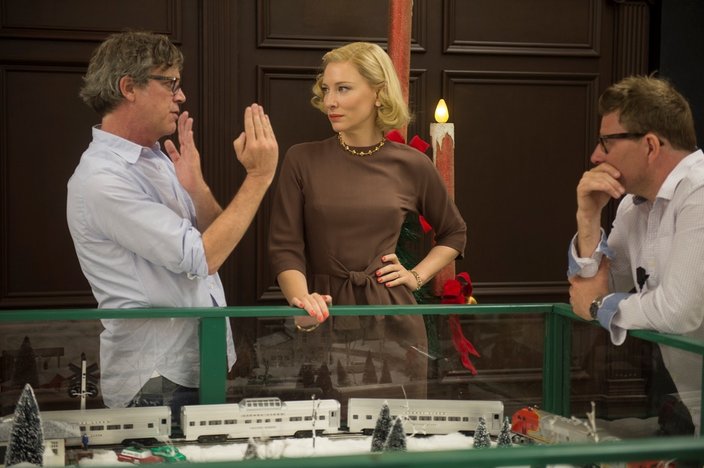 Todd Haynes, left, works with Cate Blanchett to direct the opening scene of the film. Haynes previously directed the 2007 film 'I'm Not There'  and the HBO miniseries 'Mildred Pierce.' (Handout Art / The Weinstein Company)

And maybe because of that, by the end of it, I still felt like Carol was this mysterious woman who I didn’t quite know well but really wanted to.

It’s true of Therese too. The movie doesn’t have -- actually, the script did have more of a scene toward the end where Therese meets up with Danny again, her friend who kissed her that one time, and she formulates in words what her journey has been and how she’s basically learned how to say no. This passage. And we cut the whole scene.

We cut a lot of scenes; it was too long, and they were all well-performed and nicely shot – we never, in my opinion, cut things because they were poorly executed. It was just a paring-down process, which all movies do. But it was also just like, ‘No, it would be weird if this character started to kind of sum up what they’ve learned,’ you know? In this kind of movie, it’s really about people who don’t do that. And most of us don’t – we don’t have these heightened moments of, like, confessional privilege, where everything comes out in a beautiful sentence.

Another thing: Politics finds its way into the backdrop of many scenes. The new president, in particular. Was that built in for a reason?

That’s exactly where that falls – [Dwight D.] Eisenhower ... I inherited the timeframe of the book and decided not to change it for some reason; I decided to honor it. And it also reflected a lot of -- you know, Patricia Highsmith's own life informing 'The Price of Salt.' So it almost feels like it should be honored, the specificity of when it all happened. But when we looked at the timeframe of when this all happened, there was actually a much bigger gap between the election of him as president and when he takes office, and when we found out his inaugural address really would have been in April, or March, whatever it was, and that fell into the timeline of when Carol is trying to rehabilitate herself.

It was just like, 'Oh my God, perfect.' Let’s have Eisenhower’s inaugural address going on TV when she’s at [her husband] Harge’s parents’ house when she’s trying to be the wife who’s doing penance for her transgressions. And you know, 'The Eisenhower era is going to clean up America! And solidify our values! And regulate our options and choices! And provide us all an economy and all those foundations we were lacking!' But that's what makes the real part of the story so interestingly different. They’re so unstable by comparison. That stability feels like it’s going to be a harness coming right around the corner and that’s what Carol is sort of obediently walking into. 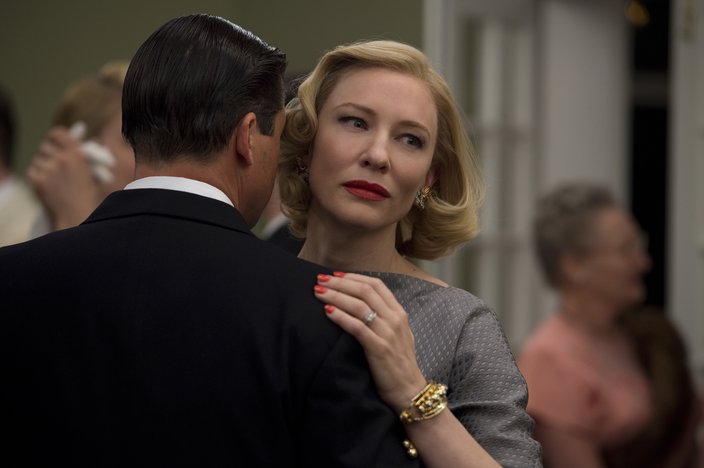 Is there added pressure telling a same-sex female love story from a gay male perspective? Do you have to be a bit more deft?

Not too much. There’s one line I had to check out with my lesbian friends in the script, and it was just when Carol, because some people read it in the draft, and it’s when Carol reveals Therese in the bed and says, ‘I never looked like that.’ And I really thought that was so interesting. Because it’s something two men don’t say to each other even if they’re thinking it. And certainly it’s something a heterosexual couple would never have an occasion to say to each other. But the fact that two women are in bed together and you even think, ‘Oh yeah, I’m sure you looked like s*** when you were her age -- you’re so beautiful!’ But still, it felt like an interestingly honest moment. Men who saw this scene were like, ‘Ah! You should cut that.’ And I asked my lesbian friends, and they were like, ‘Nah, keep that.’ That’s something really unique that only women would share. That kind of confidence.

Touring this around the country, what has surprised you about audience reactions so far?

Well, I think, in general, I’m just really – without sounding too self-congratulatory – I’m really happy it’s connecting with people and audiences. Mostly that’s been the critical word so far with critics and journalists who see all kinds of movies all the time and might be in more of a position to appreciate the pace of 'Carol' and the classic nature of 'Carol' as a kind of real movie movie and the look of the grain [from being shot in 16 mm] and all those things. And that may not be true of the full audiences when it comes out.

I want everyone to -- I guess all the expectations for it, I want them to quiet down so you go into it not knowing too much, if that’s possible today. Because it’s quiet. The movie is quiet and very gently takes you into the world that it’s in, and if you follow it, it has real emotional payoffs. But it doesn’t hit you over the head.

"Carol" will have a limited release in theaters starting Nov. 20.