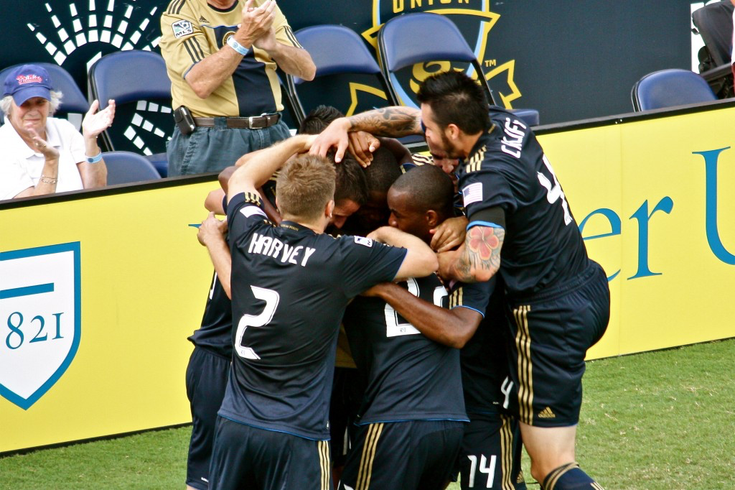 Sebastien Le Toux was the first Philadelphia Union player to reach the 50 goals and 50 assists mark.

Trivia question – what do Landon Donovan, Steve Ralston, Jaime Moreno, and Sebastien Le Toux all have in common?

Answer – all four players have tallied 50 goals and 50 assists in their Major League Soccer careers.

You probably wouldn't think of Seba in the same breath as those other guys, but the numbers don't lie. Philadelphia's all-time leading goal scorer, who was traded to Colorado on Wednesday, quietly approached that benchmark with relatively little fanfare or recognition.

Maybe Le Toux flew under the radar, if that's possible for a member of the "50/50 club". Seba wasn't banging in bicycle kicks, or knuckling dead balls, or diving headers. There wasn't a lot of hype surrounding the Union, who only appeared in the playoffs once during the Frenchman's tenure. Le Toux wasn't hitting the back of the net during nationally televised games in primetime slots.

But all goals count the same, and Sebastien scored a lot of them during his 193 games for the Philadelphia Union.

This one was more symbolic than anything, as it sent the Union to the U.S. Open Cup final for the second straight year.

It was also somewhat different from a typical Le Toux goal. Sebastien is a quick finisher and doesn't usually dribble opponents, or move horizontally across the box. In this case, he takes some extra time to slide to his left, before firing with his weak foot back across the goal and beating Sean Johnson at the near post

This wasn't a highlight reel goal, but it really exemplified the hard work and hustle that we've seen from Le Toux over the years. In this sequence, he pounces on a defensive mistake for a simple tap in, but it's the full sprint from the left channel that creates something out of nothing.

You can't capitalize on defensive errors if you don't put yourself in the right positions to begin with.

This was the infamous Marco Di Vaio hat trick game.

Lost in the Impact beatdown, however, was a really nice late goal. Le Toux takes a wayward clearance, cushions it with his chest, then pushes the ball onto his left foot for a clean, left-footed strike inside the far post.

Yeah, Vince Nogueira's superb assist is the takeaway from this goal, but you have to give Sebastien major props for the thrashing run down the right flank.

There's a bit of hesitation from Tim Melia, who didn't seem to get a good read on the flight of the ball. But the goalkeeper does cut down the angle for Le Toux, who does very well to hit a one-time finish low towards the far post.

He makes it look smooth, but there's nothing easy about this finish.

Le Toux scored a brace in this game.

I love this goal because it's a bang-bang play that starts on the foot of Zac MacMath. Sebastien begins his back-shoulder run as soon as Mike Farfan gets on the ball. The resulting pass is perfect, and Le Toux simply cushions the ball into space with his chest before beating Bill Hamid with a side-footed finish from close range.

The celebration spoofs a famous commercial from 2011 in which a random guy executes a flash mob dance routine inside of a train station, only to realize that he started the sequence a half-hour early.

A symbolic goal and a good finish to boot.

This was the strike that officially put the Union into the 2011 playoffs.

Toronto FC was wretched that season and started the sequence with a terrible turnover in their own half of the field. With Torsten Frings failing to close the gap at the top of the box, Le Toux fired a low curler into the corner.

This was a Goal of the Week nominee.

The passing leading up to this goal is lovely to watch, but it seems to fall apart when Danny Mwanga looks for an outlet at the top of the box. With Le Toux hovering, Mwanga moves out of the way at the last moment to allow his strike partner to bend a perfect ball beyond Matt Reis.

Sebastien endured a terrible slump in the first half of 2011 and had only scored three penalty kicks through the first seven months of the season.

This goal at RSL was actually Seba's first from the run of play that year, and it opened the floodgates as the Union pushed for a postseason berth in the fall.

It's a typical far flank run from Le Toux, who perfectly catches a weighted ball from Justin Mapp. Even though he hits it directly at Nick Rimando, the flush connection simply ricochets the ball off the goalkeeper and into the net.

I put this one all the way up at the number two spot because it combines a couple of different elements.

First, it's excellent recognition of a counterattacking opportunity. Le Toux sees Alejandro Moreno on the left flank and really hauls his way up the opposite side of the field into space. He takes a brilliant first touch on a brilliant pass, gets in front of two defenders, then hits one low and hard at the far post.

It looks very smooth on film, but when you break it down, it's a 50 yard sprint, soft first touch, and cool finish.

This one has to be number one because of the sublime control.

It may even be ironic, just for the fact that we saw Sebastien's first touch let him down so many times during the course of his career.

In this case, it certainly did not.