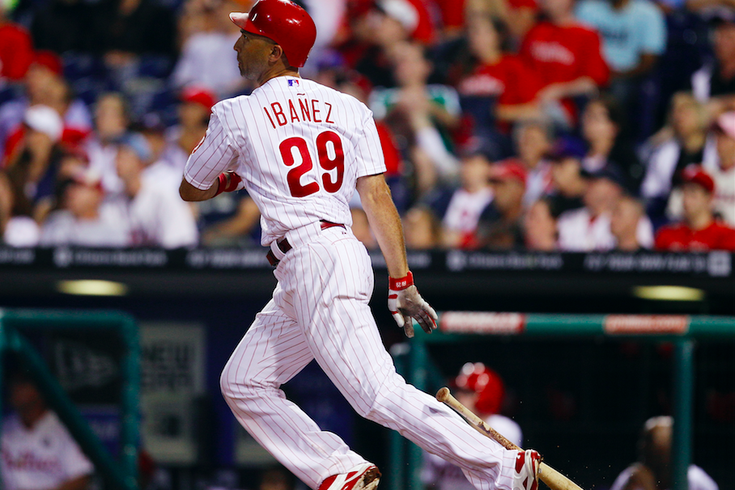 Raul Ibanez follows through after hitting the game-winning home run during a baseball game against the Atlanta Braves, Friday, July 8, 2011, in Philadelphia.

ESPN has chosen another former Philadelphia Phillie to replace the one it cast off as a studio analyst and host of "Baseball Tonight," the network announced Wednesday.

Raúl Ibañez, who played in the Phils' outfield from 2009-2011 and served most recently on the Kansas City Royals' coaching staff, will replace Curt Schilling beginning tonight on "Wednesday Night Baseball" as the Yankees host the Texas Rangers. Ibañez will also appear as a contributor on "SportsCenter" and other news and information programming.

Schilling was fired last week following the latest in a series of recurring social media missteps. The self-professed right-winger took to Facebook to criticize outrage over a controversial North Carolina law restricting transgender people from using facilities that match their gender identification. Previously, he had been suspended by ESPN for a Tweet comparing Muslim extremists to Nazis.

"ESPN is an inclusive company. Curt Schilling has been advised that his conduct was unacceptable and his employment with ESPN has been terminated," ESPN said in a statement last week.

Days later, Schilling reacted to the situation in an interview with Breitbart News Daily on SiriusXM.

“I don’t have a racist bone in my body. I’m not transphobic. I’m not homophobic," Schilling told Breitbart News Executive Chairman Stephen K. Bannon. "As long as you’re not sleeping with my wife, I don’t care who you sleep with.”

Ibañez played 19 seasons in the MLB, including stints with the Mariners, Royals, Phillies, Yankees, Angels, and Royals. He appeared in the 2009 All-Star game as a Phillie in 2009 on a team that won a National League pennant.