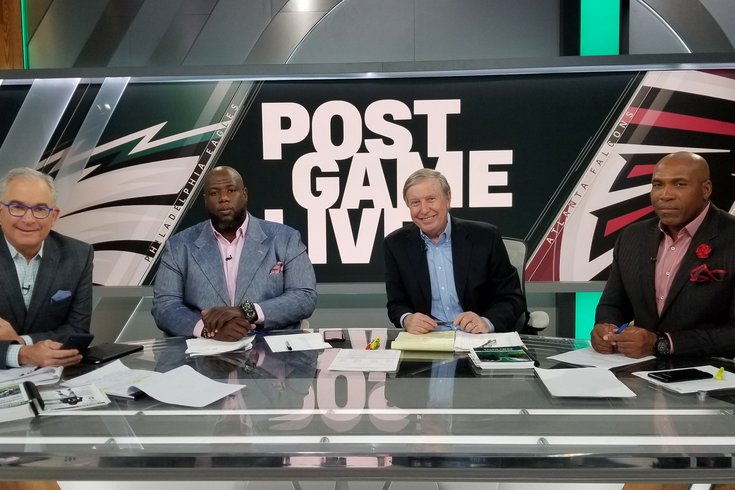 Ray Didinger (third from left) can be seen on NBC Sports Philadelphia's Eagles Postgame Live during the football season.

Ray Didinger, one of Philadelphia's most beloved and accomplished sports writers, has possessed the rare ability to balance his love for the Eagles with his journalistic responsibilities.

That is one of the main topics that the Pro Football Hall of Famer will explore in his forthcoming memoir titled "Finished Business: My Fifty Years of Headlines, Heroes, and Heartaches."

The memoir will explore Didinger's childhood growing up a diehard Eagles fan in Southwest Philly, his five-decade career in the media industry and balancing his Eagles fandom with his sports reporting duties, which reached its apex three years ago when the team won Super Bowl LII over the New England Patriots.

The 360-page autobiography, which will be released May 26, is described being "as passionate as an autumn Sunday at Lincoln Financial Field." It is currently available for preorder.

The 74-year-old Didinger will discuss his memoir alongside television and radio host Michael Smerconish in a free virtual event at the Free Library of Philadelphia on May 26 at 7:30 p.m.

Didinger started in the business covering the Eagles in 1970. He covered sports, most notably the NFL, for over 25 years for The Philadelphia Bulletin and the Philadelphia Daily News.

His sports writing has earned him a number of accolades. Didinger was named Pennsylvania Sportswriter of the Year five times and became the first print journalist inducted into the Philadelphia Sports Hall of Fame. His name has been added to the writers' honor roll at the Pro Football Hall of Fame in Canton, Ohio.

Didinger has authored or coauthored 11 books about sports and sports writing, including "The Eagles Encyclopedia." A revised and expanded edition of the book was published in 2018 after the team won its first Lombardi Trophy in franchise history. He also wrote "One Last Read: The Collected Works of the World's Slowest Sportswriter" and "The Ultimate Book of Sports Movies."

Didinger wrote an autobiographical play called "Tommy and Me" about his friendship with Eagles Hall of Famer Tommy McDonald, and how the latter reached Canton. It was produced by Theater Exile in Philly and premiered in 2016.

Didinger can be heard on SportsRadio 94WIP, where he hosts a talk show, and seen on NBC Sports Philadelphia, where he appears on Eagles Postgame Live during the football season alongside host Michael Barkann and analysts Barrett Brooks and Seth Joyner.