A recap of the Eagles' injuries, five weeks before Week 1 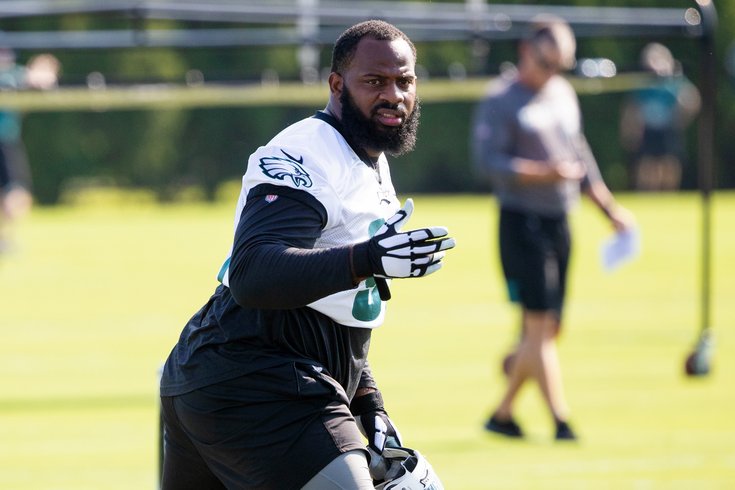 Fletcher Cox is not yet a full participant at Eagles training camp.

The football gods spared the season of Philadelphia Eagles linebacker Kamu Grugier-Hill, as he avoided a dreaded ACL tear, and instead will "only" be out roughly a couple months with an MCL sprain.

Now feels like an appropriate time to update the Eagles' injuries:

Likely to miss some time during the regular season

• CB Jalen Mills (foot): Mills began training camp on PUP, as he is still recovering from a foot injury last season sustained in London against the Jaguars. Not only did he not participate in spring practices, but he didn't even work off to the side with other injured teammates while practice was going on. In training camp, Mills has been working out on a side field. With Mills out and Ronald Darby not practicing, younger corners like Avonte Maddox, Sidney Jones, and Rasul Douglas have gotten first-team reps.

• CB Cre'Von LeBlanc (foot): LeBlanc reportedly has a Lisfranc sprain. His wide timetable for return is anywhere from September to November. The Eagles signed Orlando Scandrick to be a backup slot corner in LeBlanc's place.

Likely to cost them a job

• LB Paul Worrilow (knee): The team classified Worrilow as "week to week," which will all but end his chances of making the team. Worrilow has been recovering from a torn ACL suffered during 2018 OTAs, but has had setbacks.

• WR Mack Hollins (hip): After finally returning from the groin injury that kept him out for a year, Hollins quickly injured his hip. Hollins made some plays in the short time he was healthy, and in my view, isn't in danger just yet of losing his roster spot.

• TE Richard Rodgers (foot): The Eagles classified Rodgers as day-to-day. However, they also signed TE Alex Ellis, so maybe they think of Rodgers as somewhere in between day-to-day and week-to-week, and needed a tight end to fill out their third team in practice.

Practicing, but not yet full participants

• DT Fletcher Cox (foot): During the Eagles' loss to the Saints in the divisional round, Cox was forced to leave with a foot injury, though he did return to the game and played through significant pain. He had surgery to repair his foot, but is expected to be good to go for the start of the season.

• RG Brandon Brooks (Achilles): With Brooks still recovering from a torn Achilles suffered in the Eagles' playoff loss to the Saints a mere six-plus months ago, it seemed like a foregone conclusion that he would start training camp on PUP. Nope. He practiced on Day 1, but has not yet participated in team sessions. In his absence, Halapoulivaati Vaitai has gotten all the starting RG reps, and has looked fine. There's no need to rush Brooks back, but it appears he won't miss much time if he's not ready for Week 1.

• DE Derek Barnett (shoulder): Barnett's season ended early in 2018 as a result of a torn rotator cuff. There's no concern presently that he won't be ready for the start of the season.

• CB Ronald Darby (knee): A report emerged prior to camp that Darby would land on PUP. Nope. Like Brooks above, Darby practiced on Day 1, but has not been a full participant. There's no need to rush Darby back, as Maddox, Jones, and Douglas are all having good camps.

• LB Nigel Bradham (toe): Bradham tore ligaments in his toe against the Saints (what a brutal loss, geez), and he had offseason surgery. His timetable for return is uncertain.

• S Rodney McLeod (knee): McLeod continues to recover from a torn ACL/MCL suffered Week 3 against the Colts. Andrew Sendejo has gotten first-team reps in his absence.

• RB Corey Clement (knee): Did Clement tear his ACL or not? There were reports that he had, but he denies it. Anyway, his participation ramped up this past week, but he's still not a full participant.