Recap: A look at the Eagles' five trades since the start of training camp

Here's a completely unnecessary snapshot of those five players, in stick figure form: 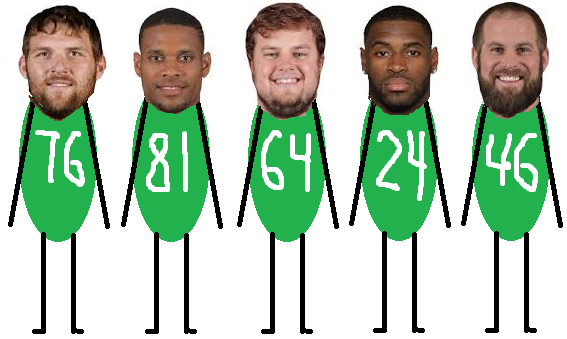 Good, bad, or indifferent, no team in the NFL strikes as many trades as the Eagles, or more specifically, Howie Roseman. Let's quickly recap each of those five trades:

1) Eagles trade Allen Barbre to the Broncos for a conditional seventh-round pick.

Barbre proved to be a versatile player in 2016, playing multiple positions along the offensive line. At a minimum, he is a competent reserve. However, he has a history of injuries, he turned 33 in June, and his quality season last year has not been the norm over his career. It is thought that the Eagles will receive a seventh round pick if Barbre makes the Broncos' roster, but that is not something PhillyVoice has confirmed. It is noteworthy that by trading Barbre, the Eagles also gained $2.1 million in salary cap space.

2) Eagles trade Jordan Matthews and a third-round pick in 2018 to the Bills for CB Ronald Darby.

As you might expect for a legitimate starting cornerback, the price wasn't cheap to acquire Darby, as the Eagles had to send a third round pick along with Matthews. In reality, Matthews was probably more of the "throw in" than the third round pick.

Darby is entering his third year in the NFL, meaning that the Eagles will control his rights through 2018. He is still only 23 years old and is very clearly already the Eagles' best corner.

3) Eagles trade Matt Tobin and a seventh-round pick to the Seahawks for a fifth-round pick.

Tobin had something of an uphill climb to just to make the Eagles' roster this season, and yet, because the Seahawks suffered a major loss when starting LT George Fant was lost for the season with a torn ACL, the Eagles were able to move up two rounds with one of their picks in the 2018 draft as a result.

4) Eagles trade Terrence Brooks to the Jets for Dexter McDougle.

Brooks had a solid start to camp, but has trailed off in recent weeks, and was not a lock to make the 53-man roster, as we pointed out in our latest roster projection. Brooks is a physical safety, but lacking in ideal coverage skills, which Jim Schwartz prioritizes from his safeties.

5) Eagles trade Jon Dorenbos to the Saints for a seventh-round pick in 2019.

In return for a 37-year old long snapper, the Eagles got a draft pick in return.

Here's a snapshot of all the incoming and outgoing assets since the start of camp.