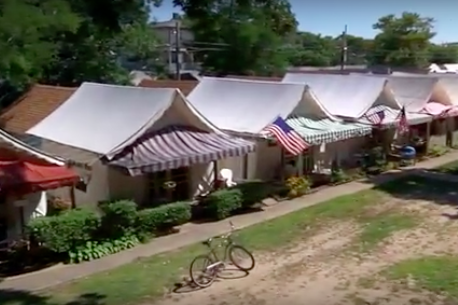 Most of the last century's devastating bloodshed and crippling paranoia can be attributed to ideological battles over how to install an ideal socioeconomic system that never seemed to materialize as any of the world's adamant contestants envisioned it.

If you go to the Jersey Shore, though, there's this Christian tent colony that figured it all out around 1869 and now offers a refuge from the exclusive ills of luxury tourism.

Not to say the United Methodists' stretch of Ocean Grove isn't exclusive: it's been pared down over time from more than 650 tents to 114. Also, it's hardly cheap to get a tent—about $6,000 for the summer—when you consider that the same spare amenities exist at bargain rate motels all along the New Jersey coast.

But exposing the Mammonic cosmopolites of the world is not the point along "God's Square Mile," as the colony's tenters affectionately call their microdevelopment. Several of them recently spoke to The Wall Street Journal and exuded the pride of a casually righteous bunch.

"[You] never know what someone has in their bank account," said one tenter. "A tent is a tent. It’s an equalizer.”

After a morning Bible-hour, the tenters gave WSJ the ethnographic scoop on what life is like when you live in a tent attached to a tiny hut, surrounded on each side by near replicas.

You don't gossip, you're never lonely and if you have to print something out, someone on God's Square Mile has a printer you can use.

Why not? It isn't really fair to call this colony a cult when lawyers, nurses, executives, preachers and limo drivers spend summers there. It's just an anomalous tradition built on unyielding faith.

If this is sounding pretty good and you're tired of all the usual fun in the sun ... you are not in luck, sorry. You have very little chance of getting into a tent anytime soon. The typical wait time to get into one, according to the WSJ, is about 20 years.

Anywho, here's a video and more background to help you revive the tenter inside us all. May the world will be a better place. Respect. One love.