Opening of Cooper House restaurant delayed until May 16 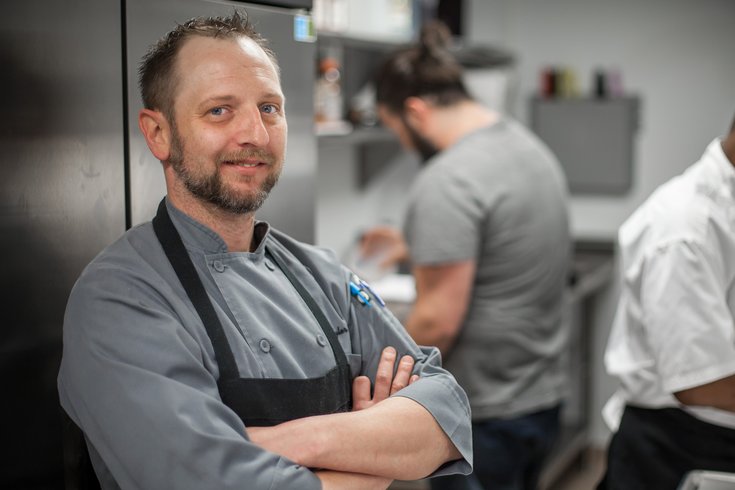 Tyler Turner is executive chef at the Cooper House restaurant.

Pedal your bike. Paddle your kayak. Head for food and beverage at the melting pot known as South Jersey’s Cooper River Park beginning May 16.

That’s the revised date when the Cooper House will have a soft opening after a $2.3 million refurbishment of the once-dank – and now inviting – rechristened restaurant at 5300 North Park Drive in Pennsauken.

Kevin Meeker, owner of nearby Haddon Township’s Keg and Kitchen, the previous owner of Philadelphia’s Fish Company, which is no more, and a silent owner of another Old City Philadelphia Irish bar, is the new leaseholder.

The Haddonfield resident tapped South Philly’s Tyler Turner as executive chef after announced-chef Tony Clark took another position in Cape May because of delays in getting Cooper House open.

Turner was in the kitchen Thursday, honing recipes for the American regional fare he has planned from stints with Susanna Foo in Center City, the Hotel Hershey and most recently El Vez, a Starr restaurant with a Mexican theme in Center City Philadelphia.

He plans to mix in Pennsylvania German, Haitian, Sicilian Mexican and Asian cuisines, offer salads that are at once hearty and healthy (think chopped kale with vinaigrette), make desserts in-house (right down to churning the ice cream for a banana split ice cream cookie) and rely on local purveyors as much as possible.

He says some items to check are his wings, both classic American-style and a Vietnamese version heavy on the salt and vinegar, as well as a roasted cauliflower dish.

Dominic J. Vesper Jr., the deputy county administrator, said Camden County owns the building, which dates to the 1930s when the park opened, and made the renovations. Meeker and his partners are paying $5,500 a month in rent and they have a profit sharing agreement with the county at 7 percent.

The 5,374-square-foot interior has a woodsy feel with gorgeous views of the river and one side of the dining room opens up to a 1,000-foot beer garden. Meeker’s nearby Keg and Kitchen is known for its rotating list of beers and small beer garden.

He says he doesn’t worry about cutting into his established business. “I’m a firm believer everyone can survive,” he says.

“Our mission here is to bring people together. This park is as diverse as it can be,” he says, pointing out the wide socio-economic mix from five towns that touch the park, on a dammed section of the river.

“We’re aiming for a meeting place for the community,” says the chef, mentioning that the county cleared away a berm so there is a clear sightline between the restaurant and a nearby children's playground.

Meeker and Sandi Kelly, the county’s events and outreach director, said the ability to come to the restaurant by bike or boat means it fills a unique niche in the area.

A grand opening is planned for June 5, after opening kinks are ironed out. The business will support between 30 and 50 jobs; the beer garden will operated nine months of the year.

Riverton, Burlington County resident Ken Merriman, the manager, says ramping up for opening is “pretty intense,” and involves lots of “arguing and drinking.” A bottle of top-shelf Scotch and a top-shelf bottle of Irish whiskey – Merriman was born in Ireland – apparently aided the discussion Wednesday night.

There are a few openings left for servers. Merriman said job-seekers should print a resume and stop by soon in person.

“We’re looking for hospitality from them. Giving people an escape from the real world. Psychology is a big part of hospitality.

“That means trying to figure out what they are here for and then facilitate that. It should be smooth and effortless,” say Merriman with a twinkle that reflects his surname.