Will Smith swings through West Philly for a cheesesteak 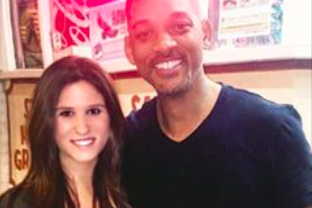 Will Smith takes photo with fan at Overbrook Pizza in West Philadelphia.

International superstardom is not enough to keep Will Smith from returning to West Philadelphia for a cheesesteak.

The Wynnefield native and Overbrook High School graduate, who will appear this summer in DC Comic's "Suicide Squad," was spotted Tuesday night at his preferred hometown location, Overbrook Pizza (a contrasting opinion to fellow Philly native Kobe Bryant, who prefers Larry's Steaks on the Main Line). Smith, joined by bodyguard and producer Charlie Mac, was kind enough to take a few photos with fans at the pizza place (h/t Eater Philly). 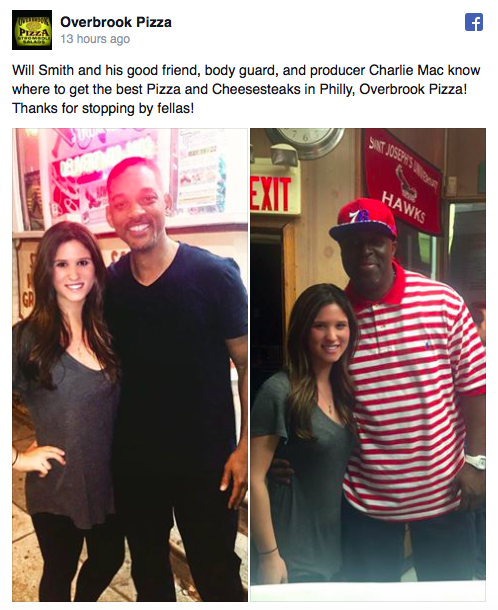 Will Smith stops by his hometown cheesesteak spot, Overbrook Pizza.

Coming off the controversial NFL biopic 'Concussion,' Smith is reportedly on board for 'Bright,' a Netflix feature that will blend elements of fantasy into an L.A. cop thriller saga with Joel Edgerton. Smith's "Fresh Prince" days in Bel Air include a diatribe, in a cut-off vintage Sixers tee, about what constitutes a real deal cheesesteak.

It's not clear whether Smith stuck around Philadelphia for Pennsylvania's primary election, but the actor has expressed interest in launching a political career of his own. He even dined recently in L.A. with President Obama, whose potential replacements are still figuring out how best to handle the cheesesteak photo op — something John Kasich may just want to avoid altogether.

As of April 26, Roxborough's Dalessandro's is atop the leaderboard, but The Groove Cheesesteak Co. is hot on its greasy trail. Philly needs you to fulfill your civic duty by voting once per day until midnight on May 9. Nothing short of our city's entirely reductive pop cultural grounds are at ... steak?