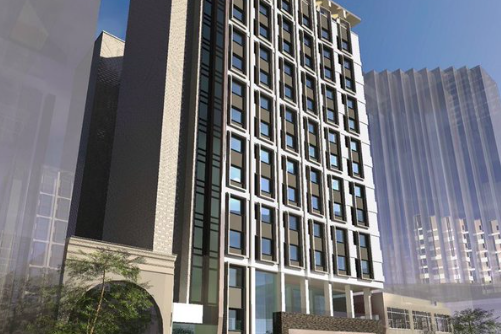 As Philadelphia continues its surge in hotel development, plans for a Cambria property at the northeast corner of Broad and Locust streets are taking shape after Pearl Properties revealed a rendering of the 206-room project along the Avenue of the Arts.

The hotel was announced last November after an agreement was reached between Maryland-based Choice Hotels International and Pearl Properties, which will extend its footprint in Center City, where its projects include The Granary Apartments, 1700 Chestnut, The Sansom and 1401 Walnut.

"This is a milestone for the Cambria brand as we continue to fuel our expansion in the upscale segment and focus on a culture of exceptional service," said Michael Murphy, a spokesman for Choice Hotels International. "To us, it's not only about building great properties but also building a brand promise that we can deliver to all guests that makes every guest feel like a VIP."

After Pearl purchased three properties at the site last summer, mainstay Mediterranean seafood restaurant Varalli closed its doors and doubts grew about the future of Perch Pub on the second floor of the corner building. As Naked Philly points out, the hotel rendering, posted on Twitter by Inga Saffron, only appears to occupy the space next to that two-story structure. Unless a future development is in the works, it looks like Perch Pub will stick around.

Pearl Properties is putting out designs faster than I can write them. This hotel would replace a Broad St. garage. pic.twitter.com/MSvKfyO3ZS

At the time of the hotel announcement, project planners emphasized that Cambria's business travel and leisure brand aims to provide a social atmosphere for guests, including large lobbies and spacious rooms. In addition to Social Circle, a contemporary bistro serving local specialties from chef Michael DeMaria, the property will also include a first-class restaurant on the ground floor (the rendering simply says "Strip Steak," so we can probably expect something in that realm).

The Cambria hotel and suites is expected to open its doors in 2017.