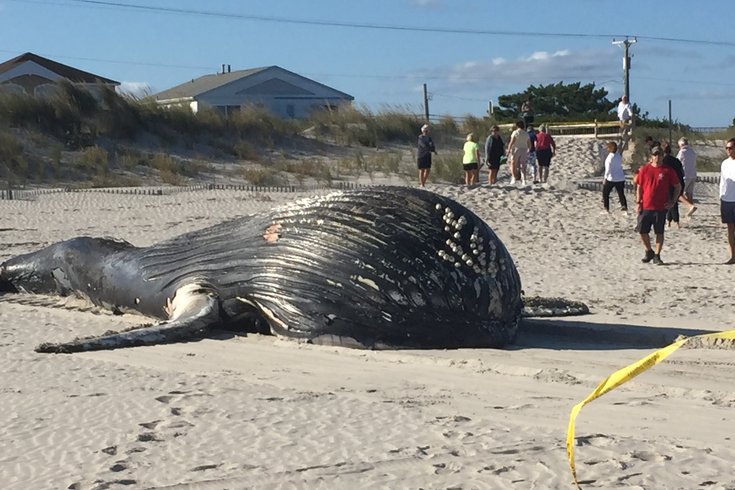 A dead humpback whale washed up on a Sea Isle City beach near 20th Street on Friday, Sept. 16, 2016. The young, male whale reportedly weighs an estimated 20 tons and is about 33 feet in length. No cause of death has immediately been determined.

A massive humpback whale that washed ashore in Sea Isle City on Friday likely became ill and eventually died as a result of contact with human civilization, according to marine life experts.

The young male humpback — 20 tons and 33 feet in length — became beached at 20th Street after it was first spotted floating off the coast of Strathmere. The Marine Mammal Stranding Center (MMSC) arrived at the scene with heavy machinery and managed to remove the whale, cautioning at the time that it was too soon to determine a cause of death.

Dead humpback at 20th Street. Crews on scene to remove it. pic.twitter.com/2hvLFVBcaq

On Sunday afternoon, according to 6ABC, MMSC officials revealed the results of a necropsy completed at some point on Saturday. The whale, it appears, became entangled in commercial fishing line that scarred its body and may have impacted its ability to eat.

Bob Scholekopf, a spokesman for the center, said the whale was "emaciated" and had only a small amount of food in its stomach at the time of its death. It was also struck by a ship at one point, Scholekopf added, though he suspects this occurred after the whale had already died. It likely remained in the water for several days before washing ashore.

Following the completion of the necropsy, the whale was buried on Saturday.

Humpback whales, which belong to the baleen family, are present throughout all of the world's major oceans but have been protected as an endangered species in New Jersey since the early 1970's. When fully grown, humpbacks can reach up to 60 feet in length and live between 45-50 years.