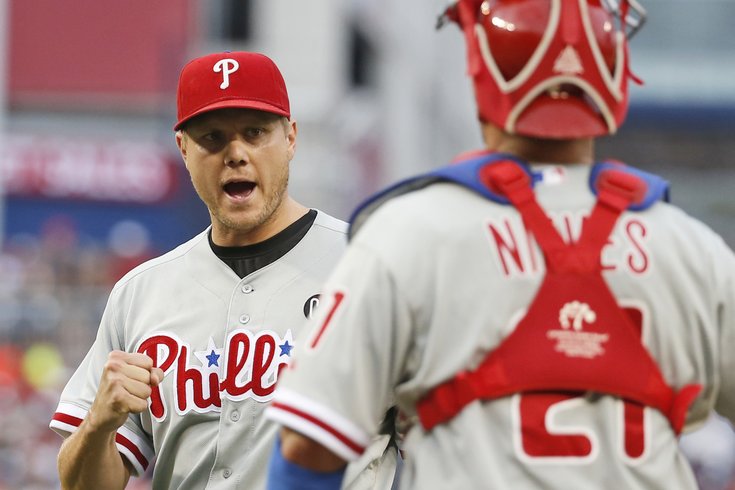 In recent weeks, there have been several reports that the Phillies have discussed trading lefty Cole Hamels, but another pitcher could be moved first.

According to a report from ESPN, the Phillies and Milwaukee Brewers are in talks about a trade involving closer Jonathan Papelbon.

A source told ESPN that Papelbon can block a trade to the Brewers, but would waive that if the vesting option for 2016 is guaranteed.

The Phillies' desire to trade Papelbon is no secret as they start a massive rebuild that already has seen more than $40 million shaved off their estimated opening day payroll.

The 34-year-old Papelbon had 39 saves and a 2.04 ERA last season, but his flagging velocity and perceived negative attitude -- Papelbon was suspended for seven games last September after grabbing his crotch following a blown save -- led to them looking for a trading partner.

Ken Rosenthal of FOXSports.com is reporting that the talks are not that far along, as the team has yet to approach Papelbon about waiving his no trade clause:

#Phillies’ Papelbon has not been approached about waiving no-trade to #Brewers, per source. Sign that talks are not in advanced stage.

Papelbon, who has a 17-team no-trade clause, is scheduled to make $13 million this year and has a $13 million vesting option for 2016 that kicks in the 10-year veteran closer finishes 48 games this season.

Another reason the team could be looking to move Papelbon is the emergence of Ken Giles, 24, as a legitimate option as a closer. In 44 games last season, his first with the Phillies, Giles - known for his ability to hit triple digits on the radar gun - had a 1.18 ERA while averaging 12.6 strikeouts per nine innings and finished fourth in Rookie of the Year voting.