Report: Phillies 'zeroing in' on Dusty Wathan for manager job 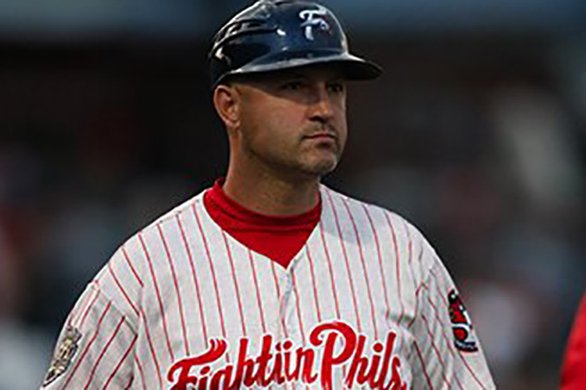 The Phillies search for a manager is nearly four weeks old, but it could be coming to an end sooner rather than later.

According to a report from USA TODAY’s Bob Nightengale, the new manager could be a familiar name: Dusty Wathan. Nightengale tweeted Wednesday morning that the Phillies were “zeroing in” on Wathan to become their next manager.

The Philadelphia #Phillies zeroing in on Dusty Wathan to become their next manager, promoting him from Triple A Lehigh Valley

Wathan is also the son of a former big league manager (John Wathan) and is already a popular figure in the young Phillies clubhouse. Rhys Hoskins, Nick Williams, and J.P. Crawford, who all made their big league debuts this summer, all credited Wathan for their rise through Reading to Lehigh to the big leagues in the last two years.

“Dusty’s been great for the couple years that I’ve played with him,” Hoskins said. “You hear a lot of guys say that this guy is a player's manager. Well, Dusty is that to a ’T.’ I felt very comfortable going to him with baseball stuff and non-baseball stuff. To have that in your manager’s office is pretty special and just adds to the bond that he has with his players.”

“He was my favorite manager in pro ball when I was coming up,” J.P. Crawford said before the final game of the 2017 season. “It would be fun if he comes up here and gets the job. I don’t see why not.”

Wathan was one of three internal candidates, along with Jorge Velandia (special assistant to general manager Matt Klentak) and Juan Samuel (third base coach) to interview for the job. Both could find a way onto the 2018 managerial staff, ditto hitting coach Matt Stairs. Among the external candidates to interview for the vacant manager's job were former Indians pitching coach Mickey Callaway (named the Mets manager this week) and Dodgers player development director Gabe Kapler.