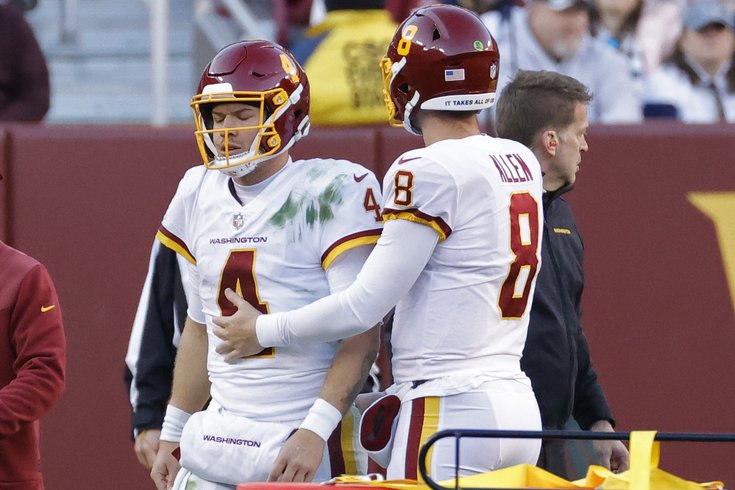 Taylor Heinicke and Kyle Allen will both be out against the Eagles on Sunday, assuming the game isn't postponed.

Washington Football Team starting quarterback Taylor Heinicke has tested positive for COVID, according to multiple reports, which will make him ineligible to play against the Philadelphia Eagles on Sunday, assuming the game is not postponed.

According to Adam Schefter, Garrett Gilbert is expected to sign with Washington today, and is "in line" to start against the Eagles.

Washington’s top two QBs, Taylor Heinicke and Kyle Allen, are now on the Reserve/COVID-19 list, leaving Garrett Gilbert - who is signing today with the WFT - in line to start Sunday vs. Philadelphia.

Schefter must've soon after gotten a text from Washington, asking him to tweet that a decision has not yet been made on the starter.

With Taylor Heinicke and Kyle Allen now on Reserve/COVID list, here are the WFT QBs:

WFT unlikely to name a starter until pregame Sunday, per source. https://t.co/L6QS1VMfgK

MORE: Mailbag: Why can't Minshew be the Eagles' long-term answer at QB? | Eagles vs. Washington: Predictions, betting odds and more for Week 15

Neither Kyle Shurmur nor Jordan Ta'amu have ever appeared in an NFL regular season game.

Gilbert is a journeyman quarterback who will be on his eighth NFL team after he was a sixth-round pick of the Rams in 2014.

A snapshot of his career:

He also played one season in 2019 for the Orlando Apollos in the Alliance of American Football (AAF).

Gilbert started one game for the Dallas Cowboys last season, a 19-24 loss to the Pittsburgh Steelers, in which he went 21 of 38 for 243 yards, a TD, and an INT. Prior to that start, he had only attempted six career passes.

The line in this game, which opened at PHI -5, has moved all the way to -13.5 at some books, as having to sign a player like Gilbert to start, with only two days of preparation, is, uh, not ideal. #Analysis.