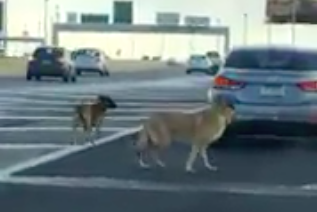 Two dogs spotted without an owner on the on ramp to the Betsy Ross Bridge on December 15, 2016.

Two dogs were reportedly witnessed scampering unattended along a rampt to the Betsy Ross Bridge on Thursday afternoon, prompting officials to capture one and search for the other.

The incident was captured on video by Marlton resident Sean Kelly, who posted the footage on Twitter to let police and media know what was going on.

According to CBS3, officials with the Delaware River Port Authority said the dogs, a German shepherd and a hound, wandered onto the bridge from Richmond Street.

In the video, the hound dog can be seen jumping over the concrete barrier. He was reportedly recovered by authorities. The whereabouts of the German shepherd remain unknown and no owner has come forward to claim either of the dogs.

Attempts to reach the DRPA were not immediately returned.