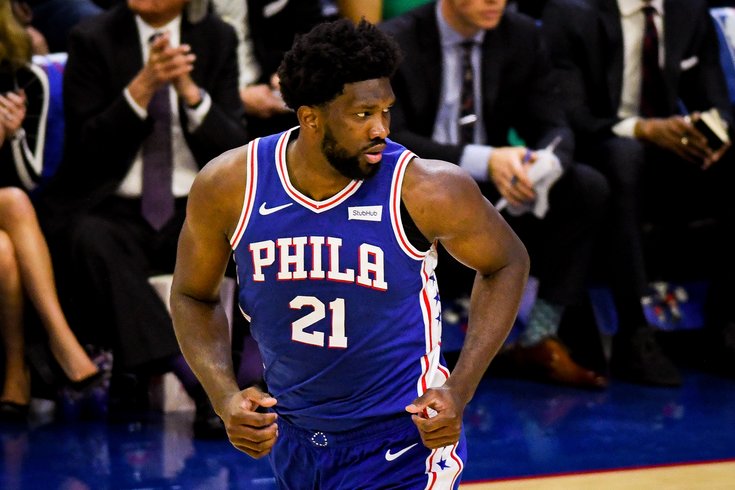 Joel Embiid will be returning to the Philadelphia 76ers soon.

The NBA appears set to return at some point later this summer, and the proposal is taking shape. Reports from Shams Charania of The Athletic and Adrian Wojnarowski of ESPN suggest the league will hold a vote on Thursday, June 4th on a 22-team format that will keep teams out of the playoff hunt at home, and potentially decide the eighth seed in each conference with a mini-tournament.

According to Charania, this is how the proposal is expected to look:

Wojnarowski, meanwhile, says each team that returns will play another eight games for seeding purposes, with the current 1-8 seeds in each conference joined by the Pelicans, Blazers, Suns, Kings, and Spurs in the West, along with the Wizards in the East.

Though a vote still needs to take place, it seems like a formality at this point, so this is what we'll likely see whenever the games begin again later this summer. A few scattered thoughts/questions on what this means for the Sixers, the league, and opinions on the format below.

• Bringing the league back without jumping straight into the playoffs is an idea that makes sense on paper. With NBA teams months removed from their last competitive basketball games, establishing a level of rhythm and fitness before the games get going again is important. Nobody wants the NBA playoffs to be weighed down by, well, the weight of players who put on some quarantine baggage like many others around the country.

That said, there are some remaining questions about how they'll structure the schedule. With seeding the most important thing to figure out during those eight games, how will the league balance a schedule that must be changed with eight of the league's teams staying home? Homecourt advantage has obviously gone up in smoke, but some thought will have to go into reimagining the schedule without tipping the scales toward a team or multiple teams.

The eight-game number, of course, is one that allows all teams left to clear the 70-game threshold, one that doesn't mean anything to the general public but is important for many payouts in team deals with regional sports networks around the country. As a means to recoup money, this will help make up for some, but certainly not all of the lost revenue.

• How do the Sixers stand to benefit from this? They have the potential to change their seeding fate, for one. Stuck at sixth in the Eastern Conference when the league was suspended, the Sixers have an identical record as the fifth-seeded Pacers, and could easily make up ground in the standings during the eight-game return before the playoffs.

A better question is whether it actually benefits them to do so. Making sure Joel Embiid and Ben Simmons are hitting their stride and in-game shape before the playoffs is an important matter, but there's an argument to be made they're better off staying where they are in the standings. If there are no changes to the standings as they sit in early June, the Sixers' run to the Finals would require wins over (if things go chalk) Boston, Toronto, and then Milwaukee in the Conference Finals. For the first time in a long time, they've had success against the Celtics this year, and delaying the Bucks matchup as long as possible is what they should be hoping for.

Moving up to the five seed (or even the four seed) on the other hand would put them up against a Miami team in the first round they've been up and down against, one who perplexed them with zone at times. Then you'd have to play Milwaukee in round two just to get to the Eastern Conference Finals. Some Sixers fans like how they match up with Milwaukee, but they've been considerably better than the Sixers each of the last two seasons.

The loss of homecourt, obviously, feels like it could be a huge deal for the Sixers, but since none of these games will be played in an environment we have a frame of reference for, I'm not inclined to speculate on who is hurt or helped one way or another by the neutral site games.

• As for the play-in tournament, it's an idea I don't think is meritless in a general sense but seems a little bit ridiculous to just shoehorn in for this season. Part of the point of playing more regular-season games, at least to me, is to allow seeding to shake out as naturally as possible and reward the teams that played the best over the NBA's long-haul. By the time it's all said and done, there will have been plenty of time for teams around the league to prove they deserved to be one of the 16 playoff teams.

If having the play-in tournament as part of the proposal is meant to be a novel idea that will draw people to the product, my counter would be that people are desperate for any sort of sports content right now. Millions lined up to watch freaking Tom Brady play golf, for example. If you put the product on TV, people are going to turn it on and watch, and I don't think that's more complicated than that.

The only stumbling block for the league on that front, of course, is competing with other sports. The longer the NBA makes this season, and reports have suggested mid-October is the absolute drop-dead date, the more they run the risk of being dwarfed by football. While adding two more games for a "tournament" wouldn't take much time, it's one of many factors (including any complications that may arise from the bubble scenario/pandemic situation) that could force the league to drag it out longer than is necessary. Even as someone who considers basketball their favorite sport and would always watch playoff basketball over anything else, once you find yourself in a place where you have to compete against the NFL for eyeballs, you're fighting a losing battle.

But anything that can generate more revenue for the league is going to be thrown in right now, so it's something I guess I'll have to get on board with as I yell at these crazy kids to get off my lawn. Basketball being back in any form will be a relief.